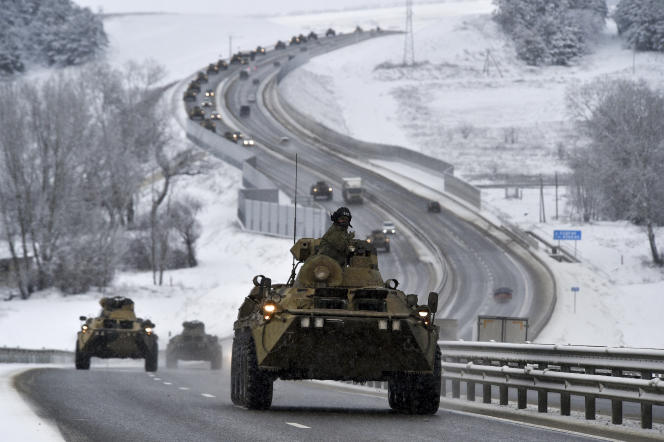 The United States firmly rejected, on Wednesday January 26, in its written response to Russia, one of Moscow’s main demands, by refusing to close the door of the North Atlantic Treaty Organization (NATO) to the Ukraine. However, Washington claims to have offered a “diplomatic way” to avoid an armed conflict.

This long-awaited letter delivered by the American ambassador to the Russian Foreign Ministry comes against a backdrop of extreme tensions on the Russian-Ukrainian border, where Washington has said it expects a possible imminent attack by Russian forces.

The tone has steadily risen in recent months around Ukraine, with Moscow being accused by the West of having moved tens of thousands of soldiers to the Ukrainian borders for an offensive. Russia, for its part, demands guarantees for its security, including the rejection of Kiev’s membership of NATO.

Search for “a serious diplomatic channel”

“Everything indicates” that Russian President Vladimir Putin “will use military force at some point, perhaps between now and mid-February,” said US Deputy Secretary of State Wendy Sherman. The latter, however, stressed that the opening of the Beijing Winter Olympics on February 4, which the master of the Kremlin will attend, could influence “his calendar”, to avoid offending his ally, the Chinese president. Xi Jinping.

In the letter delivered to the Russians, the United States made it “clear” that it was “committed to maintaining and defending Ukraine’s sovereignty and territorial integrity, and the right of states to choose their own security and their alliances”, hammered the head of the American diplomacy, Antony Blinken, in front of the press. The letter reaffirms “that we defend the principle of the open door at NATO”, he added.

Listen also Should we fear a Russian invasion in Ukraine?

Similarly, the Secretary of State forcefully reiterated Western warnings of an unprecedented response against Russia in the event of an invasion of the neighboring country.

However, he assured that this missive offered “a serious diplomatic channel if Russia so wishes” and said he was ready to speak again “in the coming days” with his Russian counterpart, Sergei Lavrov, whom he met Friday in Geneva.

The United States proposes to relaunch formal negotiations on “arms control”, in particular on the question of strategic missiles and nuclear weapons stationed in Europe. He also mentions “the possibility of reciprocal transparency measures with regard to our military positions as well as measures to improve confidence with regard to military exercises and maneuvers in Europe”, added Antony Blinken.

Read also Article reserved for our subscribers “Americans and Europeans have understood that beyond the fate of Ukraine, they too are under attack”

“A good signal in difficult conditions”

Along with this key step, Russian, Ukrainian, French and German negotiators met on Wednesday in Paris to try to lower tensions between Moscow and Kiev in the so-called “Normandy” format. The talks ended in the early evening.

“It is very encouraging that the Russians have agreed to reenter this diplomatic format, the only one in which the Russians are involved,” said the French presidency. “In the current context, we got a good signal today in difficult conditions,” she said. “We got the re-engagement signal we were looking for,” she added, as Emmanuel Macron is due to meet with Vladimir Putin on Friday.