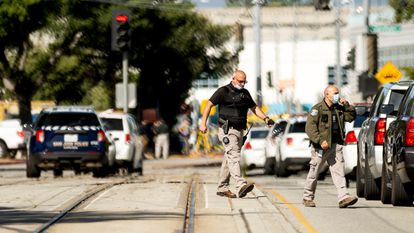 Authorities at the scene of the shooting, at the Santa Clara County Transportation Authority. Noah Berger (AP)

Last May it was the scene of one of the worst shootings in recent California history with a dozen dead, including the shooter. San José authorities have now taken a step forward to try to prevent a similar tragedy from happening again. The city, with a population of one million people, this week became the first in the entire United States to vote to require gun owners to carry third party damage insurance and pay $25 for each pistol or rifle. registered, which will be used to finance initiatives to reduce armed violence, one of the scourges of the North American country.

The measure is intended to shift the economic burden of accidents or shootings, including claims for damage or loss of life, to gun owners rather than cities and victims. “The second amendment to the Constitution protects the right to bear arms, but it does not require taxpayers to subsidize that right,” says the mayor of the city south of San Francisco, Democratic Mayor Sam Liccardo. The councilman assures that the cost of armed violence in his city is 40 million annually. At the state level this exceeds 1,400 million. The measure voted by the councilors will take effect in six months. The authorities will be able to remove the weapons from those who do not comply with the requirement.

The measure has not pleased gun owners, of course. These have already shown their annoyance this Wednesday and announced the first judicial offensive to try to nullify the initiative. A pressure group, the National Association for the Right to Arms, this afternoon described the law as a maneuver that restricts a constitutional right with taxes. They estimate that some 55,000 people will be affected by the new regulations, which “charge against law-abiding citizens for damages committed by criminals.”

The initiative now becomes a trial balloon in a progressive state that prides itself on its stringent measures to regulate gun ownership. California Governor Gavin Newsom vowed last month to use legal tactics similar to those used by Texas to ban abortion almost entirely. The president’s legal team is drafting a rule that will allow citizens to take legal action against manufacturers, distributors and sellers of weapons. The legislation, like the one in Texas that restricts the rights of women, promotes that private citizens and not the State take charge of the accusation, for which they could obtain up to 10,000 dollars in damages. This prevents the federal courts from declaring the measure unconstitutional.

The gun lobby is so powerful in the United States that it managed to get Congress to pass a series of laws in 2005 that shield gun manufacturers from litigation for damages to third parties, thus preventing them from taking responsibility for the damages they their products do. This immunity came after years of pressure from 40 cities, which sought during the 1990s through different lawsuits, that the companies pay victims and others affected. Every year firearms cause 23,000 suicides and 14,000 homicide victims in the United States. Another half a thousand people die annually from complications of gunshot wounds.

Liccardo, however, says his initiative has been inspired by auto industry practices on safety. “Reducing premiums for policy owners who have not had accidents or who buy safer cars have helped reduce fatalities by 80% in the last 50 years, saving 3.5 million lives,” says the mayor in a text published in Los Angeles Times. The rate that is intended to be collected will help, in his opinion, to finance programs to combat violence, which are always in need of a budget, in safety classes in the handling of weapons and in suicide prevention initiatives. The politician knows that the initiative will not end this type of violence by itself. But he believes that it is a step that had to be taken in the right direction.