200 diners, a single table and a natural environment: this is the latest gastro revolution

The most impressive of Outstanding in the Field (OITF), a project born in 1999 in California (United States) from which open-air communal dinners are organized for between 100 and 250 people, are the locations where all these strangers meet to eat and drink. From the port of Malibu to a family ranch in Idaho with the mountains in the background, passing through a vineyard in French Burgundy or a Mexican beach in the Yucatan. But there is more. The plan is for those invited to the celebration in Malibu to eat what that area of ​​the Pacific offers and listen to the skipper of a fishing boat explain his sustainable arts. Those who paid 285 dollars (about 250 euros) for a cutlery in a prairie in the American Northwest tried a menu made with what is grown there while a farmer told them about the indigenous varieties of wheat that his ancestors bequeathed to him. Or those who moved to the château from Burgundy accompanied their dinner with a pinot noir and a visit to the biodynamic cellars. 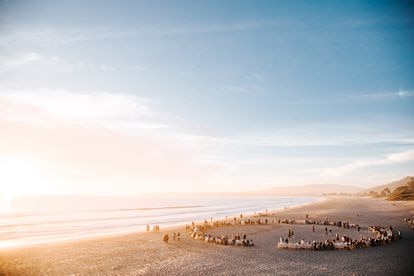 Dinner on the beach of Stinson, north of San Francisco (USA), where whales are sighted.Emily Hagen

This initiative has evolved into a large open-air restaurant that goes on tour supported by regular customers willing to visit another State or another country. Between 30% and 40% of the guests come from outside the place where the culinary and educational banquet is held. There are many customers, already parishioners, who have been attending for a decade. At a dinner in Japan, 14 different nationalities were counted.

The ideologue of this project is called Jim Denevan, he was born 61 years ago in California, as a young man he was a cook, he makes large-scale drawings in sand and ice —this is more his job— and he has an older brother who was a pioneer of organic farming in that coastal region of the western United States. Denevan attends by video call from there: “Spain, France, Italy… they are known for their culinary culture. In my country it was quite deficient. He wanted to take people to the origin of food. That it turned out to be something authentic, not propaganda; that they listen to the story behind the dishes and that the places were extraordinary”. This chef, who already wrote down where the ingredients came from on his restaurant menu decades ago, is clear about the key to his success: “All of this works because the act of eating with people is very powerful in any culture.” 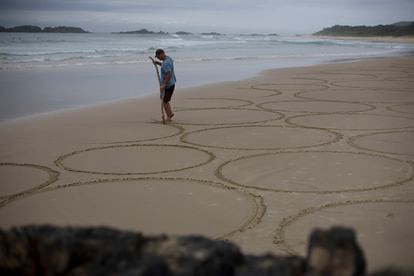 Jim Denevan makes one of his ephemeral works of art on a beach in New South Wales (Australia).Samuel Lindsay

It works because of what Denevan exposes and because the level of detail and sophistication that they have achieved is extremely high. They have already set the table in 18 countries, including Spain, with a visit in 2011 to a winery in La Rioja, and another two scheduled for this year: La Rioja again in the summer and San Sebastián coinciding with the celebration of the film Festival. They have worked with 700 chefs who have served 100,000 guests, with records in a single day such as the banquet they organized for 600 attendees in port 92 in New York and in which The Roots performed.

OITF, which has 15 employees on staff, was conceived in California and it is that State that monopolizes the largest number of celebrations. Doniga Markegard, who owns a ranch in the north along the coast, has hosted several dinners since 2014. Her 11,000 acres (4,452 hectares) graze cows and lambs, and her pastures feed pigs and chickens.

The immersion is such that some of these animals wander and ruminate around a huge table for 200 people. With others, already sacrificed, the menu is prepared. It is the kind of livestock farming of yesterday and tomorrow that is in danger today. The farm is huge but not macro. Markegard gets a little intense: “Food can be grown in a way that creates a reciprocal and regenerative relationship with the land or as an extractive industry that destroys everything.” And he continues: “We are a direct reflection of what we eat. These dinners are a journey hand in hand with the farmer and nature”.

The dinners, 1,239 in two decades, last about five hours and take place between sunset and night, when the dessert is served already lit by candlelight. Diners, who don’t know the menu until they sit down, are led on arrival through the ranch, farm, winery, or mezcal distillery, to name just a few examples of the hundreds of locations they’ve visited. The setting of the table is for artistic reasons, and the sun, wind and other elements are taken into account even if sometimes they cannot be controlled. The difficulty is great because it is not a farm prepared for celebrations, but rather a transformation of the space is required without altering anything that happens there. Dinner organized in the port of Malibu (California, USA).Brighton Denevan

As in weddings, the attention falls on two people: in this case, the host and the chef. “Some are highly reputed, with a Michelin star, like the Peruvian Virgilio Martínez, but we like to also have those who are making their way,” says Denevan, perhaps the third person to monopolize the spotlight, because when he attends dinners (three out of four) welcomes the guests and introduces them to the master cheesemaker if they are in a cheese factory, to the cider maker, to the farmer, to that captain of a fishing boat who is going to tell them what and how…, aware , Denevan, that in the ceremonies the important people receive the word, they do not take it.

She may not have attended as many dinners as the founder, but Californian Diane Leeds, who works in finance, knows OITF well. She has been attending these banquets since 2013. She assures that 95% of the time she goes unaccompanied, but that she never feels alone. “Here I have found my tribe,” he reveals. He loves to interact and values ​​the information he receives from the hosts, who have become teachers. “It is more important than ever to know where the food comes from,” explains this woman born in Sacramento, who does not forget the day that, after a downpour on an island in Massachusetts where one of these evenings was being organized, ants appeared with wings ready to eat. pair. Diners waved cloth napkins in the air as if at a wedding. The experienced Leeds reassured newbies and added humor: “What’s wrong with adding a little more protein to ceviche?” 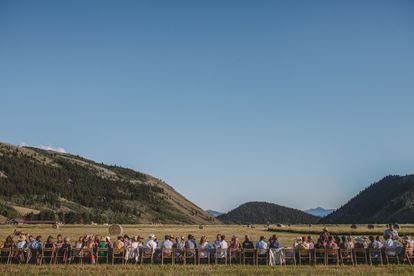 Meeting at the Mead Ranch in Jackson Hole (Wyoming, USA), in 2016. Neringa Greiciute

Denevan admits the rejection that a priori can generate a massive dinner with strangers. He recognizes that under normal conditions diners would try to separate instead of all coming together at the same table. But he likes to unite, to mix people with different mentalities and origins. It’s a business, of course, but Denevan is the kind of person who sits at the table with everyone. Be one in which there is food or negotiation proposals. Like your clients.