The black dog of Lourdes 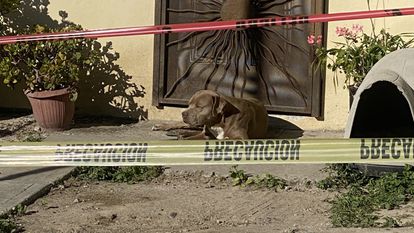 Lourdes Maldonado’s dog, in a photograph by journalist Yolanda Morales.RS

The human condition is something as twisted as it is mysterious, and Tijuana is its capital. The State had promised Lourdes Maldonado protection. She said that she feared for her life and they assured her that she would have police at her door, cameras or a panic button in case of imminent danger… But none of that came and a guy came up and shot her in the head where she was. Now this Annoying lying down

The cinnamon-colored dog had been motionless for 24 hours by the door of the house. In front of the animal, the street is a coming and going of journalists, coroners, authorities, investigators and police until someone notices the sad dog on the other side of the yellow tape and takes a photo that ends up breaking everyone.

With his head buried between his paws, he spent night and day motionless and without eating, watching over his owner under the lintel. Annoying He accompanied Lourdes and three other cats since a few years ago the journalist picked him up from the street and adopted him. Annoying He had a past in which he was fierce, then he became a beaten warrior and ended up being a song by José Alfredo: “There was a dog lying there, without eating and without sleeping / He wanted to look at his owner, he didn’t care about living / That’s how he died. black dog That enormous guardian / Who loved Gilberto very much and killed Don Julián”.

The fact is that, the next day, at their press conferences, none of those who had promised to monitor, investigate and protect the journalist, in short, to do their job, and had failed in their task, showed any regret. . Only Annoying he was the only one down. His eyes were two sad stripes that had not been able to fulfill the task of protecting her and at the door of the house the animal seemed the most human of all.

Throughout the month of January, with macabre punctuality, five people were murdered every day in a city of some two million people. So on Monday Tijuana continued its course. Cars frantically crossed the border again, the outdated souvenir shops on Revolution Street opened their doors, Haitian couples struggled against the cold on street corners, and Tijuana’s vibrant bilingual youth returned to the universities as normal as any Monday.

The profession woke up shattered. In a place like Tijuana, the profession It is a small group where everyone knows each other and who have to attend a colleague’s funeral for the second time in a week. Companions of chacaleos, coverage, canteens, press conferences and hours of waiting in front of the Prosecutor’s Office who cried yesterday in the newsroom or at home remembering that just a few days ago Lourdes took the microphone during a protest to remember the photographer Margarito Martínez during a vigil . There he said of him that “he is a young man who wins the raffle and is always the first to arrive. Well, excuse me…”, he corrected, “he was a young man who raffled off… I still can’t get used to talking about him in the past tense”. In the Plaza de Las Tijeras, he asked for speed in the investigation and the creation of an award in his honor that would bear his name to recognize the best photographer of the year. A few days after that they went for her without much logistical sophistication. If the photographer’s murder caused outrage, the Lourdes murder leaves a deep sense of loneliness.

Among so much decomposition, the first drop of life came at nightfall. When journalists, coroners, authorities, investigators and police officers had left the place, a girl in pajamas subtly approached the yellow tape that cordoned off the house. The girl walked, crouched down gently and whispered to the cats to let them know that she had arrived with food. On the other side of the yellow line he left another plate for Annoying. The next day, her neighbor Xiomara came to take the cats and another one to convince Annoying that you had to eat and walk for a while. Thus, little by little, signs of affection began to flourish near the door where before there had been a wasteland and a song by José Alfredo. Lourdes’s relatives had not yet come to recognize the body, but her family was already cared for. 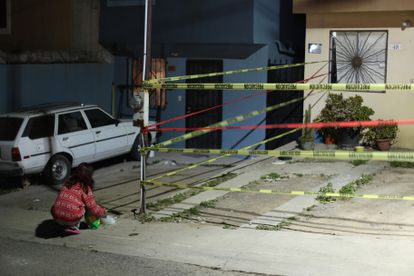 A girl in pajamas subtly approached the house to feed the cats of the journalist Lourdes Maldonado. Omar Martínez/Cuartoscuro