Petro, Fajardo and Gutiérrez will participate in the first Prisa Media electoral debate for the elections in Colombia 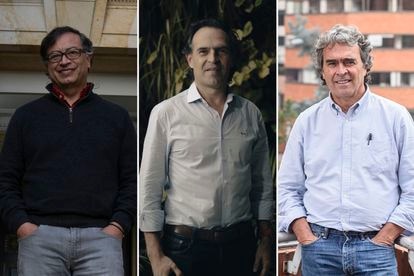 Colombia lives a key year. In 2022, legislative and presidential elections will be held that will mark the future of the country and the recipes to get out of the socioeconomic crisis caused by the pandemic. The pools for the presidency are still very open, waiting for the consultations of the different coalitions, which will be held in March, to designate the candidates. Prisa Media wants to accompany these key events for all Colombians and this Thursday it will hold the first major electoral debate between the three best-positioned candidates at this time in the polls: Gustavo Petro, Sergio Fajardo and Federico Gutiérrez. This first electoral appointment, which will be moderated by the journalist Roberto Pombo, can be followed from 7:00 in the morning (Colombian time) through the website of EL PAÍS, which organizes the debate together with Caracol Radio, W Radio, Tropicana , Bésame, Oxígeno, Radioacktiva, Los40, Radio Santa Fe and Q´Hubo Radio.

The left-wing leader Gustavo Petro is the one with the clearest path to prevail in the consultation of the Historical Pact. At this time, Petro is the only candidate who is considered to have a guaranteed candidacy for the first round of the presidential elections, which will be held on May 29. The former mayor of Bogotá is the rival to beat for all and has been leading the polls for months, but we have to wait for the rest of the candidates to be defined to see a more accurate picture of the battle for the presidency.

Fajardo is the candidate with the most options to lead the Centro Esperanza Coalition, but the contest for the center is still very open. The leader of New Liberalism, Juan Manuel Galán, follows him very closely and the landing last week of Ingrid Betancourt in the race for the presidency has yet to be measured. The seven pre-candidates who have come together around this coalition of the center present themselves as the moderate option and away from the electoral machines against what they consider to be two extremes, to the left and to the right.

The most uncertain battle, however, remains on the right. With Uribismo going through its worst political moment in two decades, eyes are on the so-called coalition of mayors, which moves an enormous regional power. Federico Gutiérrez, the former mayor of Medellín, stands out slightly as the first option to lead the coalition, according to the latest Invamer poll, although he is practically tied with Alejandro Char. Gutiérrez declares himself independent but for many analysts this is Álvaro Uribe’s covert letter, aware that his party has already lost the pull necessary to re-impose itself at the polls.

Citizens will attend in this debate the discussion between three models, the left, center and right. In Colombia the left has never governed and, in the heat of the polls, Petro faces the electoral campaign with a triumphalist air. The leader of the Historical Pact already reached the second round in 2018, but lost against the Uribe candidate and current president, Iván Duque. The figure of the leftist generates fear in a part of Colombian society, especially in the economic field, so that his hypothetical passage to the second round would once again activate antipetrism, which would close ranks with any other candidate.

The center tries to capitalize on that voter who does not even want Petro and is tired of Uribeism, but the multiplicity of voices in the coalition, with up to seven candidates, and the absence of a leader or a clear program reduce its impact among voters. Fajardo puts his experience in the Medellín mayor’s office as an endorsement and his political career. In the presidential elections of 2018, he was only a handful of votes short of going to the second round, which was reached by Uribismo and Petro.

News channel says sorry for crazy texts in the picture