“Give us, Lord, the courage to change direction”, begs Pope Francis at the end of the Week of Unity 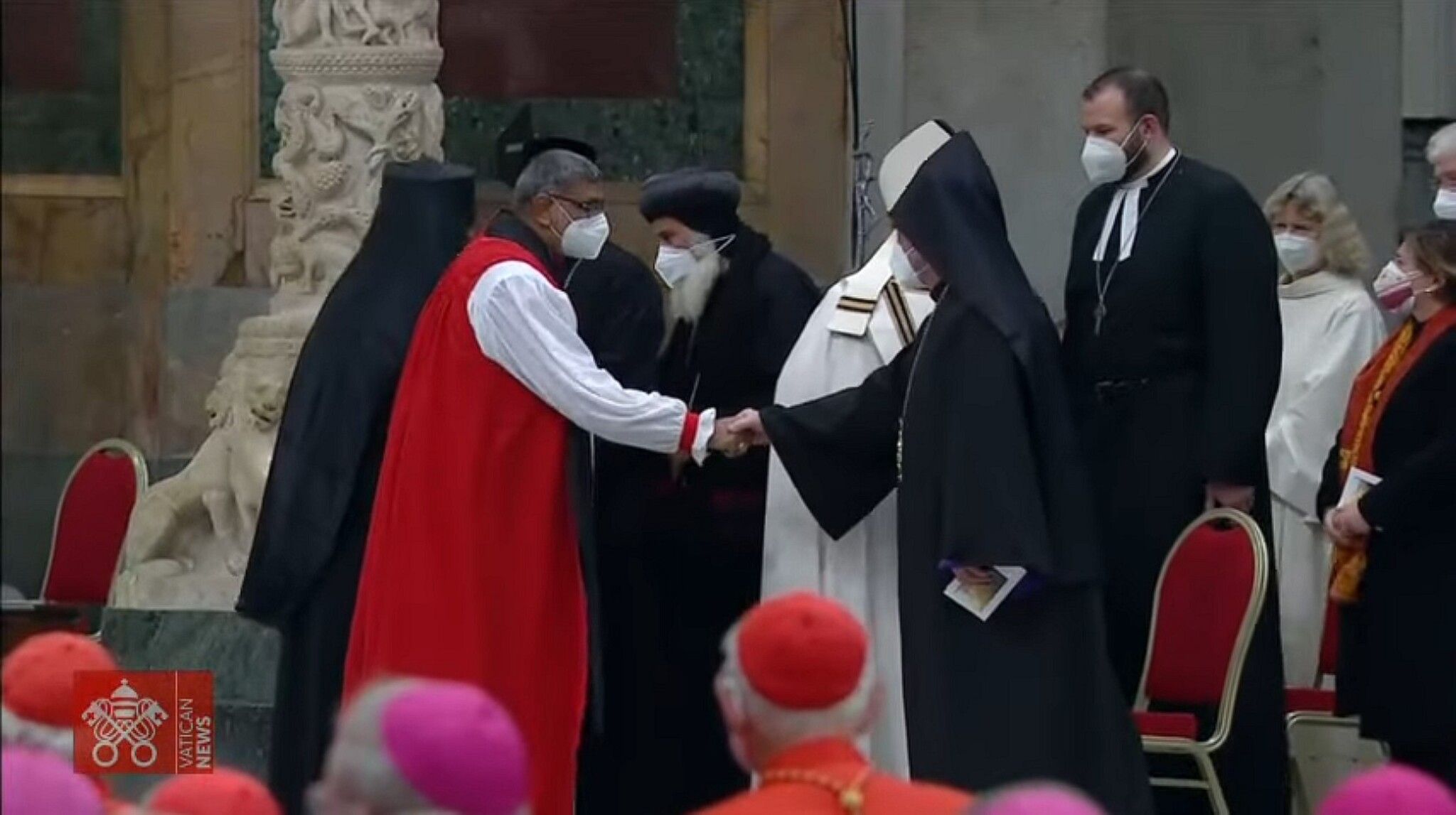 Before sharing some thoughts with you, I would like to express my gratitude to His Eminence Metropolitan Polykarpos, representative of the Ecumenical Patriarchate, to His Grace Ian Ernest, personal representative of the Archbishop of Canterbury in Rome, and to the representatives of the other Christian communities present . And thank you to all of you, brothers and sisters, for coming to pray. I especially greet the students: those of the Ecumenical Institute of Bossey, who are deepening their knowledge of the Catholic Church; the Anglicans of Nashotah College in the United States of America; Orthodox and Eastern Orthodox who study with a scholarship offered by the Committee for Cultural Collaboration with the Orthodox Churches. Let us welcome the deep desire of Jesus who wants “all to be one” (Jn 17:21) and, by his grace, let us walk towards full unity!

May the Magi help us on this path. Let’s look at their itinerary tonight, which has three stages: it begins in the East, passes through Jerusalem and finally reaches Bethlehem.

1. First of all, the Magi leave “from the East” (Mt 2, 1), because from there they see the star rising. They set out from the East, where the light of the sun comes from, but they go in search of a greater light. These sages are not content with their knowledge and traditions, but they desire more. This is why they face a risky journey, animated by the anxiety of the search for God. Dear brothers and sisters, we too follow the star of Jesus! Let us not be deflected by the dazzling lights of the world, the light of bright stars but shooting stars. Let’s not follow the fashions of the moment, meteors that are dying out; let us not pursue the temptation to shine with our own light, that is to say, to shut ourselves up in our group and to preserve ourselves. Let our gaze be fixed on Christ in Heaven, on the star of Jesus. Let us follow him, his Gospel, his invitation to unity, without worrying about the duration and difficulty of the journey to fully achieve this unity. Let us not forget that, looking at the light, the Church, our Church, on the path to unity, continues to be the mysterium lunae. Let us desire and walk together, supporting each other, as the Magi did. Tradition has often depicted them with varying clothing, representing different populations. In them, we can see the reflection of our diversities, of our diverse Christian traditions and experiences, but also of our unity born of the same desire: to look up to Heaven and walk together on earth. Walk.

The East also reminds us of the Christians who inhabit various regions ravaged by war and violence. The Middle East Council of Churches has prepared helpers for this Week of Prayer. These brothers and sisters who are ours face many difficult challenges, but with their witness they give us hope: they remind us that the star of Christ shines in the darkness and does not go out; that, from above, the Lord accompanies and encourages our steps. Around him, in Heaven, shine together many martyrs, without distinction(s) of confession: they show us, to us on earth, a precise path, that of unity!

2. From the east, the Magi arrive in Jerusalem with the desire for God in their hearts, saying, “We have seen his star rise and have come to worship him” (v. 2). But from the desire of Heaven, they are brought back to the harsh reality of the earth: “When King Herod heard this – says the Gospel – he was troubled and all Jerusalem with him” (v. 3). In the holy city, the Magi, instead of seeing the light of the star reflected, come up against the resistance of the dark forces of the world. It was not only Herod who felt threatened by the novelty of a royalty other than that corrupted by worldly power, there was all of Jerusalem to show itself disturbed at the announcement of the Magi.

Along our path towards unity, it can also happen that we stop for the same reason that paralyzed these people: trouble, fear. It is the fear of novelty that shakes habits and acquired certainties; it is the fear that the other will disturb my traditions and my consolidated patterns. But, at the root, there is the fear that dwells in the human heart from which the risen Lord wants to free us. Let us let his Paschal exhortation resound on our journey of communion: “Do not be afraid” (Mt 28, 5.10). Do not be afraid to put our brother before our fears! The Lord wants us to trust one another and walk together, despite our weaknesses and our sins, despite past mistakes and mutual wounds.

The story of the Magi also encourages us in this direction. In Jerusalem, a place of disappointment and opposition, precisely where the path indicated by Heaven seems to break against the walls erected by man, they discover the path to Bethlehem. It is the priests and scribes who provide the indication, scrutinizing the Scriptures (cf. Mt 2:4). The Magi do not find Jesus only thanks to the star, which has meanwhile disappeared; they need the Word of God. We Christians too cannot reach the Lord without his living and effective Word (cf. Heb 4:12). It was given to all the People of God to be welcomed, prayed for so that it could be meditated on with all the People of God. Let us therefore draw near to Jesus through his Word, but let us also draw near to our brothers through the Word of Jesus. His star will rise again in our path and bring us joy.

3. This is what happened to the Magi when they reached the final stage: Bethlehem. They enter the house, prostrate themselves and adore the Child (cf. Mt 2, 11). This is how their journey ends: together, in the same house, in adoration. The Magi thus prefigure the disciples of Jesus who, different but united, prostrate themselves, at the end of the Gospel, before the Risen One on the mountain of Galilee (cf. Mt 28:17). They thus become a sign of prophecy for us, longing for the Lord, traveling companions on the roads of the world, seekers through Sacred Scripture of the signs of God in history. Brothers and sisters, for us too, perfect unity, in the same house, can only come from the adoration of the Lord. Dear sisters and dear brothers, the decisive step on the way to perfect communion requires more intense prayer, it requires adoration, it requires the adoration of God.

But the Magi remind us that, in order to adore, there is a step to take: you must first prostrate yourself. This is the way, to bow down, to put aside one’s own pretensions to leave only the Lord at the centre. How often has pride been the real obstacle to fellowship! The Magi had the courage to leave their prestige and their reputation at home, to humble themselves in the poor little house of Bethlehem; they thus discovered “great joy” (Mt 2:10). To humble oneself, to leave, to simplify: let us ask God this evening for this courage, the courage of humility, the only means of coming to adore God in the same house, around the same altar.

In Bethlehem, after prostrating themselves in adoration, the Magi open their coffers and gold, frankincense and myrrh appear (cf. v. 11). It reminds us that it is only after having prayed together, it is only before God, in his light, that we truly realize the treasures that each one possesses. But these are treasures that belong to all, which must be offered and shared. They are indeed gifts that the Spirit intends for the common good, for the edification and unity of his people. And we become aware of this by praying, but also by serving: when we give to the needy, we offer to Jesus who identifies himself with those who are poor and with the marginalized (cf. Mt 25, 34-40); and it unites us among ourselves.

The gifts of the Magi symbolize what the Lord wishes to receive from us. Gold, the most precious element, because God is in the first place. It is to him that we must look, not to ourselves; do his will, not ours; follow his ways, not ours. If the Lord is truly in the first place, our choices, even ecclesiastical ones, can no longer be based on the politics of the world, but on the desires of God. And then there is incense, to recall the importance of prayer which ascends to God like a pleasant odor (cf. Ps 141, 2). Let us not tire of praying for each other and with each other. Finally, the myrrh, which will serve to honor the body of Jesus taken down from the cross (cf. Jn 19:39), refers us to the care of the suffering flesh of the Lord, torn in the limbs of the poor. Let us serve the needy, let us serve the suffering Jesus together!

Dear brothers and sisters, let us welcome the indications for our journey from the Magi; and do like them who returned home “by another way” (Mt 2:12). Yes, like Saul before the encounter with Christ, we need to change our way, to reverse the course of our habits and our proprieties to find the way that the Lord shows us, the way of humility, the way brotherhood, adoration. Give us, Lord, the courage to change direction, to convert, to follow your will and not our perspectives; to move forward together, towards You, who with your Spirit want to unite us. Amen.