“Get us out of your war”, the cry of a young victim of violence in Colombia 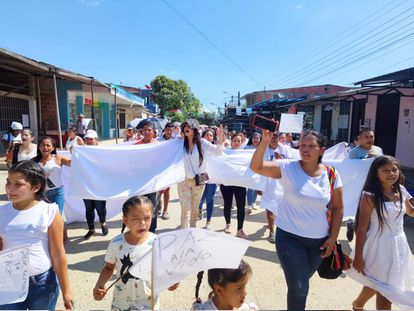 In the center and with a checkered hat, Mayerly Briceño, in a march for peace in Arauca.

Mayerly Briceño is heard on the phone as indignant as she is seen in the videos, which have made her popular in recent weeks. “The people are afraid, but we are not going to resign ourselves and we are not going to allow ourselves to relive that time of pain and violence that we have already experienced. The people are not willing to continue shedding blood”, he says looking at the camera. Behind her walk dozens of people dressed in white and with signs asking for peace. His region, Arauca, on the border with Venezuela, has experienced a violent start to the year. On the third day of January, the murder of more than 30 people was recorded in the midst of the territorial dispute between ELN guerrillas and former FARC dissidents. “At least 400 people have had to move,” says Briceño who, at 26, knows well what it is like to have to flee because of the war.

He says that when he was five years old, his family had to leave the house where he lived due to the siege of armed groups. He grew up in Botalón, a small hamlet rich in banana production and known for its livestock, a neighbor of Tame, one of the targets of violence in that area. Briceño says that when she was a child there were warnings about which roads not to tread because a mine could explode. “We believed that this was the only possible way of life, we got used to it being ‘normal’ not being able to go to the school soccer field because suddenly it was mined or to take a single path to go from one place to another and so on. prevent something from exploiting us if we ventured to take another route,” she says from Bogotá, where she arrived over the weekend accompanied by other Araucanians to denounce the violence they are experiencing.

Since January 2 there is only bad news about Arauca. On the 3rd, fighting between armed groups in the area left around twenty dead and forced hundreds of families to abandon their homes. This week a medical oxygen company was attacked with an explosive. A few days earlier, on January 20, a car bomb exploded in the center of Saravena, leaving two dead and five injured. “We are victims of the breaking of a pact between the ELN and the FARC dissidents, the bomb cylinders returned, the displacements,” says Briceño, who is part of the Colombian Network of Youth Leaders-Red Kolumbien.

Juan Pappier, an expert for Colombia at Human Rights Watch, warned this newspaper a few days ago that the region could revive the conflict that plagued the population for decades due to the apparent rupture of the alliance between the ELN and a FARC dissident. . “We have received serious reports of deaths, forced displacement and kidnappings. It is urgent that the authorities take measures to protect the civilian population and assist the victims”, Pappier warned earlier this year. But the calls to address the crisis in that region have not been heeded. Briceño says that the military presence is not enough. “Get us out of your war. We are in the middle of the crossfire, we already know what it is to live under that horror. The way out is not more military, we have already seen that this has not worked, we need a way out through dialogue”, says the leader, who denounces that they have not finished registering an attack, when another is already taking place. This Monday, the national media spoke of a new harassment in the region. FARC guerrillas had thrown cylinder bombs at Army troops. There were no deaths, but the citizens lived another day in the middle of the war.

Briceño assures that in his town there are people with a suitcase with clothes ready in case he has to flee. “Everyone is scared,” he says. In many towns in Arauca, at six in the evening there is no one on the streets. There are curfews and the population lives in fear. Kidnappings are back. Human rights organizations reported two kidnappings last week, almost simultaneously. While the families of four people celebrated their release after several days at the hands of armed groups, three others were kidnapped elsewhere in the region. People no longer know what to do to protect themselves. A local inhabitant told the newspaper The Colombian that he had had to get his family out of hiding in a truck loaded with bananas. “I couldn’t let them take another son and never hear from him again,” he explained.

Violence targets everyone. This Tuesday, journalist Emiro Goyeneche, director of a community media outlet, received a death threat. “[Recibí] a pamphlet from the 28th front of the FARC, where they threatened me as a journalist, as director of a community media outlet in the region. We, since the conflict between the two insurgencies began, between the dissidents of the FARC and the ELN, the truth is that we have not issued any statement from the two guerrillas,” the man told national media.

The system for peace, made up of several instances such as the Special Jurisdiction for Peace (JEP), urged the Government to open the way for dialogue with the armed groups. “What is happening and the threats that are being made against the population require a humanitarian response that discourages further attacks against the life, freedom and integrity of the inhabitants of this territory,” the JEP said in a statement. .

“Arauca is at the limit,” says Briceño. In addition to the crisis of violence, the region faces a political challenge. The governor, elected at the polls, was captured for alleged links to criminal organizations. A former Army general has been appointed as the person in charge for his alleged relationship with the murders of young people who were passed off as guerrillas killed in combat, in the case known as “false positives.”

Subscribe here to newsletter of EL PAÍS America and receive all the informative keys of the current situation in the region.