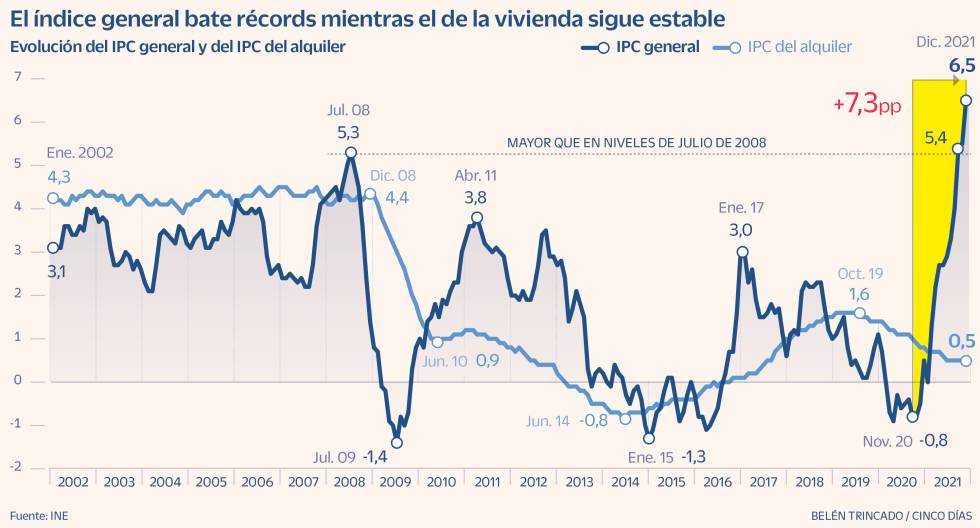 The escalation of inflation has led many tenants to be interested in possible formulas that allow them to minimize the update of the rental income according to the Consumer Price Index (CPI). The objective is none other than to avoid an increase in prices that, in the case of contracts signed on February 1, will exceed an average of 500 euros per year in Spain, according to the latest estimates from real estate portals. This defense route, advances Alejandro Fuentes-Lojo, an expert lawyer in real estate law, goes through alleging “a lack of clarity” in the clause that refers to the contract to the IPC.

The rental price is usually updated annually in Spain in reference to inflation, the expert recalls. A contract referenced to February 1, for example, would be updated with the latest official data published by the National Institute of Statistics (INE), released in mid-January. In this case, the rate would correspond to 6.5% of the month of December, in such a way that a rent of 800 euros per month would become more expensive by about 53 euros per month, more than 600 euros at the end of the year.

With runaway inflation and prospects that indicate that the trend will continue at least during the first half of 2022, Fuentes-Lojo details that there is “a defense path that many tenants propose and that has a legal basis.” Everything happens, he continues, by hiding behind “the lack of clarity of the clause” regarding the update of the income, since, as a general rule, “this usually speaks of the CPI, without specifying whether it refers to the general CPI or to that of the housing rental”, he points out.

The official data published monthly by the INE allow us to see how general inflation has progressed. This is the rate that is usually taken to analyze the purchasing power of households, what effects inflation may have on consumption, or whether workers have gained or lost purchasing power. However, within all the subgroups that Statistics collects within the general CPI is that related to housing rental. It is this that Fuentes-Lojo suggests mentioning. “The contracts are usually referenced to the IPC to dry, without specifying if it is one or the other. Bearing in mind that we are talking about rental housing, it might seem reasonable that this point be raised”.

Legal sources specializing in urban leases point out that, effectively, most current contracts do not usually specify that the index they refer to is the general one, although this is usually understood. The document guidance model itself offered by the Ministry of Transport, Mobility and Urban Agenda, for its part, does not directly adhere to the general CPI either. “It is true that in the legal field the lack of specificity usually benefits the most vulnerable or weak party,” they explain.

To date, Fuentes-Lojo continues, it has not been necessary to look for this type of legal loophole because the general CPI, to which rental contracts are usually linked by rule or custom, has been stable or even negative. For its part, the largest year-on-year increases in recent years, of a one-off nature, have barely exceeded 3%. “For this reason, many landlords have not even communicated to their tenants that they wanted to make this increase.” Now, with advances of up to 6.5%, the situation has changed, “and this means of defense seems interesting and new to us. It can force you to sit down jurisprudence”.

In parallel, Fuentes-Lojo points out, the owner could try to claim that the IPC, by itself, refers to the general index. In turn, if the parties had already updated the rent in a previous year based on the general CPI, it would be practically impossible for the tenant to change the criteria.

If it reaches a good port, the formula would be an undoubted relief for the pockets of the tenants. Not in vain, while the general CPI has been climbing throughout 2021 until closing the last month of the year at 6.5%, the housing rental CPI has been falling from 0.8% annually in January to 0.5% annual in December.

In this case, a monthly rent of 800 euros that had to be updated in February would only become more expensive by four euros per month, less than 50 euros after a year.

The projections of the main analysts foresee that during the year 2022 inflation will continue at high levels. The Bank of Spain forecasts that prices will rise by an average of 3.7% in the country, a percentage that falls to 3.2% in the case of the Organization for Economic Cooperation and Development (OECD). In both cases the main pull would come from the first half of the year. Although they could revise their figures, the International Monetary Fund (IMF) forecasts that the increase will fluctuate between 1.5% and 2%, while the European Commission, for now, trusts a rise of 2.1%.

How the rent update works

The updating of rents according to inflation has a series of rules. As explained by Macarena Redondo, a lawyer at Legálitas, not all rentals work under the same pattern. In general, in contracts signed before March 31, 2015, when the last major reform was made, the owner has the right by law to update the rents according to the price increase after the year of signing between landlord and tenant . However, “the landlords who have closed the contract as of April 2015 will only be able to update the rent if this is reflected in the document.” In both cases, adds Redondo, the tenant must receive an official communication from the landlord. In recent months, confirms the lawyer, there has been a barrage of inquiries about this issue.

With the 2015 amendment, continues Redondo, the legislator also introduces the possibility for the parties to agree on the updating system they deem. “What happen? That it is not a usual clause because the citizen is not aware of this issue, which is why the typical CPI clause is usually signed”.