Tadeo Case: The PAN denounces more thefts of corpses in the Iztapalapa pantheon

The local deputy of the PAN, Federico Döring Casar, accused the capital government of hiding the information and “make up” it, as he assured that the theft of the body of baby Tadeo, “is not an unprecedented event”, since for more than a year they have Illegal exhumations have occurred in the San Nicolás Tolentino pantheon.

“It is necessary to clarify the situation and, above all, to know the details of this and the other events that have occurred in this pantheon”

When going to the cemetery this Tuesday morning, accompanied by Daniela Álvarez, also a local PAN deputy, a member of the Citizen Parliamentary Association (APC), it was to personally verify the conditions of the place and demand justice.

“We demand answers and find out who is responsible for the corruption that made possible the illegal exhumation of the body of baby Tadeo, whose remains, as is known, were found in a prison in the state of Puebla,” said the legislator.

Döring Casar explained that he found out that the administrator of the San Nicolás Tolentino pantheon was removed from his post, “when they should have held him criminally responsible, because the fact warrants it. It is not enough just to fire him. It is necessary to clarify the situation and, above all, to know the details of this and the other events that have occurred in this pantheon”, he insisted. 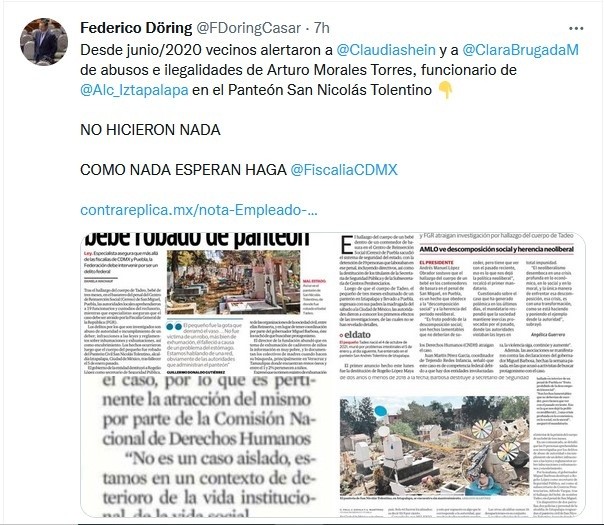 He added that “the 4T government tries to hide the information and cover it up; the spokesperson for the local Prosecutor’s Office is lying. This is not an unprecedented fact, as the head of government lied saying last Sunday,” he stressed.

Given this, Döring and Álvarez demanded that the head of government, Claudia Sheinbaum, stop lying and hide the information.