The day in 2018 that Rosalía (San Cugat del Vallés, Barcelona, ​​28 years old) appeared on Cadena SER to present The bad want everyone wanted to see her up close. Your interview on Window that November raised an expectation among the station’s workers that, according to the host of the program, Carles Francino, had not happened with other distinguished guests such as various presidents of the Government, Nobel Prize winners or Richard Gere. She was 25 years old at the time and had two albums on her resume, but her conversation captivated some interviewers who referred to her with hyperbole and flattery and compared her to Miguel de Molina. the architect of Badly He dazzled explaining his creative process, the variety of his influences and the intention of his work. Francino compared her overwhelming success to a paranormal phenomenon and paraphrased Gil de Biedma to explain that she had succeeded because she was “very good and very different”, while looking at her with shining eyes.

And it wasn’t just him. Martín Guerrero, the general director of Casa Patas, a temple of flamenco in Madrid, connected via recording to contribute that Rosalía was “electrifying, amazing and unique”. In the comments of video of the interview on Youtube, which has more than half a million views, the entertainment accumulates. “I felt in her vocabulary and way of thinking a prepared woman, who knows what she is talking about in terms of music and musical and historical knowledge. She is not an ordinary girl. She is a genius”, wrote a spectator.

Rosalía thus received applause and approval in one of the sanctuaries of Spanish progressivism, Cadena SER, compass of prestige and what is culturally and socially acceptable. Francino, sensing what was coming to the new pop star, said goodbye to her like a proud patriarch who kisses his daughter on the forehead before leaving the nest, imploring her simply one thing: “We only ask you, Rosalia, don’t change.” I couldn’t have asked anything more impossible of him. 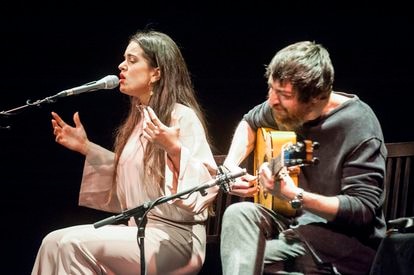 Rosalia during a concert with Raul Refree at the Teatro Lara in Madrid in March 2017, when she presented her album ‘Los Angeles’.Getty Images

Little more than three years later, the public awaits with interest the third album by the Catalan artist, Motomami, which will arrive sometime in 2022. Rosalía has been advancing some songs on the album such as Candy The Saoko on their social networks, but the song that has attracted the most attention is Hentai, a slow ballad sung on the piano whose lyrics have provoked stupefaction and incredulity and quickly became a meme for its explicitly sexual dimension and its use of spanglish. “I love you ride like me bike / make me a tape way spike / I beat it until it was mounted / the second is screwing you / the first thing is God”, he sang in a clip of just over 20 seconds. The cultured, lofty artist who quoted poetry from past centuries sounded like someone else entirely.

It has not been a sudden change. From The Angels, debut in which Rosalía quoted Niña de los Peines, Enrique Morente, Lorca or Conchita Piquer, the explicit and visceral Hentai, five years have passed. In that five years Rosalía has gone from 24 to 28, has gone through a pandemic that isolated her in Miami for the first time away from her family, has toured Latin America and has rubbed elbows with figures from the front line of the international industry. A few months ago I published a collaboration with the Dominican rapper Tokischa, Linda, a feminist statement whose lyrics (“you are pretty, I am rulin ‘ / we kiss but we are homies”) surprised his fans by his childish character. “It is true that on his first two albums there was not a bad rhyme, his lyrics were excellent. And on the other hand, in his latest songs there are terrible ripos and rhymes”, says Jorge Carrión, coordinator of the book La Rosalía, essays on good love (Nature’s mistakes). 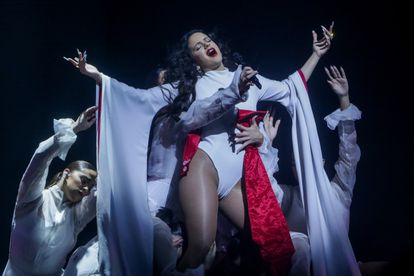 Rosalia at a time of her concert at Madrid’s WiZink Center in December 2019, closing her tour of ‘El Mal Querer’. Ricardo Rubio / Europa Press (Europa Press via Getty Images)

It is impossible to separate Rosalía’s new music from a tour of America that she herself has documented in detail. Like many other current stars, he has opted for an overexposure on social networks where he has shown each step without an apparent communication strategy. His surprising friendship with Kylie Jenner and the rest of the Kardashian clan, apparently very close, was one of the first clashes. We have seen her surrounded by entrepreneurs like Dave Grutman and Jonathan Cheban, leading an opulent lifestyle (VOX criticized her for being a millionaire and having a private plane) and surround yourself with celebrities like Christina Aguilera, Drake, Naomi Campbell and Hunter Schafer from Euphoria. Based in Miami, she has begun to express herself in the same way as other Spanish emigrant singers of the past, such as Julio Iglesias and Alejandro Sanz, with an accent that the Argentine newspaper Clarion defined as “indecipherable, a mixture of Spanish, Catalan, Andalusian and Caribbean, sprinkled with words in English”. In an interview with a Dominican media outlet, Rosalía explained the origin of her idyll with the Kardashians by saying that she simply began to “cheer” with Kendall “in elei”, referring to Los Angeles.

Rosalía’s self-portrait on her social networks collides head-on with the preconceived image of an avant-garde artist who published two conceptual albums exploring mourning and sexist violence. On her Instagram and TikTok accounts we see a giggly, exhibitionist and sexual young woman, who often posts half-naked photos of herself sporting impossibly long gel nails and heavy makeup. She is obsessed with her chihuahua dog and loves cars and motorcycles, to the point of buying a Ford Ranger Raptor valued at 60,000 euros with pink upholstery and “La Rosalía” embroidered on the headrests. Sometimes she imposes a certain childish attitude, like a character from one of the anime series of which she is a passionate fan. On TikTok he published a photo with the text “POV: When I stole Raul’s mobile and he has Face ID” [sic], a message with misspellings that is difficult to understand for those who are not aware of her famous relationship with the singer Rauw Alejandro, public since the end of 2021.

This free and carefree image has filtered into his musical creation, both in his collaborations and in what he has advanced from Motomami; even the title seems to announce a new lighter and fresher stage. In the video announcing the release of the album, Rosalía could be seen with her body covered in red glitter, a jeweled bikini, a motorcycle helmet and stiletto heels. The sound of the song in the clip is more reminiscent of contemporary pop artists like Charli XCX, SOPHIE, Arca and Grimes than the flamenco she started from early in her career.

The debate on the evolution of Rosalía is not new. the jump between The Angels Y The bad want It has already raised voices that questioned whether moving from a heartfelt tribute to the flamenco tradition to an explosive mix of genres with a global reach was a sincere and organic transformation or was it hiding behind a commercial and premeditated strategy. The singer has a team led by women behind her, including her sister Pili, in charge of her outfits, her mother Pilar, administrator of the Motomami SL company that manages the economic part of her career, and her representative, Rebeca León, a herself a superstar within the Latin music industry. But Rosalía has always defined herself as a controlling and detailed artist who devises wide-ranging projects, to the point of studying sound engineering to have a greater command of the creative process. “I don’t do it for a mere strategic question, but taking into account my reason for making music: to share it. The priority is to be connected with each moment that I am living and that this is a communication channel, not a monologue, “he explained in an interview in Mondosonoro in 2018.

Despite his reservations, Carrión remains interested and hopeful and describes Rosalía’s project as daring and interesting. “I sense that she has discovered both the new popular genres that come from Latin America and what it means to be a global artist. He has begun to collaborate with the greatest exponents of reggaeton, the trap and other urban music and that has led to a miscegenation”. Sara García (Penny Jay), comedian and creator of Riot Comedy who has closely followed Rosalía, her music and her relationship with the figure of C. Tangana for years: “A Miley Cyrus has been marked and she is making songs that have nothing to do with the aesthetics, rhythms or soul of The bad want. It’s sending us signs that Motomami It’s not going to have anything to do with what we’ve seen before.” 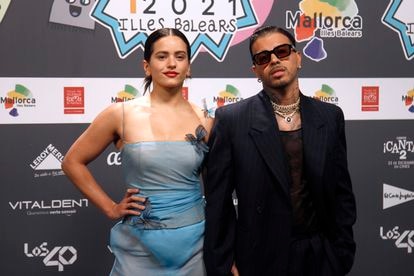 Rosalia and Rauw Alejandro posing as a couple before the press at the 40 Music Awards 2021 gala held at the Palma Velodrome in November 2021. Europa Press News (Europa Press via Getty Images)

Those signs were always there. The creator of The bad want She can be polyhedral and avoid all definition, but if something characterizes her, it is incorporating what she knows into her music. His first album was marked by his flamenco studies, and the second mixed that knowledge with personal ingredients such as the R&B music that he listened to in his teens and the sound of the motorcycles that his parents have always ridden. When success came he wrote Millionaire in Catalan, his native language, and now he composes about the volatility of fame and sexual enjoyment with his partner. He also talks about his own chameleon identity in the lyrics of Saoko: “A butterfly, I transform / makeup of drag queen, I transform / contradict myself, I transform / am toa the what’, I transform myself”.

It is likely that the reservations that may be had before the public image that he shows on social networks, the people he surrounds himself with or the lyrics of his new songs are nothing more than the manifestation of prejudices, a generational barrier and a certain machismo. We’re just not used to seeing a genius being playful, naive, sexual and exhibitionist and posing for photos blowing kisses for the camera alongside Kylie Jenner. Rosalía’s greatest talent is breaking our schemes.