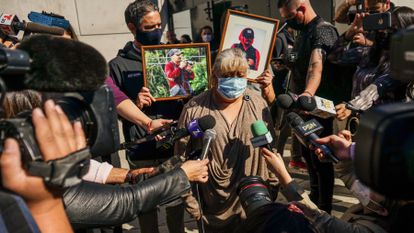 As if it were a country at war. This is how Mexico counts the murdered journalists, nine last year and another three when 2022 is just beginning. The unbearable rate of dead reporters calls again for street fighting and this Tuesday, a rally at eight in the afternoon the Ministry of the Interior, and others in different States, will remind the Government that freedom of information is seriously threatened in this country. José Luis Gamboa was stabbed on January 10 in Veracruz; Margarito Martínez was gunned down seven days later in Tijuana; This Sunday, also in Tijuana and also shot, Lourdes Maldonado was assassinated, who had the opportunity to tell the President of the Government in one of the mornings that she feared for her life. Silenced or murdered, this is the life of many journalists in Mexico, always with the same pattern: they are usually professionals whose information is uncomfortable for power or organized crime, who sometimes intermingle their interests. As if that were not enough, the last three years of Andrés Manuel López Obrador’s mandate, relations with the media have been tense.

The rallies this Tuesday “are an urgent call to the institutions and society to turn their eyes to these murders, to this reality that has been happening since 2000 in the States of the Republic, because it is usually the local journalists who face to their executioners: the State itself, powerful businessmen, the narco. For anything they kill you lately. And nothing happens, as if the life of a journalist was worth absolutely nothing”, says photojournalist Félix Márquez, from Veracruz, one of the wildest territories in this matter. Márquez is pleased that 23 states and 35 cities have joined the protest. “I think this denotes the fed up that there is already on this matter.”

Mexico City has traditionally been a haven for threatened reporters. “Perhaps because it is where the powers are and because everything has more repercussions, in such a way that the political cost is greater and there is more respect for journalists,” says Alejandro Meléndez, from Fotorreporteros MX, a group of photographers united in this cause. But everything changed when Rubén Espinosa was killed in the city, in the Narvarte neighborhood, along with other people who lived or worked in his building. It was in 2015 and there was a protest march that had not been repeated until now, although there have been occasional mobilizations in the States. Despite everything, the capital is still a peaceful territory compared to what is lived in Veracruz, for example, or in northern states. “In Tamaulipas there are zones of silence, where there is no information or only information about culture, shows, some social note. The media no longer report shootings, or corpses, not even on social networks, the silence is total,” says Meléndez. There is fear, a fear that is supported by statistics. Hundreds of attacks and in the end, the bullets.

That the journalistic profession is one of the most threatened is no coincidence. They represent freedom of expression and what they say does not interest many to be told. “You just have to look at the way they operate, there are almost always politicians behind these deaths, and the latest information from these reporters was uncomfortable, they revealed data or ways of acting that they do not want to be told,” says Mélendez. To all this we must add an impunity that is common to 95% of crimes in Mexico. Nothing ever happens. “In the case of Rubén Espinosa, we have seen how officials were removed from the Prosecutor’s Office when the investigation progressed to delay the process, starting from scratch. These are the classic delaying practices,” adds Meléndez, a member of Periodistas Unidos.

This Tuesday, the Interior will ask Alejandro Encinas, Undersecretary for Human Rights, that these crimes do not go unpunished, that they be investigated, that the right of citizens to be informed be taken into account. Stop the murders of journalists. “We expected and expect something different from this government. They must reinforce the protection mechanisms and the prosecutor’s offices have to take action on the matter. What is happening is terrible”, continues Meléndez, one of the organizers of the concentration.

The government’s relationship with the media has been rocky in these first three years of Morena’s six-year term. The president, Andrés Manuel López Obrador, is used to pointing out his first and last name to the media and journalists in his mornings, which has caused more than one upset. Some complained that they received threats after being criticized in morning conferences. The attacks on the press, however, did not stop. The president premiered his space to comment on the press on June 30, calling the reporters “corrupt, creeping and fundamentalist.” In the section lies of the week, the president compared the task of some information professionals with practices from the times of Hitler and Pinochet. He accused them of “low moral level”. Mexico, he said, is going through “one of the worst moments in journalism.” True, but for reporters, they are killed with complete impunity.

“The messages from the highest levels of power have been very unfortunate at times and that has repercussions on society. We see how people related to the Government repeat these messages. It goes beyond aggressions in the public space, it is that the life of journalists seems to be worth nothing. We can no longer tolerate it, the lives of our colleagues, our friends are at stake. They are unfortunate messages that generate unfavorable circumstances for the conditions in which we already work”, says Félix Márquez. “And on top of that, data is leaked to the press when the murders happen that do nothing more than criminalize and re-victimize the reporters.”

The protests this Tuesday will demand that governments criticize less and do more. Don’t put journalists on the target and protect their lives. 138 have died in the last three decades. As if the country was at war.