Ligue 1: Bordeaux finally wins, Rennes and Strasbourg move away from the podium, Montpellier brings down Monaco … What to remember from Sunday’s matches 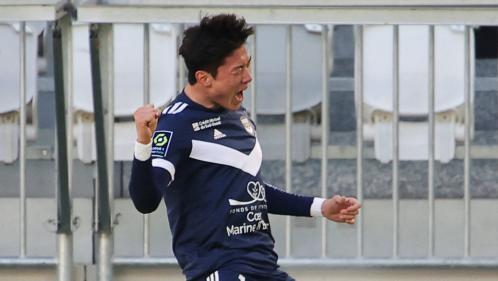 Six matches were on the program, Sunday, January 23, in the afternoon. And they offered a shower of goals. At 1 p.m., Nice won quite easily against Metz (2-0) and thus recovered the place of runner-up in the Championship, which the Aiglons had ceded to Marseille on Saturday evening. At the bottom of the table, the fight for maintenance is tighter than ever after the victories of Bordeaux and Clermont as well as the defeats of Metz, Lorient and Troyes. At 5 p.m., Montpellier won at the very end of the match against Monaco after a breathtaking encounter (3-2).

On the lawn in very poor condition at Saint-Symphorien, the Aiglons won 2-0 against a Metz team which only scored one shot during the match. Carried by a still very restless Amine Gouiri, author of a goal (his tenth this season) and an assist (his seventh), the players of Christophe Galtier go back to the second step of the podium with only two small points of victory. ahead of OM, who have a game late to play against Lyon.

Nice continues and now has five consecutive victories in the league. A dynamic that allows the people of Nice to make the hole in the race for the podium. After the defeats of Strasbourg and Rennes, Nice now has a seven-point lead over the Alsatians, fourth.

They were scared, but Vladimir Petkovic’s players held on until the end to beat Strasbourg (4-2). After three consecutive defeats, two of which without scoring a single goal, the Bordelais started their match in the best possible way with two quick goals from Hwang Ui-Jo and Alberth Elis (2-0, 21st). The Korean even scored twice with a strike at the entrance to the surface which ended his race in the top corner (3-0, 39th).

But the Bordeaux faults ended up resurfacing. Just before the break Strasbourg reduced the gap through Kévin Gameiro. The French striker doubled the bet at the start of the second period and put pressure on the Girondins (3-2, 57th). Majeed Waris even thought of equalizing late in the game but his goal was disallowed for offside. Hwang ended up worsening the score and offering himself a hat-trick to seal the Bordeaux victory with a new strike from distance (4-2, 90th). Waris came to conclude the festival of goals at the very end of the meeting (4-3, 90 + 7th).

A very tight struggle for maintenance

Bordeaux’s victory allows Petkovic’s men to breathe a little and get out of the red zone (17th, 20 points). Conversely, Lorient, once again in great difficulty defensively, lost against Nantes (4-2) and became relegated (19th, 17 points). The Merlus have not won a Championship match since September 22 against Nice and are in great difficulty. After its defeat against the Nice, Metz becomes for its part barrage with only two points ahead of the Lorient.

Between Lorient, 19th, and Clermont, 15th, only four points separate five teams. The Auvergnats won against Rennes after having suffered the opener (2-1). Troyes, defeated by two penalties from Thomas Mangani (2-1), is also in this risk zone (16th, 20 points).

At the top of the standings, the gaps are narrowing for the race for European places. Rennes fell to Clermont (2-1) on two goals from former Breton players: Lucas Da Cunha and Jordan Tell. Bruno Genesio’s players come to a halt after their big victory in Bordeaux last week (6-0). Strasbourg also lost points in the afternoon.

Results that allow Nantes, winner of Lorient (4-2), to come back to three points from fourth place in Strasbourg. Only four points separate the Alsatians at the foot of the podium, from Lyon, eleventh.

Montpellier snatch victory in a crazy match against Monaco

After 91 minutes of play, Stephy Mavididi liberated the Stade de la Mosson, allowing Montpellier to win ahead of Monaco (3-2). Before that, the Héraultais, who led 2-0 thanks to goals from the English striker and Elye Wahi, had seen the Monegasques come back to 2-2 through Wissam Ben Yedder and Vanderson. Philippe Clement’s men can harbor regrets as they struggled to convert their chances and their 17 shots. The Principality club suffered its first defeat since the arrival of the Belgian technician on January 3.

At the end of a superb match with breathtaking suspense, our Pailladins won a great victory which allowed the MHSC to gain 4 places in the standings!

In the standings, the Montpellier residents are doing a good job since they overtake their opponent of the day and recover sixth place. Small consolation prize for Wissam Ben Yedder: the French striker tops the scoring charts with 13 goals.