The main newspaper of the city of Wuhan, the Changjiang Ribao (Yangtze Diary), dedicates these days its pages to cover the annual legislative assembly, the central government’s fight against corruption or the conversation between President Xi Jinping and Belarusian Aleksandr Lukashenko. Nothing about the coronavirus when this Sunday marks the second anniversary of the closure of this city of eleven million people. The Wuhan lockdown lasted 76 days and proclaimed to the world that the then-unnamed disease was a much more serious problem than had been implied.

Then, and closed tight and tight, the city saw its health system collapse in those first weeks due to the avalanche of patients that no doctor knew very well how to treat. Citizen journalists such as Zhang Zhan, Chen Qiushi and Fan Bing showed scenes of chaos in overflowing hospitals before being arrested. Many sick people were made to return home, due to lack of beds; some died before reaching treatment in those early days of turmoil, before two hospitals were built in record time from scratch and more than a dozen centers were converted into field hospitals. In the empty streets, except for emergency workers, the only living things that circulated were dogs and cats.

Wuhan is today a covid-free city, like the vast majority of Chinese territory. It has not registered cases for months and daily life takes place without capacity limitations. But she remains reluctant to remember those months in which she captured the world’s attention, the first to experience a pandemic that continues to ravage the globe, and she silently bears its scars. Chen Qiushi has been very quietly released. Zhang Zhan is serving a four-year prison sentence for disorderly conduct; his family warns that he is carrying out a hunger strike in protest and that his poor health is putting his life in danger. No one has ever heard from the businessman Fan Bing. There are no official acts planned to mark the anniversary of that crisis that left more than 50,000 infected people in the city – some still have physical consequences – and 3,869 dead.

But there are small individual acts of commemoration. The Weibo account (the Chinese Twitter) of the ophthalmologist Li Wenliang, the doctor who was reprimanded for alerting his family and friends to the disease and who himself died of covid in those chaotic first weeks, has become a place of homage , where netizens send him messages as if he were alive, especially around marked anniversaries, and express their opinions. “Third year of the Coronavirus Era. I keep remembering you, I don’t know if you’ll be okay out there. The world is not back to normal yet. Like the day you left”, a user wrote this Saturday under the pseudonym “Doubting is Losing”.

Like the rest of China, this city on the banks of the Yangtze lives its normality with apprehension. “The environment has always been strict [en los últimos dos años], people wear masks, we have to present the green codes of health applications everywhere… but recently, it is even more so. Now it is also usually asked for a code that indicates the sites you have been to in the last 14 days. The nerves are especially noticeable at the airport, or at the train stations, more than in the center of Wuhan. A friend who has just returned from Beijing has been quarantined, ”says Jin, a marketing specialist, from there. 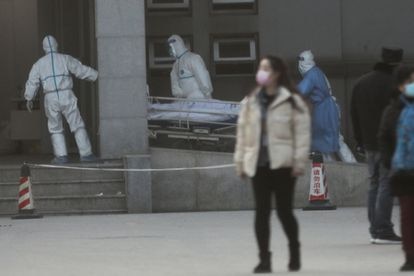 Medical staff transport a patient at the Jinyintan hospital in Wuhan in January 2020. DARLEY SHEN (REUTERS)

Despite the fact that, unlike the rest of the world, China maintains an inflexible zero covid policy, and the official number of infections in these two years is only around 105,000 people in a population of 1,411 million, the Government has not been able to prevent Small outbreaks of coronavirus have been emerging —quickly controlled— in different parts of the country. The omicron variant has already been detected in several cities, including Beijing. Last month, another city of thirteen million inhabitants, Xian, reported several dozen cases and ordered a confinement similar to the one experienced by Wuhan. Only now is it gradually beginning to lift, leaving behind numerous complaints about the supply of essential goods and three deaths of non-Covid patients who did not receive timely treatment due to inflexibly enforced rules.

That perceptible apprehension throughout the Asian giant is multiplied with just two weeks to go before the opening of the Winter Olympics in Beijing on February 4. The preparations are almost finished now; delegations have begun to arrive. The posters with the logo of the five rings flood the capital and the Chinese media have already begun to bombard them with information about the event. To prevent the covid from overshadowing the macro sports event, which will take place in a completely sealed bubble, China has shielded itself.

Most of the few international passenger flights that have operated so far have been suspended. The contagion with the omicron variant of a woman in Beijing who was not a contact of any other case has led the authorities to conjecture that the source of infection could be a package received from Canada and that it also passed through the United States and Hong Kong. Mail from abroad has come under suspicion: state television CCTV has recommended its followers on social networks to reduce “purchases of products from abroad and the receipt of international mail”.

Four infections in the same cold chain in a district of the capital has led the head of the municipal government in Beijing, Cai Qi, to give orders to tighten surveillance on this type of logistics chain. Workers in this sector will have to undergo a coronavirus PCR test every three days, instead of the seven hitherto mandatory. Your contacts must report to one every fortnight. 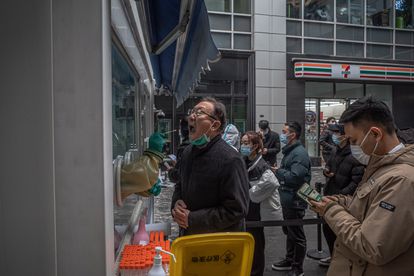 A man undergoes a covid test while other people wait in a queue, this Saturday in Beijing. ROMAN PILIPEY (EFE)

The dozen cases detected so far in the outbreak in the capital have also led to ordering the closure of Beijing schools, which must teach their classes remotely. All of your students are required to take a PCR test in a staggered manner.

The proximity of the Lunar New Year festivities, which this year falls on February 1, also contributes to the nervousness of the authorities. Every year, hundreds of millions of people travel to join their families to celebrate the arrival of the lunar spring, something that can generate new outbreaks.

The official recommendation is to avoid travel as much as possible. Many cities, including Beijing or Sanya, the tourist capital of the tropical island of Hainan, these days require travelers arriving from other parts of the country to present a negative PCR test carried out in the previous 48 hours. The Chinese capital also requires a second test 72 hours after arrival. And it prohibits the entry of those who come from localities where positive cases have been detected.

The harsh measures are beginning to generate fatigue among some, especially those who, following official recommendations, have avoided traveling outside their places of residence in the last two years. “I have already bought the train ticket and I am going to my town in Anhui province next Tuesday,” says Xiao Lan, 45, who works in a small shop in Beijing, with shining eyes. “I already know that the recommendation is not to travel, but in my province there are no cases of coronavirus. Right now there is no risk like in Shaanxi or Henan (where there are active outbreaks), and I haven’t seen my family for two years. It’s time for me to go.”

COVID: Is a second booster of the vaccine recommended? This says the WHO

“I am ashamed…” Christophe Urios raises his voice at UBB