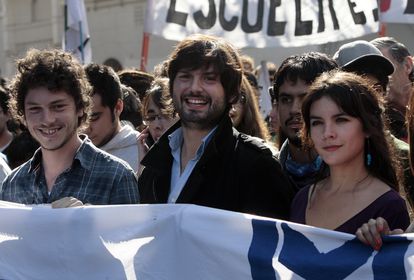 Gabriel Boric and his fellow travelers, as he himself calls them, have had it all at once. Along with Giorgio Jackson and Camila Vallejo, they led the student protests of 2011 and 2012, demanding free and quality education. Shortly after, in 2014, with less than 30 years, the three came to Congress and formed the student bench in the Chamber of Deputies, together with Karol Cariola, another important communist leader. After two periods in Parliament, Jackson and Vallejo did not plan to run again: they wanted to continue studying and doing politics from other spaces. He even plans to go to the UK. But at the beginning of 2021, what was above all a testimonial bet began to take shape: Boric’s candidacy for the presidency, the only one who was already 35 years old, an age at which he could run, according to Chilean law. His party, Social Convergence, had trouble even collecting the 34,000 signatures needed to get on the ballot. And the rest is history.

After a resounding victory in December, the president-elect has installed Jackson (34 years old, who will be in charge of relations with Parliament), Vallejo (33 years old, the spokeswoman) and Izkia Siches in the Interior as fundamental pieces of his Government , a 35-year-old doctor who was also a leader of the students of the Faculty of Medicine of the University of Chile in the protests 10 years ago. A photograph circulating on social networks shows Boric and Siches very young, smiling, in the middle of a march, he with a flag in his hand, without even imagining what would happen after a decade. 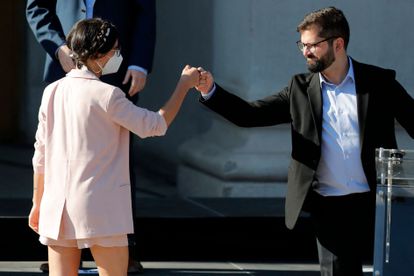 Boric and Vallejo greet each other this Friday in Santiago at the Cabinet appointment ceremony. JAVIER TORRES (AFP)

Everything has come to them at once and some facts reflect it. Boric, for example, has not graduated as a lawyer from the University of Chile, which raised strong criticism during the campaign. Before, in 2015, when Boric and Jackson proposed a reduction in the parliamentary diet, the then Christian Democrat senator Ignacio Walker confronted them: “They go from the allowance to the parliamentary salary.” Because, after being student leaders and winning the elections to enter Parliament, they have had no other jobs than politics. While she was a deputy, Vallejo received strong criticism from time to time on social networks for the hoax of her alleged Audi brand car, because Chilean society would not have allowed a young leftist politician to do so. The deputy had to deny it on many occasions and even took it with humor. As Boric’s family lives in Punta Arenas, in the extreme south of the country, he came to the capital as a university student and, later, as a deputy, he lives with his partner Irina Karamanos in an apartment in a central sector of the capital, in the that you must move before next March 11 for security reasons. Unlike previous Chilean presidents – with a stable home, children, wife – Boric’s advisers will have to find him a residence according to his position.

“It has been a very fast process”, recalled a few days ago the lawyer Constanza Schonhaut, an important leader of Boric’s Broad Front, who is currently working as a conventional to draft a new Constitution. “It’s a bit dizzying to see it backwards. How everything happened so quickly and how we were a generation that built very quickly, very conscientiously: with a lot of responsibility for the path we wanted to trace. And we are tracing that path. With hope and a historical weight on our shoulders”, described Schonhaut, a member of Boric’s party, Social Convergence, and part of the narrow circle of the president-elect. 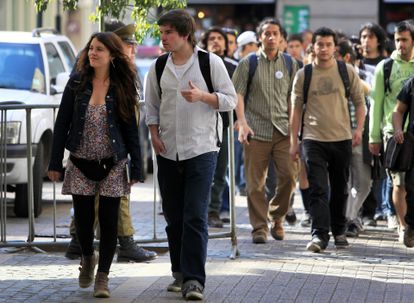 Giorgio Jackson, Camila Vallejo and other student leaders arrive at a meeting at the Ministry of Education, on September 29, 2011. Felipe Trueba (EFE)

Schonhaut spoke of an “orphan” generation, which did not feel represented by politicians and their way of exercising the public, which was “self-forming and co-forming.” “We were building from the mistake and the success,” commented the lawyer, who refers to another issue that marks this generation, the way of questioning the hierarchy. “Gabriel is our president, but we understand him as an expression of a collective process. We have a deep admiration and respect for him, for the role he is going to play and has played throughout this process, but he is our partner, ”said the Broad Front conventional in the podcast the daily coffee.

Boric together with Siches, Jackson and Vallejo will make up the political committee of La Moneda. They will all have an office in the Government Palace and will make the most relevant decisions in the country, in a group that will include the next Minister of Finance, the economist Mario Marcel, and the Minister of Women, Antonia Orellana. They belong to different political forces. While Boric leads the Social Convergence, the same formation as Orellana, Jackson belongs to the Democratic Revolution, although both are part of the Broad Front. Vallejo is a member of the Communist Party, which even had an alternative presidential candidate to Boric for the primaries of the Approve Dignity bloc. In 2017, the government spokesperson said in an interview with EL PAÍS that the Communist Party and the Broad Front had “many programmatic coincidences and strategic views of the future.” Marcel, the 62-year-old veteran of the political team, is strongly linked to the Socialist Party, although he is not a formal member.

“Why did I accept to be Minister of Finance of the future Government of President Boric? Just a few days ago I said that economists should be able to get out of our comfort zone, contribute to expanding the limits of what is possible and be non-conformist. For this reason”, assured Marcel, a social democrat, a symbol of fiscal responsibility, after knowing his designation in one of the most important positions of the future Government. The youth thing has been an issue that Boric and his fellow travelers have had to refer to on many occasions. In the campaign, the ruling candidate, Sebastián Sichel, criticized him for the lack of vital experiences, such as fatherhood (neither Boric nor Jackson have children, unlike Siches and Vallejo, who each have a daughter). “Being president is more than being a university leader, a lot of experience is required. It is required to have led something other than politics, not to have been only a deputy in life, to have vital experiences; I am a father”, assured the ex-minister of Piñera in campaign. Boric himself, before running for La Moneda, had referred to the matter of experience: “I lack experience and knowledge,” he assured in December 2020 on television, when the possibility of being on the presidential ballot seemed distant. Boric and his people have taken charge of the theme and have taken as an anthem an iconic song by the Argentine León Gieco, You will leave Charly. “They say the youth do not have enough experience to govern. Luckily, I never have it. stealing experience. Luckily, I never have it. Experience of lying”, says the theme of the famous singer-songwriter, who has even had meetings with the now president.

“It is a generation that has experienced a growing incorporation into the institutional framework that has to take charge of a historical crossroads, with Chile with a social and political fracture that we have not seen for a long time,” sociologist Carlos Ruiz has described, who was one of the theoretical mentors of the Broad Front and has seen its maturation in the last decade. “This generation –and in this Gabriel has always been very sensitive– is very open to the new Chilean social and cultural geography. To the demands that it poses and to the need that the old devised to update themselves in the face of the new social panorama. They can worship Salvador Allende, but they realize that there is a balance sheet of that gigantic 20th century left that is still absolutely pending”, reflected Ruiz.

They will start the Government with immense expectations – a high risk, according to many – and with firm attempts to remedy what this generation of leftist politicians was criticized for a lot in the past: a certain arrogance and little intergenerational view. Boric, in the Cabinet announced on Friday, has shown signs that the view is changing. He has included not only people his own age –although it is they who he has installed in his first ring of power–, but also many professionals in their 40s and 50s, and even familiar faces from the center-left, such as Senator Carlos Montes, 75. When a photograph went viral on social networks comparing the first Democracy Cabinet in 1990 with the one that will debut in March –with obvious differences in the presence of women and diversity–, it was Boric himself who He stopped criticism and ridicule. “I have seen the comparison of Patricio Aylwin’s cabinets with ours and it is true that it is striking due to the presence of women, young people and colors that shows how society has changed. But let’s not forget that the pre-Alwyin photo was with the military. That is his greatness.”