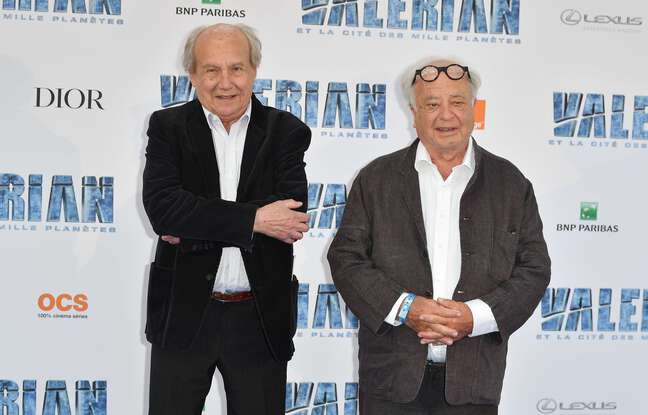 He was the co-creator of the famous SF comic series Valérian et Laureline. Jean-Claude Mézières, one of the great figures of French comics, died on the night of Saturday to Sunday. “It is with immense sadness that we learn of the death of Jean-Claude Mézières, who disappeared on the night of January 23, 2022 at the age of 83”, announced his publisher, Dargaud, in a press release.

Influence of many authors around the world, he had a predilection for science fiction and also worked in illustration, advertising, photography, cinema or television.

“The name of Mézières is first associated with the characters of Valérian and Laureline, of which he was the co-creator and which he drew for more than fifty years alongside his scriptwriter and lifelong friend, Pierre Christin”, defined the ‘editor.

“His high standards, his energy, his strong personality, his benevolence, his simplicity, his joie de vivre, his joyful curiosity, show him to be a precious and deeply endearing being,” he commented.

Born on September 23, 1938 in Paris, and raised in Saint-Mandé, Jean-Claude Mézières had met Pierre Christin during a bombing raid in 1944, during which the families of the two children had taken refuge in the same cave. .

This fan of drawing and Tintin, who tried his hand at comics from the age of 15, studied at the School of Applied Arts in Industry and Commerce (“Arts’a”), specializing in “fabrics and wallpapers”. . It was first published in 1955, in the weekly Cœurs vaillants.

After his military service, where he was sent to Algeria, he was hired as a model maker then illustrator at Hachette, then assistant photographer in an advertising studio. He leaves for the United States, where he will practice as a cowboy, and there meets his wife, Linda, a student of Pierre Christin who teaches in Salt Lake City (Utah, west).

A series translated into twenty languages

It was in 1967 that Pierre Christin and Jean-Claude Mézières published in Pilote the first episode of the adventures of the “spatiotemporal agents of Galaxity” Valérian and Laureline, at a time when science fiction interested few comic book authors.

The success will lead to “25 albums”, translated “in twenty languages”, recalls Dargaud, who sees in it one of the influences of the film saga “Star Wars”.

The series gave rise to the film Valerian and the City of a Thousand Planets by Luc Besson in 2017, the commercial failure of which led the filmmaker’s production company to the brink of bankruptcy.

The flying taxis of the “Fifth Element”

“Jean-Claude Mézières also worked for the cinema, designing sets and costumes for A Rebel God, a film by Peter Fleischmann, and for The Fifth Element by Luc Besson, to which he gave the idea of ​​flying taxis”, continued Dargaud.

On the occasion of Lille 2004 European Capital of Culture, he also adorned rue Faidherbe, one of the most beautiful arteries in the city centre, with a spatial decor.

His last publication, in October, L’Art de Mézières, was a panorama of his graphic creativity, which “made it possible to highlight his work of great richness” according to the publisher. Jean-Claude Mézières had a daughter and a grandson.