The Secretary of Energy, Rocío Nahle, defended this Saturday that the new Dos Bocas refinery is being built “in record time” in the face of media reports about delays in the work and a cost overrun greater than 50 percent.

“Today again there are speculative, alarmist and biased notes in some national media”

“Dos Bocas is being built in record time. Opinions in the world are very positive. Today there are again speculative, alarmist and tendentious notes in some national media,” Nahle said on his social networks.

The secretary’s statements come after a Bloomberg report that estimates that the refinery will cost 12.5 billion dollars and will not operate in 2022 as the Government intends.

President Andrés Manuel López Obrador (AMLO) promised in May 2019 that the refinery, one of his emblematic infrastructure works, would cost eight billion dollars despite a Moody’s report that then calculated the cost between 10 and 12 billion dollars. of dollars. 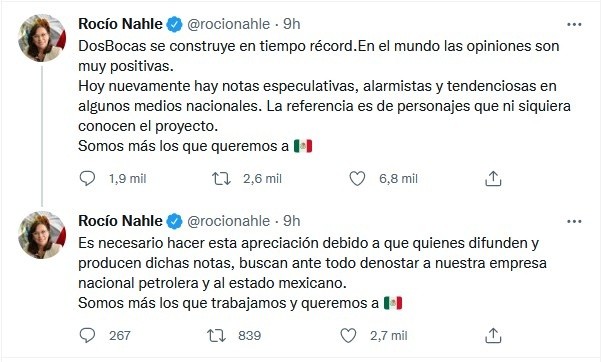 Nahle objected this Saturday that the media make “reference” to “characters who do not even know the project.”

“It is necessary to make this assessment because those who disseminate and produce these notes, seek above all to revile our national oil company and the Mexican State,” said the official.

The refinery, which would process 340,000 barrels per day, is one of AMLO’s bets to “rescue” Petróleos Mexicanos (Pemex), the state company.

AMLO announced last month that Pemex would stop exporting oil in 2023 to process two million barrels per day for internal consumption with the construction of Dos Bocas, the modernization of the six existing refineries and the recently acquired Deer Park in Houston, Texas.

The “cryptoqueen” who scammed and is now the most wanted