Eighteen years have passed since 37-year-old Brazilian photojournalist Tuca Vieira boarded a helicopter with his camera with the mission of photographing São Paulo from the air for a major report. During that flight he took a photograph that is a world icon of inequality, one of the most famous portraits of the abyss between the rich and the poor in the world. The swimming pools on the spiraling balconies of the skyscraper and the neat tennis courts contrast brutally with the shacks of a favela in a composition that seems to be the result of Photoshop. But no, it represents the gap between those who have everything (and continue to accumulate) and the dispossessed. As valid in the Brazil of 2004 as in the present.

Reproduced by hundreds of publications and websites, it has traveled the world. Just these days, when 100 millionaires have taken advantage of the Davos forum to announce that they want to pay more taxes, 18 years have passed since the photo of inequality was on the front page of Folha de S. Paulo. Inequality is also making headlines as the wealth of the world’s 10 wealthiest men has doubled during the pandemic, according to Oxfam.

But, back to the image. “We were doing a report for the 450th anniversary of São Paulo, which was going to go in a booklet,” the photographer Vieira told the phone this Tuesday. Among the pictures of the most glorious moments of the city, he wanted to make it as a counterpoint because “it is a dose of reality”. The leadership liked it so much that it went to the front page and inside pages. Part of the credit for the image that marked her career went to a colleague, Marlene Bergamo. She suggested that during the overflight he take a look at the border between the Paraisópolis favela and the Penthouse tower in the Morumbí neighborhood, a point of the metropolis that he did not know.

Photography has two readings, the Brazilian and the foreign, emphasizes the author. At home it had repercussions, of course, but “it only reached that dimension that it has today when going abroad”. It took on a new life to become a phenomenon, a global icon, when it was published in Europe. Last year, Vieira repeated the photo from the same perspective. Little has changed. The divide appears sharper. The most visible change is the trees that block the view of the favela. It is the same reality, one that is usually counted with figures.

In Brazil there is a real obsession to quantify everything. That is why the torrent of figures that portray socioeconomic inequality in its infinite aspects is constant. In the avalanche of recent issues, two stand out like punches to the pit of the stomach. 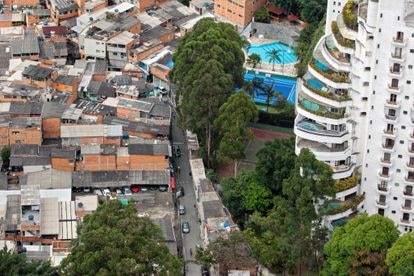 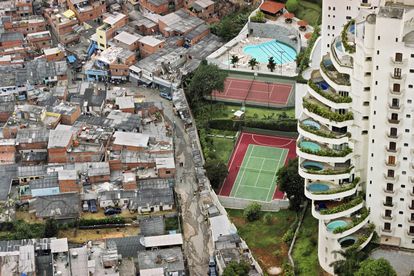 The original photograph, taken in São Paulo in 2004. The second photograph taken in the same place 18 years later in 2021. Tuca Vieira

One referring to São Paulo: the residents of the worst neighborhood live 23 years less than those of the best. The reality of Morocco and Denmark in the same city, the richest in Latin America. The residents of Cidade Tiradentes die on average at 58.3 years; those from Alto de Pinheiros, at 80.9 years, according to the inequality map 2021 prepared by the NGO Rede Nossa São Paulo. They are separated by a socioeconomic abyss and 50 kilometers, a distance that can be traveled by public transport. Of course, it is 2.5 hours and four transfers. Daily routes for thousands of babysitters or porters.

The second fact, about Brazil. White men in the richest 1% have more income than all black and mestizo women. There are some 700,000 men who account for 15% of the income while women (the largest demographic group in Brazil) add up to 14.3%, according to a recent study of the University of São Paulo.

The country would become a Belindia, the term devised in the seventies by the economist Edmar Lisboa Macha. An entity resulting from the combination of Belgium and India. A country with the laws and taxes of a small, rich state, and the social reality of a poor giant. Brazil is much richer than it was half a century ago, but that wealth is still in the hands of a minority.

Since Rede Nossa São Paulo made the first inequality map a decade ago, little has changed. The general coordinator of the NGO, Jorge Abrahõ, explains that “there are small improvements and setbacks, but in general it is stagnant.” Racalca that “what is really striking is that Brazil manages to generate wealth, but fails to distribute it.”

The socioeconomic gap diminished somewhat during the first years of this century with the governments of the Workers’ Party of Luiz Inácio ‘Lula’ da Silva, but Brazil remains firmly among the most unjust countries in the world. Also in those years the distribution of wealth was disproportionate. The problem lies in the power structures, in who makes the laws… “It is a structural part of how Brazil is organized. Governments, even well-intentioned ones, cannot mess with those structures that perpetuate inequality,” according to Abrahõ.

The specialist maintains that Sao Paulo is a reflection of Brazil. With its nuances, as always in such a diverse and vast country. It is twice the size of the European Union with a population of 210 million people descended from slaves, white immigrants and indigenous people.

The obvious contrasts to those who circulate in São Paulo (a city of 12 million inhabitants) are quantified on the map of inequality. Among the sea of ​​data measured with the inequality meter, some are really shocking. In teenage pregnancies, the difference between the best neighborhood and the worst is 60 times; school dropout of 70; the wait for a basic medical consultation 12 times, and mortality from covid, double. In a third of the districts — suburban neighborhoods — there is not a single train, metro or tram within a kilometer radius, only the bus arrives.

The photographer emphasizes that his work “has a symbolic power, which says a lot about our collective memory, beyond the documentary power.” Because the reality is that the Penthouse tower fell into decline, it is considered tacky. And Paraisópolis, which grew to touch the feet of the skyscraper, is, with its many shortcomings, one of the richest and most dynamic Brazilian favelas.

Anyone in Brazil knows that the truly rich — the 1% — don’t live in buildings like the Penthouse. They take refuge in their bubbles, urbanizations of luxurious chalets, lawns and little traveled streets surrounded by walls and security controls. That’s where Brazil lives, which, as it has not been able to travel abroad, has given an extraordinary season to the local luxury sector. Porsche sales are at record levels and the waiting list to buy a helicopter is 20 months.

But anyone who walks the street perceives how homeless people have increased in São Paulo with the pandemic. Families with children have joined the tens of thousands of disinherited or drug addicts. According to the last official count, before the coronavirus, there were 24,000 people, more than the population of some districts. Some NGOs estimate that they are now triple, 66,000. For Vieira, that is the image that no one should get used to.