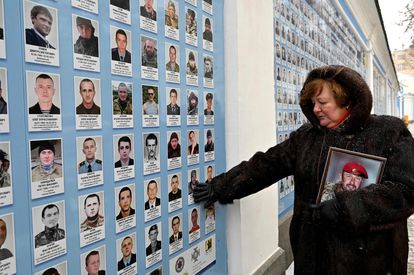 The mother of a Ukrainian soldier remembered her son on Friday at a memorial to the conflict in Kiev. SERGEI SUPINSKY (AFP)

The European Union has secretly negotiated an unprecedented battery of sanctions with which to hit Russia if its president, Vladimir Putin, decides to invade Ukraine. The reprisals, woven with absolute secrecy, would be adopted almost immediately and in full agreement with Washington and London in the event of the attack. The punishment, according to community sources, would range from the suspension of any type of economic cooperation with Moscow to a drastic cut in trade relations, including the import of Russian gas and oil. The expected blow is of such magnitude that, according to the same sources, Brussels has also prepared contingency plans to alleviate the damage that the European economy would inevitably also suffer.

The plan will be discussed on Monday during a closed-door lunch of the EU foreign ministers, meeting in Brussels under the chairmanship of Josep Borrell, the EU’s high representative for foreign policy. The appointment will be previously attended by videoconference by Antony Blinken, US Secretary of State. “Blinken’s participation shows the unity of the international community in the face of Russia’s attitude and the close coordination between the allies,” says a source European diplomat.

The objective of Monday’s meeting “is not to adopt any specific sanctions, but to establish the scenarios and the reactions that each one of them would cause,” says another European diplomat. Community sources rule out making possible reprisals public. But they assure that a new attack against Ukraine “would provoke a response equal to the greatest security challenge facing Europe since the end of the Cold War.”

Among the measures being considered are the complete closure of European capital markets for Russian companies and financial institutions and restrictions on the export of essential materials or services for key sectors of the Russian economy, such as energy, mining or heavy industry.

And ultimately, the severing of financial ties with the Russian economy, which would leave Moscow dangerously isolated from the world financial market. The US even seemed willing to cut off Russia’s access to the SWIFT financial transaction system (the electronic messaging system through which the vast majority of bank transfers are processed), but the necessary consensus for such a measure is not yet apparent. drastic, so far only applied to Iran.

Clara Portela, professor of Political Science at the University of Valencia and specialized in international sanctions, considers that “massive damage would be caused by the inclusion of Russian banks on a US list that would prohibit any transaction in dollars with them.” Portela believes that “the EU’s contribution could consist of doing the same with the euro, that is, prohibiting those same banks from carrying out transactions denominated in the European currency”. The European veto “would remove the option for Russian entities to circumvent US sanctions.”

It is not even ruled out to put a stop to the purchase of Russian oil and gas, which now covers 26% and 40% respectively of European imports of these hydrocarbons. The EU’s energy dependency made a renunciation of imports from Russia unthinkable until recently. But the development of renewable sources and the possibility of importing liquefied gas from other countries has recently changed the scenario.

Even so, in Brussels it is recognized that the commercial rupture with Moscow would force the adoption of contingency measures. But the sources consulted assure that the EU has the capacity to resist the challenge, even in the energy field.

The crisis in Ukraine has already caused a drastic change. Russian gas imports have fallen from 3.25 billion cubic meters at the beginning of 2021 to 1.7 billion in the first week of this year, according to the collected data by the Bruegel study center. Of the four gas pipelines from Russia, only the Nord Stream, which connects directly to Germany via the Baltic, is operating at the same level as last year. Those passing through Ukraine and Poland have drastically reduced the flow. The one that arrives through Turkey has suffered numerous ups and downs. And the second Baltic gas pipeline, Nord Stream 2, has not yet started pumping gas (due to lack of European authorization) and the Ukrainian crisis could make it permanently unusable.

The import of liquefied gas from other countries by ship has gone, instead, from 1,400 million cubic meters in the first week of January last year to 3,380 million every seven days of this month, according to data from Bruegel. Gas imports from Norway have touched their all-time highs several times in recent weeks. And those of Algeria have suffered, due to the crisis with Morocco, but they are well above their historical lows.

The energy shock, if it were to consummate, would seriously deteriorate the business relationship between the EU and Russia. The damage, though reciprocal, would have more devastating consequences for the Russian economy. The EU is Russia’s largest trading partner and the destination of 38% of its exports. The Russian market, on the other hand, only absorbs 4.1% of European exports, according to data from the European Commission. The EU, however, is also playing its presence in Russia, where it is the largest international investor and accumulates an investment of more than 300,000 million euros.

“This trade relationship is important to us, but it is much more important to Russia,” Commission President Ursula von der Leyen warned Thursday at the Davos forum, held virtually. “We hope that an attack does not take place, but if it does take place, we are prepared,” added the European leader.

Sources from the European Commission, the Council and the main European capitals agree that the battery of sanctions is ready to be activated as soon as necessary, which is not an obstacle to keeping the negotiation path open with Moscow. “Our plan is prepared, but the ideal would be not to apply it,” says a diplomatic source. “Let’s cross our fingers,” adds another.

The EU already adopted trade sanctions in 2014, in response to the first Russian aggression against Ukraine, which resulted in the destabilization of the Ukrainian provinces of Donbas and the Russian annexation of Crimea. The European punishment, still in force, limited the access of a handful of Russian banks to European capital markets, prohibited the purchase in Europe of bonds issued by three Russian energy companies and stopped the export of weapons and certain energy prospecting material.

The Russian economy has resisted those sanctions for seven years. And analysts acknowledge that Putin has strengths in his favor to resist a new attack. Russia barely has public debt (20%), points out the European Policy Center. And it has a powerful sovereign fund, fueled by hydrocarbon exports, which in December 2021 amassed 185,000 million dollars (163,000 million euros).

But the country’s economy also has vulnerable points. Some conjunctural, such as the inflation (8%), which doubles the target of the Bank of Russia and maintains interest rates at 8.5%. But other flanks of risk are more structural, such as the dependence on gas and oil sales, which cover almost a third of the income of the national budget.

The EU is convinced that much damage could be done to the fragile economy of a country shaken by internal tensions that have led the Kremlin to tighten the repression and persecution of the opposition in recent months. But Brussels, like Moscow, keeps its cards hidden so that it is the adversary who makes his own calculations about the consequences of his actions. The only public message repeated by all Western sources is that an armed attack on Ukraine would provoke a devastating Western response to the Russian economy. “Enormous consequences and very high costs”, threaten European capitals again and again.