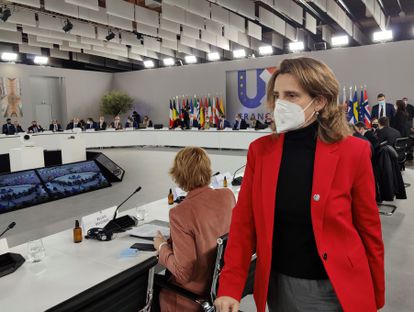 The third vice-president of the Government and minister for the Ecological Transition, Teresa Ribera, on Friday in Amiens.Javier Albisu (EFE)

Spain wants to form an environmental entente to prevent Brussels from classifying nuclear energy and gas as green, a pressure group similar to the block with which it has already stood up to the European Commission to demand that it take far-reaching measures against the clawing of prices of electricity. The Third Vice President of the Government and Minister of Ecological Transition, Teresa Ribera, has sent a harsh letter to the Community Executive, signed together with her counterparts from Austria, Denmark and Luxembourg, in which they express their “deep concern” about the recent proposal of Brussels on the so-called green taxonomy, a classification drawn up by the Commission that distinguishes what is a green bond and what is not, and whose objective is to direct community finances towards the ecological transition undertaken by the EU.

The four governments regret in the letter, signed last Thursday, that a regulation that has to serve as a global inspiration to face environmental challenges runs the risk of losing its “usefulness and credibility”. “The Commission proposal puts the energy transition in the EU and globally at risk and endangers the Taxonomy by classifying gas and nuclear energy as sustainable, giving them de facto the same treatment as unquestionable green technologies such as wind energy. and the solar”, affirms the text. “We consider that the new project is problematic both from a political and technical point of view,” he adds.

The letter has been made public just as the Ministers of the Environment and Energy of the Twenty-seven meet from Thursday to this Saturday in Amiens (France). From there, Vice President Ribera has stressed that the Commission’s proposal is “controversial” and can “distort and generate confusion” regarding the recommendations that Brussels has been making on sustainable finance. Her Austrian counterpart, Leonore Gewessler, has gone further by assuring that she plans to take “judicial measures” if the Commission continues down this path.

The Community Executive advanced in April 2021 the bulk of the taxonomy measures, with the intention of creating “a common language that investors can use when investing in projects and economic activities that have a substantial positive impact on the climate and the environment ”, as he assured then. But he left the thorny debate on gas and nuclear for later, pending technical reports. After months of waiting, in which an intense debate arose between the countries in favor of including nuclear energy in the taxonomy (led by France, which obtains more than 70% of its electricity from nuclear power plants) and those who advocated incorporating gas (with Germany in the lead), the Commission presented a draft last New Year’s Eve.

The document raised a cloud of dust when touching both technologies with the green wand. The catalogue, Ribera has criticized from Amiens, should only include investments “that enable rapid decarbonization without environmental risks”. At the meeting of ministers, however, the matter was not discussed, as detailed by Barbara Pompili, French Minister for Ecological Transition, in an appearance at the end of the meeting. “The challenges of the green pact”, he justified, “are important and cannot be delayed by the taxonomy”.

The Commission’s proposal is not yet firm, but the deadlines for presenting the final text are running out. Meanwhile, it continues adding voices against. On Friday, the mandatory consultation period ended, and the group of experts that is to advise the Community Executive had planned to present a devastating report against it, according to a draft cited by Reuters. In that document, the experts affirm that the current initiative would distribute green labels to investments that do not contribute significantly to the fight against climate change, and ask the Commission to discard part of its proposals.

The current Brussels initiative considers nuclear power plants whose construction permit is issued before 2045 and those of gas in operation that emit less than 100 grams of carbon dioxide (CO₂) per kilowatt hour (KWh) or those of new construction, to be sustainable. whose permit has been issued before 2030, that emit less than 270 grams of CO₂ per kWh, provided that this energy need cannot be covered with renewable sources and the installation replaces another pollutant.

Instead, the consultants consulted believe that only gas-fired plants that emit 100g CO₂ per kWh or less should be considered climate-friendly. “This is the science-based approach,” the document says, quoted by Reuters. As for nuclear energy, the Commission’s proposals “should not go ahead” because they do not guarantee that the plants do not harm the environment, they explain, citing concerns about the disposal of nuclear waste.

“We have the comments, we have received them,” replied Eric Mamer, spokesman for the Commission, in an appearance on Friday. “We will look at them before we put the proposal on the table.” Mamer has declined to comment on whether Brussels will vary its proposal in any way.

After the consultation period, the Commission must now present its final proposal by means of a delegated act. This type of non-legislative decision, of a technical nature, can go ahead even without the unanimity of the Member States: it can only be vetoed with the rejection of a qualified majority in the Council (55% of countries grouping 65% of the population ) or the European Parliament. The block led by Spain in the letter, however, would remain far away for the time being: it only represents around 14% of the countries and the population.

Meanwhile, the MEPs have also made their voices heard through another letter addressed this week to the Commission in which they demand that citizens and the European Parliament be allowed to give their opinion on the controversial proposal. The letter, quoted by Reuters, criticizes that it was launched on New Year’s Eve, and calls for a “more transparent” procedure.