Presidential 2022: with the rallying of Gilbert Collard, Eric Zemmour continues to poach within the RN (and hopes to attract Marion Maréchal) 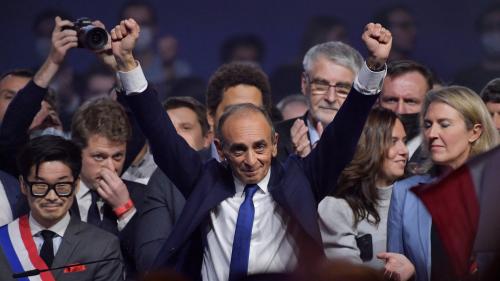 Support from the right and from the National Rally is accumulating for Eric Zemmour. After the former vice-president of the Republicans Guillaume Peltier or even more recently the MEP RN Jérôme Rivière, it is Gilbert Collard’s turn to join the ranks of Reconquête!. The RN MEP makes his first appearance alongside the far-right candidate on Saturday January 22 in Cannes, on the occasion of a campaign meeting for the former polemicist at which he is to speak.

>> Presidential 2022: advisers, financiers, supporters… Who are the members of the Zemmour galaxy?

A major political rallying which “will lead to others coming from the RN” according to those close to Eric Zemmour. The names of Senator Stéphane Ravier, MEP Nicolas Bay or even Marion Maréchal, Marine Le Pen’s niece, are circulating insistently to now join the candidate’s campaign. But these possible new defections do not worry Marine Le Pen and her main supporters. According to the latter, Eric Zemmour’s strategy, which consists of announcing a new rally almost every day, would above all allow him to make people forget his legal news, his hectic movements and his stagnation in the polls.

“I have nothing against the National Rally or against Marine Le Pen, no recrimination, no vindictive (…) But I think that a day will come when Marine Le Pen will do like me, and join Eric Zemmour”. The rallying of Gilbert Collard in favor of the former columnist is without doubt the most important war prize made since the start of his presidential campaign. The arrival of the RN MEP in his team allows Eric Zemmour to strengthen his displayed strategy of “gathering the rights”. Former renowned lawyer and member of the National Rally for ten years, Gilbert Collard was considered close to the leader of the RN.

Thank you my friend, @GilbertCollard. You are welcome to the Reconquest! pic.twitter.com/7Uscw1q6Ql

After former elected officials like Agnès Marion, Thibaut Monnier, Antoine Mellies or even more recently Jérôme Rivière, boss of RN MEPs, the arrival of Gilbert Collard in the nets of zemmourism is a tactical double blow. Not content with at least symbolically weakening the National Rally, the former editorialist is strengthening his network of political supporters in the south of France where Gilbert Collard, as a former RN deputy from Gard, is very established.

“I join him for the ideas, for the debate, for the taste of freedom and I remain a free man (…) Eric Zemmour has the merit of lifting the lid of political correctness, he broke the mafia wall of silence “, reacted Gilbert Collard on France Bleu Gard Lozere, who had already displayed his closeness to Eric Zemmour during a signing session for the latter’s book last October.

With the fanfare departure of Gilbert Collard, Marine Le Pen lost one of her most loyal lieutenants. But while other rallies to Eric Zemmour from the RN are expected by April, the tenors of the party display their serenity. “It’s been three years since I expected Gilbert Collard to leave the RN. He must resign from his mandate as an MEP which he received from the voters of the RN”, reacted in particular on Saturday on franceinfo Louis Alliot , vice-president of the RN and mayor of Perpignan.

For Marine Le Pen, who has still not spoken directly on the Collard case, there is no danger yet. “I have an old experience of presidential campaigns (…) But in politics too, we can act with righteousness. The technique of salami consisting of announcing a rally every day, I know it by heart”, all the same launched the candidate on Friday at the microphone of BFMTV, after the defection of the former lawyer.

After the sovereignist Philippe De Villers, the Sarkozyist Patrick Buisson or the co-founder of Génération identitaire, Damien Rieu, “other rallies will follow”, according to relatives of the far-right candidate. The most anticipated – or in any case hoped for – being that of a certain Marion Maréchal. Very discreet since the start of this presidential campaign, the niece of Marine Le Pen has never hidden her friendship and her political closeness with Eric Zemmour. If for the moment nothing is recorded, his rallying to the former polemicist could do very political harm to the candidate of the RN. In the entourage close to Eric Zemmour, we are convinced that the various arrivals from the RN are the signs of an imminent rallying of the former deputy. To the point, according to the HuffPost, to have anticipated the three additional points that this could bring to their champion.

If the former RN deputy from Vaucluse, who for several years has embodied this “right outside the walls” so dear to Eric Zemmour, has not yet announced which candidate she will officially support in the first round of this presidential election, other names known to the National Rally are circulating. This is the case of Senator Jérôme Ravier who recently appeared with Eric Zemmour during a failed trip to Marseille, or even the young MEP Nicolas Bay.

In the ranks of the Republicans, the names of the LR senators from Val d’Oise and the Rhône, Sébastien Meurant and Etienne Blanc, have also come back with insistence since the start of candidate Zemmour’s campaign.

Ukraine: “a dozen dead” in a Russian strike on military ground in Dnipro

Scandal in Paris for an alleged traffic of works in 2016

NRA conference kicks off: what is it and what role does the Uvalde shooting play? † NOW