“Les Contraceptés”, the comic strip that calls out to men about contraception

It was released in October and is already the subject of a third reprint. The comics “Contracepts” cardboard. The work sold particularly well at Christmas, slipped under the tree or placed on the living room table to raise the issue of contraception within the couple. The publication is even exported to several French-speaking countries such as Belgium, Switzerland and Canada.

“Contracepts”, what is it? This is a survey conducted for nearly three years by Stéphane Jourdain and Guillaume Daudin. The two journalists thus started from the observation that contraception still remained the problem of their companions today. “We realized that we weren’t even able to name the brand of their pill”, explains Stéphane Jourdain to franceinfo.

> Our interview with Stéphane Jourdain

The comic traces precisely the long path of pioneers who from the 70s and 80s in France defended male contraception. The fight of these avant-gardists from anar or feminist backgrounds, however, came up against the mentality advocating virilism. He also came up against the pharmaceutical industry, unconvinced to invest in research.

But never mind, Stéphane Jourdain and Guillaume Daudin show that through the decades, the idea that men could take over contraception has nevertheless been transmitted. Illustrated by the drawings of Caroline Lee, they notably meet new generation guys who meet in sewing workshops to make themselves a “heated brief”, a brief that raises the testicles to bring them to body temperature. The method makes it possible to stop the production of spermatozoa in just a few months… and to become contraceptive.

For lack of funding and studies, these briefs cannot be approved and marketed. So the only option is to make them yourself. 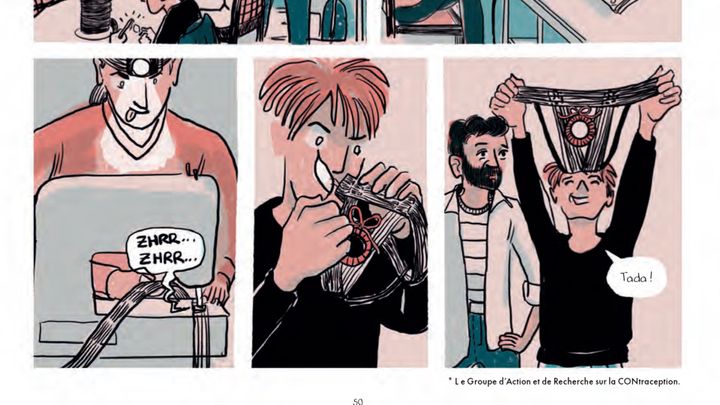 A hundred men today use heated briefs as a means of contraception. (“The Contracepts” (Steinkis editions))

Comics break taboos with seriousness and humor. It also turns out to be very educational as the knowledge delivered is so little transmitted at school. “We have a lot of feedback from readers and readers on our Instagram account, they tell us what is going on in their couple, we feel that it stirs something in their intimacy”, continues Stéphane Jourdain. This is the successful bet of comics: creating discussion.

“We wanted to start the debate and tell men that it was time to stop pretending not to know, that it is time to wake up and start sharing the mental burden of contraception”. The reception of the comic strip and its success should even soon turn into a screen adaptation, an option has been taken to decline it in fiction.