In Aubervilliers, Anne Hidalgo defends the interest of a “left of the real”

Officially, the Socialist Party has rented a very large room for sanitary reasons and to allow everyone “to put themselves at ease”. But the perhaps 800 chairs set up were far from all occupied. In 2022, the PS is struggling to bring more than 600 people to a meeting of its presidential candidate at the gates of Paris, in Aubervilliers. However, at the podium, Anne Hidalgo traces her path. Acting, again, the failure of its “simple, realistic, honest” proposal for the primary, she announces it: “I will defend our colors and the French will decide. “Earlier, the mayor of Paris, more than struggling in the polls (now between 2 and 4% depending on the institutes) affirmed “in the face of the difficulties one would like me to resign myself, to these prophets of misfortune: in your dreams “.

The public present makes him feel good. They and they came to hear the speech of a socialist presidential candidate and Anne Hidalgo offers them a pure version. The mayor of Paris wants to shamelessly defend a left of government, a left that does not distinguish itself “in furious words but in deeds”. And she lists some of the measures that make up her program, made public last week: abolition of Parcoursup, increase in the minimum wage by 15%, housing shield, third-party payment for the renovation of housing, revaluation of work… Anne Hidalgo defends this heritage, “ socialist identity” even in this campaign against those who would be “too happy” to see it disappear.

“Without the socialist left, without the social-democratic left, without this left of the real, without this left of action and government, the Republic loses its balance and social justice disappears. The mayor of Paris defends this positioning, this very posture, almost physically. She who clings to her desk like François Mitterrand during his 1988 campaign. For the candidate, far “from reality”, “the incantatory radicalism locks up the left” and destines it to remain a minority. As a guarantee, it offers to applause the list of the great socialist reforms carried out since May 1981. 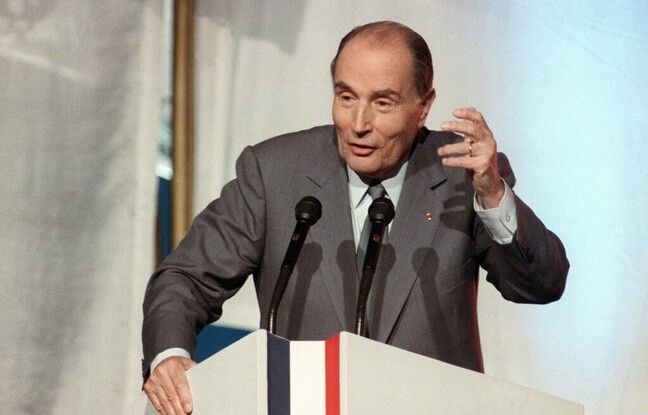 François Mitterrand at a meeting in Lyon during the 1988 presidential campaign. (archives) – GERARD MALIE / AFP

A stone in the garden of Jean-Luc Mélenchon, therefore, another in that of Yannick Jadot (“we don’t just want ecology, we want fair ecology”) but Anne Hidalgo focuses her attacks on the far right , the line “and this center which is only another line”. And it’s logical: as a socialist candidate, she is naturally destined to fight for qualification in the second round, and she hits on those who seem to be in a better position: Marine Le Pen, Eric Zemmour, Valérie Pécresse and, of course , Emmanuel Macron. But that seems to ring false, when we are almost ten or fifteen points behind the current threshold of a hypothetical qualification in the polls. “What else can she do? Note certain crusading socialist tenors. She’s still not going to go on stage announcing her defeat.”

Certainly. But now less than eighty days from the first round, the question that arises is whether Anne Hidalgo is not campaigning beyond her means. Not so much financial as political: no more polls have given the Socialist candidate 5% for weeks. Some activists regret that the program lacks a somewhat shocking measure that could have changed the course of the socialist campaign. And, failing to make people dream on the merits, the attractiveness of a “left government” passes at least in the prospect of victory that it offers to voters and voters of this part of the spectrum. Anne Hidalgo is far from it and this fringe of the electorate is undoubtedly already elsewhere, and in the first place on the side of Emmanuel Macron.