Flowering of the peach trees of Cieza (Murcia)

Cieza lives from agriculture. Above all, the peach, which is its flagship product, although there are also many terraces of plum and apricot trees. The various peach varieties bloom between February and March, creating a visual play of pinkish tones. Flowering in Cieza has become one of the biggest winter tourist attractions in the Region of Murcia. The flower of the peach tree is unmistakable: it has a pink tone with lilac touches and, sometimes, red that distinguish it from the rest of the tree flowers. The best landscapes in bloom can be found along the local road RM-B19, which goes from Cieza to Calasparra through Venta Los Reales. The places of La Macetúa, El Horno, La Parra and El Olmico are also very interesting, all on agricultural roads around that highway. Also along the paths that border the Segura River. In the tourist office (Plaza de España, s/n) they have some maps with routes through these places available to visitors. And it has announced that this year the parallel activities will be resumed between February 25 and March 20, although it has not yet published them on its website: More information.

Flowering of the peach trees in Aitona (Lleida)

In Aitona, an agricultural town about 22 kilometers from the capital of Lleida, in the Segrià region, people also live around peaches. The fields of pinkish tones surround the old town of Aitona, where traces of the three religions that coexisted in this region can still be seen, among others in the church of Sant Antolí, on the facade of the hermitage of San Gaietà —headquarters of temporary exhibitions — or in the Morería neighbourhood, which still retains its medieval essence. There are several routes around the town to enjoy the spectacle of flowering, both on foot and by bike. For example, the Serrabrisa route. Or the natural green path Aitona-Soses, parallel to the Segre river, also very interesting for bird watching. Another route runs along the hill located next to the town; It is very easily accessible and offers one of the best panoramic views of all the fields of fruit trees in bloom. The start of tourist activities around the peach trees in Aitona (free routes and by paid coach) is expected at the beginning of March. More information. 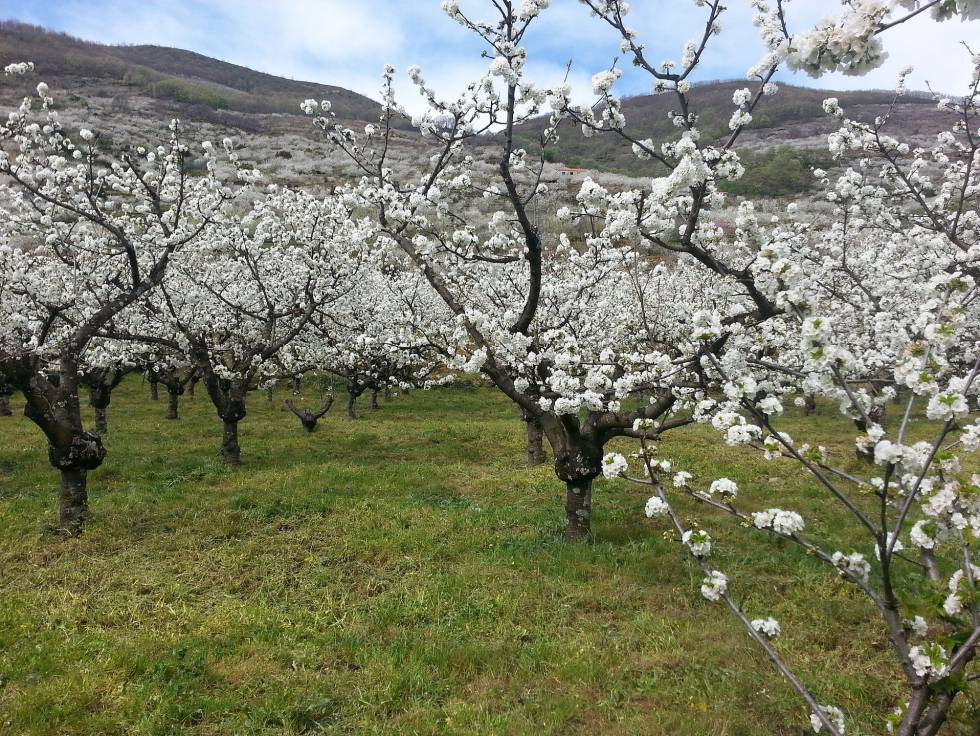 The Valle del Jerte, in the north of Extremadura, is famous for its cherry blossoms: an incredible spring spectacle with more than a million trees turning the valley’s slopes white. Following a centuries-old family tradition, the cherry trees are cultivated by hand on carved terraces in the high mountains of the Jerte Valley, between springs and pure air. They say that the best cherries in Spain are grown here, the Jerte cherry, which is a variety native to the area. Flowering in Jerte is a phenomenon that does not attend to specific dates, it depends on many factors (in 2019, 2020 and 2021 it arrived in the second half of March). For this 2022 it is expected to appear between March 20 and April 10; It usually lasts about 10 days and can be seen in all the municipalities of the valley. In those at lower altitudes, the cherry trees bloom earlier. As the days go by, the phenomenon rises in elevation, ending up in the areas of higher altitude and, consequently, colder. There is a linear route parallel to the Jerte River, following the N-110 which for 30 kilometers crosses Navaconcejo, Cabezuela del Valle, Jerte, Tornavacas and Puerto de Tornavacas; and another circular route of about 50 kilometers that crosses Valdastillas, Piornal, Barrado, Cabrero, Casas del Castañar, El Torno and Rebollar. More information.

Flowering of the plum trees in Nalda (La Rioja)

At the beginning of April, the plum tree in bloom is celebrated in Nalda, in the Iregua valley, a show that promotes the green queen claudia plum variety of this Rioja valley. The plum orchards reach their maximum splendor ahead of others, such as cherry or peach trees, making this area a paradise for plum blossoms in Spain. There are guided tours of the castle and hermitage of Villavieja, located on a hill with views over the valley from where you get the best view of the flowering. More information.

The camellia is the national flower of Galicia. It is very common throughout the west coast of the autonomous community, where it finds the optimal conditions for its development: a humid climate, mild temperatures and fertile and acidic soils. It was always a symbol of power and wealth, which is why it decorated the flower beds of the most stately country houses. A dozen of them —in addition to other public and private gardens— now form the Ruta de las Camelias, an itinerary to enjoy the spectacular massifs of camellias that grow between February and April. Two of the most recommended are the Pazo de Lourizán, in Pontevedra, with a magnificent botanical garden full of exotic and native species as well as a large collection of camellias, and the Pazo de Mariñán, on the way out of Sada (A Coruña) towards Betanzos. , where in addition to the gardens you can admire this superb tower-type construction, dating from the fifteenth century. It is said that there are more than 8,000 varieties of camellias. More information.