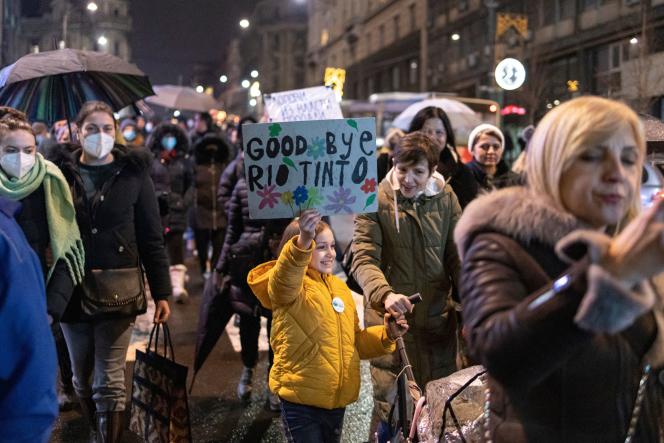 During a demonstration against Rio Tinto’s plan to open a lithium mine, in Belgrade, January 20, 2022. MARKO DJURICA / REUTERS

“Rio Tinto expelled. Serbia – Australia: 1 everywhere”. A few days after the forced return to the country of Serbian tennis player Novak Djokovic, expelled from Australia because of his vaccination status, the Serbian tabloid Kurir had the art of presenting the surprise decision of the Serbian Prime Minister to “put an end” to the controversial lithium mine project of the Anglo-Australian company Rio Tinto on its territory. At a press conference convened on the evening of Thursday January 20, Ana Brnabic announced that “all permits and all administrative acts [liés au projet minier] [avaient] been cancelled”.

“It’s the end of the Jadar project and Rio Tinto,” repeated the Prime Minister, as new demonstrations against the project were announced in the coming days. Scheduled to open in 2026 along the Jadar River in the southwest of this Balkan state, Rio Tinto’s lithium mine aimed to become Europe’s largest supplier of this crucial ore for car batteries. . The mining giant planned to extract “58,000 tonnes of lithium carbonate per year”, enough “to supply more than a million electric cars” from a continent which must for the moment make its ecological transition with lithium from Latin America and Australia.

Read also Article reserved for our subscribers In Serbia, a lithium mine project led by Rio Tinto faces an unprecedented slingshot

It was counting without an unprecedented mobilization fueled by the rise of environmental concerns in a country already extremely polluted, all this a few weeks before the general elections scheduled for April 3. In November and December 2021, tens of thousands of Serbs took to the streets to protest against a project suspected of being particularly harmful to the region’s rivers. Long supporting an investment planned for more than fifteen years and likely to bring “600 million euros per year” to Serbia, the president and strongman of the country, Aleksandar Vucic, had then made a first step back, by suddenly making withdraw two bills accused by protesters of favoring Rio Tinto.

However, this was not enough to completely silence the protest. “All the experts say it’s impossible to extract lithium without causing an ecological disaster,” insists Savo Manojlovic, a 35-year-old lawyer who has become one of the main leaders of the sling movement. “We are satisfied with the cancellation of the project, but we also want a general ban on the extraction of lithium throughout Serbia”, claims this activist, who, for this reason, is considering continuing the mobilization. “The problem is not just Rio Tinto,” he said.

You have 45.79% of this article left to read. The following is for subscribers only.