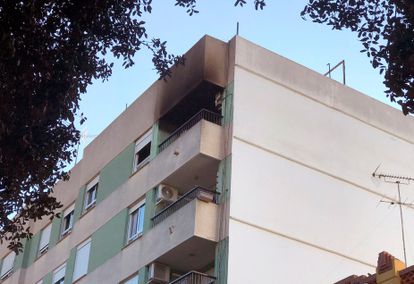 Moncada house where a mother and her son died this Saturday. Pablo Ortiz (EFE)

The fire has once again ignited the population of Moncada. An octogenarian woman and her sixty-year-old son have died in a fire declared around 5:15 a.m. this Saturday in a house in the municipality. Last Tuesday, another fire killed six people from the Residence for the Third Age in the town, 12 kilometers from Valencia. The flags were going to be raised after the three days of mourning decreed by the City Council due to the tragedy in the residence. Today, it has been decided to keep them at half-staff.

The causes of the flames in the man’s room, who lived alone with his mother, are still unknown. The Civil Guard and the Scientific Police are investigating the event that occurred in the central Plaza de Sant Jaume in a town of almost 22,000 inhabitants.

“The week we’ve been in is incredible!”, lamented Martín Pérez Aranda, Councilor for Citizen Security and Coordinator of Civil Protection, for the two deadly events in just four days. The councilor explained to this newspaper that the fire this morning started on the fifth and last floor of the building. There are two more houses on the landing of the damaged flat. One is inhabited by students from the nearby CEU Cardenal Herrera University, but at the time of the incident it was empty; the other is occupied by an older couple. The man has vacated the building by his own feet; In the end, the woman was forced to leave because she took a long time getting dressed, according to some witnesses. The rest of the building has also been evacuated without major difficulties.

“It is being investigated and no possibility is ruled out. The house already suffered another fire more than 10 years ago, on that occasion caused by the daughter, as she herself confessed. But she no longer lives there. Both sons have problems. The Civil Guard and the Local Police have had to go to the flat on other occasions due to domestic problems, discussions”, explained the councillor.

The Emergency Center of the Generalitat Valenciana has received notice of the event around 05:20 hours, and four firefighters from the Valencia consortium, agents of the Local Police and Civil Guard have moved to the scene. As the mayor of Moncada, Amparo Orts, told Efe, it was the residents themselves who started the evacuation of the building when they detected the smoke and alerted the authorities to the event.