Rarely in these times can positive news be given about the increasingly damaged coral reefs in the world, so UNESCO has not hesitated to take the opportunity to celebrate in style a more than unusual event: not only there is a coral reef totally unknown until now and it is one of the largest in the world; In addition, it is in very good condition and was even spared from a disease that affected other neighboring ecosystems a few years ago. The discovery has been made by a UNESCO-supported scientific mission off the coast of Tahiti, in French Polynesia, and its promoters hope that it will serve to make further advances in maritime preservation, in knowledge of biodiversity and even in medicine.

“When we talk about coral reefs, we know that they are home to around 25% of marine biodiversity, so they are true nuclei of marine biodiversity. They could also provide new cures for diseases such as cancer or arthritis,” Julian Barbière, head of UNESCO’s marine policy, explains to EL PAÍS about the implications of the discovery. Without forgetting, adds the telephone conversation specialist, that these reefs “protect coastal communities from storms, high waves and even tsunamis.”

The coral reef now discovered is at a depth of between 30 and 65 meters, which in itself is unusual, says Barbière, since until now those that were known were at most 25 meters. And this “suggests that there may be more large coral reefs in the ocean at those depths—in the so-called twighlight zone The twilight zone from the ocean, between 30 and 120 meters deep – and that we simply did not know, or have not been able to track them until now, ”he explains. Which in turn “opens many questions” about whether there are more reefs of this type at these depths, and “where and how we could find and locate them.” 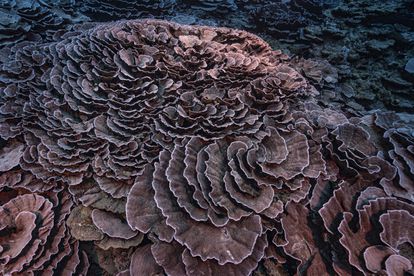 A detail of the discovered corals. Alexis Rosenfeld (AP)

Its size is also unusual, about 3 kilometers long and between 30 and 60 to 65 meters wide. This makes it “one of the largest healthy coral reefs on record,” UNESCO said in a statement. The giant rose-shaped corals are up to two meters in diameter, according to the United Nations institution.

But if something has surprised the scientific team that found the reef, it is its good state of preservation, which contrasts sharply with other corals in the same region.

“French Polynesia suffered a major coral bleaching event in 2019. However, this reef does not appear to have been significantly affected. The discovery of this reef in such pristine condition is welcome news and may inspire future conservation. We believe that the deepest reefs can be better protected from global warming”, declared Laetitia Hedouin, from the National Center for Scientific Research (CNRS) of France and the environmental research organization CRIOBE, present at the UNESCO mission carried out in November of 2021 the diving expedition that found the new reef.

Finding a coral reef in good condition is especially encouraging at a time when many of these ecosystems are seriously threatened, as has been the case in recent years with Australia’s Great Barrier Reef. Since 1950, Barbière notes, about 50% of the world’s coral reefs have been lost.

Answering the question that the scientists involved in the project are asking about how these reefs have managed to be so resistant in an area where so many other corals were damaged may provide clues for the next big step in the discovery: how to protect this new focus of biodiversity from future natural and, above all, human depredations.

Beyond the scientific analyzes that will now be carried out on corals to measure their resilience capacity, Barbière recalls that the preservation of these ecosystems in particular and of the oceans in general depends, in large part, on the “political will of the countries” to participate, among others, in the various protection mechanisms available to UNESCO, which is the United Nations agency in charge of ocean research.

And time, as in all climate change issues, is pressing: “When you look at the conservation goals for the oceans, science tells us that we have to protect 30% of the ocean for conservation and the reality is that only we are protecting between 7% and 8%. There’s still a big gap there. In addition, we are not protecting anything in the open oceans beyond national jurisdiction, which is another challenge, because they are also huge ecosystems that must be protected”, warns the scientist.

To be able to do that, you have to know the oceans, says Barbière. And currently, very little is known about the oceanic mass that surrounds the Earth, as the discovery of the gigantic reef in Tahiti demonstrates.

“To date, we know better the surface of the Moon than the depths of the ocean. Only 20% of the entire seabed has been mapped”, recalled the Director General of UNESCO, Audrey Azoulay, when welcoming the discovery of the reef.

To correct this lack of knowledge, UNESCO is actively involved in the Seabed2030 project, who wants to complete a high-resolution map of the ocean floor by 2030. In addition to national and international institutions, Barbière stresses the importance of involving the private sector in the project. “These data and maps are an essential part of understanding our planet, having better fisheries maps to see where the fish can be found, but also the biodiversity. It is something basic, you cannot manage what you cannot measure, the map is the base and it will require international efforts”, he affirms.