Media concentration: six moments to remember from Vincent Bolloré’s hearing in the Senate 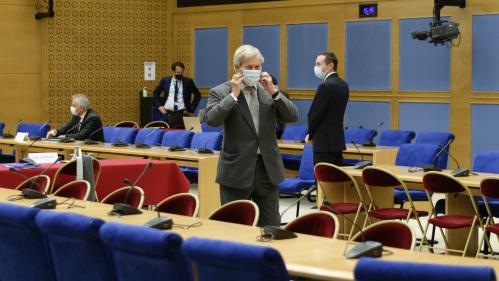 “It’s an understatement to say that your audition is highly anticipated.” Centrist Senator Laurent Lafon and his colleagues from the Commission of Inquiry into Concentration in the Media interviewed for two hours, Wednesday, January 19, the billionaire Vincent Bolloré. The opportunity to explain himself for the main shareholder of Canal +, the publishing groups Editis and Hachette, press titles (Le Journal du dimanche, Paris Match, the Prisma Media group), radio Europe 1 and d ‘Havas, advertising and communication giant. “We are very small”, however minimized Vincent Bolloré, defending the “made in France” of Vivendi – 15 billion dollars in market capitalization – against the American and Asian giants – 238 billion for Netflix, for example.

For six minutes, the rapporteur David Assouline went through the endless list of activities of the Breton businessman’s group. “Why build such an empire?” questioned the elected socialist. “It is only an economic project. The media sector is the second most profitable sector after luxury”, argued Vincent Bolloré, sweeping away any desire to impose this or that vision of the world.

“Our interest is not political, is not ideological, it is a purely economic interest.”

The billionaire also minimized the share of information in his group, “insignificant in turnover with us”. And insisted on the low importance of its own media in the French rankings, with great reinforcements of slides and diagrams.

Vincent Bolloré was also questioned about the muscular takeovers of certain media, with many departures at stake, in particular at Europe 1. “On questions of interventionism, we always repeat two or three stories, which are always the same for five years”, he defended himself. At the time, he adds, Canal+ was thus losing 400 to 500 million per year. “When big Gafa and big sports groups arrived, Canal found itself in more difficulty,” he continued.

Vincent Bolloré says he put on the firefighter’s tunic: “The one who was sent was me, which was my role. And I was the scapegoat.” For example, Vincent Bolloré estimated the presence of 500 people at the Cannes Film Festival at 15 million euros for the Canal+ group. According to him, 400 million euros were “gobbled up” in the i-Télé news channel.

“I don’t think there’s any rough handling, but there’s just the courage to say things.”

“It’s brutal to tell the truth,” added the businessman. But “there is great satisfaction in the teams to know that the group is making money, that the situation is restored”.

Recently, the Sunday Journal Journalists Society expressed its concern after the appointment of CNews columnist Jérôme Béglé at the head of the weekly. “This makes us fear a rapprochement with the chain of the Bolloré group, opinion media which claims to be such”, explains a press release from the editorial staff, which belongs to Lagardère, whose main shareholder is Vivendi. “I have no responsibility in Le Journal du dimanche, replied Vincent Bolloré. It is Arnaud Lagardère who manages his group.”

“I have always said that I was a Christian democrat”, declared Vincent Bolloré, praising his taste for “freedom” and insisting on his family history, with in particular a father in the Resistance and two members of his family among the 177 French present during the landing. “I don’t think I have a DNA that doesn’t allow me to say that I don’t particularly love my country and democracy. I love both.”

The billionaire also defended himself from influencing the teams of his media. “The group is so large that you can say one thing and its opposite about my political opinions,” he said.

“I don’t have the authority to name anyone inside the chains.”

“I can suggest, I can give my opinion… And if someone doesn’t want to do it, they don’t.” The billionaire thus affirmed that his “personal capacity to go and impose things [n’était] not very important”.

Asked about the distinction between a chain of debates and a chain of opinion, Vincent Bolloré rejected the idea of ​​​​a militant inflection: “No one has the ambition or the intention or the error of trying to make chains of opinion, this is not the objective of the Vivendi-Canal+ group.” The billionaire, who describes himself today as a simple “advisor”, will pass the orders to his children on February 17, the day of the bicentenary of the family group. “I may stay in the lightning rod,” he said, however.

4On his complaints against journalists

Senator David Assouline spoke about the documentary Vincent Bolloré, a friend who wishes you well?, awarded an Albert-Londres prize in 2017. Vincent Bolloré had filed a defamation complaint and claimed 450,000 euros, before being dismissed by the courts in 2018. “I want to be accused of the things I have committed, I am not perfect and I do not shirk”, replied Vincent Bolloré during his hearing, denouncing “an amalgam”.

>> Freedom of the press: what does the Reporters Without Borders documentary show about the Bolloré group?

The procedures launched by the billionaire are however innumerable. “We realized that we were 30 to 40 different journalists, from different media, all sensibilities combined, to have been attacked by Vincent Bolloré”, explained to franceinfo Tristan Waleckx, author of the documentary and journalist at France 2.

The name of Eric Zemmour came up several times, in particular because of the insistence of the PS reporter David Assouline. Faced with questions about the place given to the far-right polemicist on the CNews channel, the billionaire kicked into touch, accusing the chosen one of taking “little bits of things” and putting them “together to make a story”. “You could say I’m a deconstructionist, woke,” he replied in the opposite direction. “You saw the controversy over iel. iel is little Robert, it’s Editis, it’s Vincent Bolloré.”

“Eric Zemmour was well known before he first met me. He was on other big channels and that was no problem.”

“Eric Zemmour was publishing books in the hundreds of thousands of copies long before he returned to CNews. He was on Le Figaro, on M6 …” he still justified himself. “There are so many currents of thought in our books, in our broadcasts… No one thought, no one knew that he would be President of the Republic.” A slip corrected by David Assouline: “Not yet.”

“I have no more weight on him than Nicolas Tavernost, the owner of Figaro, the Dassaults… And I only had lunch with him once, the time he was offered to join CNews” , added Vincent Bolloré. “He has the right to express himself, he does what he wants. His program does not concern me. I do not do politics and I have never done politics.” Chantal Bolloré, the billionaire’s sister and member of the group’s board of directors, is however one of the donors to Eric Zemmour’s campaign, according to Mediapart.

“I find that there is a great pluralism [des médias] today”, declared Vincent Bolloré. “The real danger is the Gafa, which are considerable weights, which pass through uncontrolled, uncontrollable pipes.” According to the billionaire, we must therefore allow today the media “to develop, to make them earn money, while respecting pluralism.”

Media concentration is a problem, of course, but the size of the competitors is also a problem.”

In this respect, Vincent Bolloré strongly denounced the planned evolution of the media chronology which opens the way to financing of French creation by SVoD platforms (Amazon, Apple, Disney or Netflix), against faster access to these creations. “If it’s your choice to open the door to Gafam to destroy Canal, you do what you want and then Canal will manage, adapt.”