Increasing the AOW is not as simple as it seems

The discussion about an AOW increase this week seemed clear, but appearances are deceiving. The entire opposition demanded in the House of Representatives that the AOW benefit be raised by 7.5 percent, just like the minimum wage and social assistance. The cabinet thought the price was too high – 2.4 billion euros annually – and postponed a decision for a while.

The fuss about this is great. PvdA leader Lilianne Ploumen called it “the ax to the root of the welfare state” that the state pension does not increase with the increase in the minimum wage. The coalition is letting the elderly “fall like a brick”, said Joost Eerdmans of JA21.

In reality, an AOW increase is not that clear at all, experts warn. These are fundamental choices that have not or hardly been discussed in the debate. What does an increase mean for future generations, for example? And does the House of Representatives want a net AOW benefit to remain significantly higher than a social assistance benefit?

This fundamental discussion will have to be conducted quickly, according to pension and social security experts. “You now see simple reflexes,” says professor of pension markets Fieke van der Lecq. “I have the idea that the discussion is now so symbolic,” says Pierre Koning, professor of the labor market and social security (both affiliated with the VU University Amsterdam).

The cabinet wants to present a plan in the spring to improve the purchasing power of pensioners, Prime Minister Mark Rutte said on Wednesday. An AOW increase is one of the options.

Where does that fuss come from? Normally, the AOW always increases with the minimum wage, as do social assistance and a number of other benefits. These amounts are usually increased twice a year, based on the wage increase of employees in the Netherlands.

But now that Rutte IV has announced an additional increase in the minimum wage, the AOW is suddenly the only benefit – one-off – that does not increase with it. The cabinet is leaving the elderly ‘out in the cold’, concluded SP leader Lilian Marijnissen.

Retirees also came out badly with the calculations of the Central Planning Bureau (CPB). The planning office expects a standstill among workers in the coming years, while retirees will decline by 0.4 percent per year on average.

In addition, most retirees have almost seen their supplementary pension come to a standstill for twenty years. The state pension continued to rise, but the large pension funds have been unable or hardly able to increase their benefits since the financial crisis of 2009, resulting in a loss of purchasing power – especially for people with a high supplementary pension. 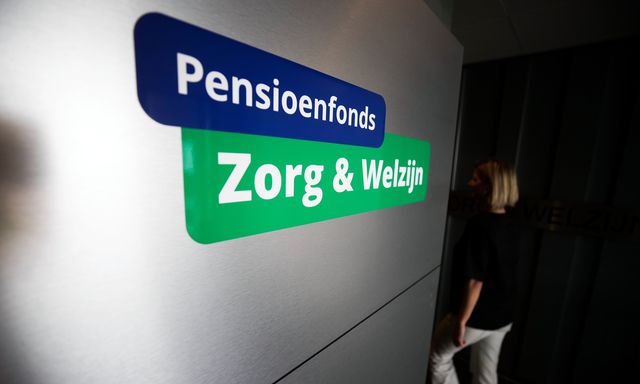 Also read: Funds are in good shape, but are not allowed to increase pensions yet

Professor Koning understands that the cabinet is reluctant. An AOW increase is a ‘horse remedy’, he says. It is not only expensive, but also unfocused: rich retirees benefit just as much as poor ones.

In doing so, the cabinet would strongly oppose the rest of the coalition agreement, which mainly strengthens the low and middle incomes. For example, the increase in the minimum wage and social assistance is intended to “strengthen the subsistence minimum”, says the coalition agreement. Only the lowest incomes benefit from this measure.

Rutte IV also mainly helps the low and middle incomes among the employed by increasing the ’employee tax credit’ – a tax benefit that decreases the more you earn.

The government has come up with something similar for retirees: an increase in the ‘elderly discount’, which is also income-related.

However, this solution has an important drawback: pensioners with the lowest incomes do not benefit from a higher tax credit for the elderly. They already pay little or no tax, which means that they cannot ‘cash in’ on this tax advantage. This problem affects about 1 in 11 retirees. The cabinet is now taking the time to find out how this group in particular can be helped.

Opposition parties from left to right maintain that the state pension should be raised for everyone. That surprises King. “This is not at all suitable for left-wing parties, because you are spilling an incredible amount of money with the rich. And if as a party you also have something with young people, you are doing it all wrong.”

Because the bill will probably end up with them. The CPB has already warned that Rutte IV will bear the burden of future generations very late, because it increases the national debt to 92 percent of the Dutch economy (GDP).

With the AOW increase that the opposition wants, the national debt could reach 106 percent. That Wim Suyker recently calculated, a retired CPB employee who for years made such estimates for the planning office. 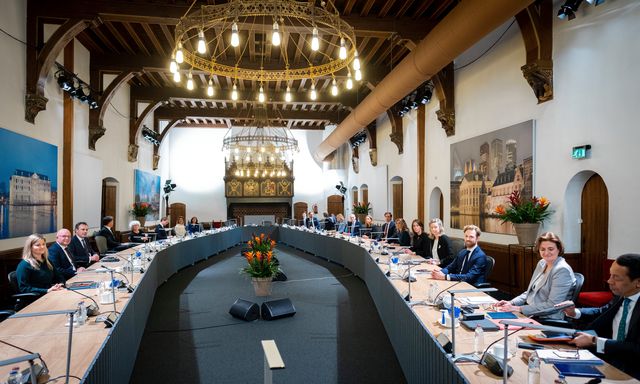 Left-wing opposition parties proposed a different financing method: more taxes for the wealthiest Dutch. That group is now kept out of the wind in the coalition agreement.

Wherever the bill ends up, it seems clear who will benefit from an AOW increase: especially the current elderly. They go straight ahead. But by the time young people retire, the increase is likely to have already been negated. The reason? The supplementary pension will gradually decrease.

This is due to how supplementary pensions are arranged in the Netherlands. In collective labor agreements, employers and trade unions agree on an ambition: how much income should a pensioner be able to receive after 40 years of work? This is often 70 percent of the salary that a person has received on average during his or her career.

If employers use the AOW increase to allow their staff to accrue less pension, it is disadvantageous for young employees, says professor of pension markets Van der Lecq. They will contribute to the higher state pension for current retirees through tax, but they will build up less supplementary pension themselves for the future. “They lose out on both sides.”

On the other hand, employees have more net wages left over if they have to pay less pension contributions.

Higher than the assistance

Koning missed an important political discussion this week: should the ‘subsistence minimum’ for pensioners remain so much higher than that for people on social assistance benefits?

A couple with two social assistance benefits now receives a net amount of 1,536 euros per month. But if they receive two AOW benefits, that suddenly becomes 1,715 euros per month: more than 10 percent more. That calculated two economists recently in economists magazine ESB, with the amounts from 2021.

So even if the social assistance benefits were to increase by 7.5 percent, it would remain lower than the state pension. “What is always missing,” says Koning, “is a political discussion about why that difference should exist. Do we consider pensioners to be more vulnerable than people on welfare? Do they need more money?”

You could argue that social assistance should be less generous, says the professor, because these unemployed have to look for a job. “But that is why obligations have already been imposed on them, such as a search obligation.” Koning himself suspects that people on welfare need more money for their livelihood. “Especially for people who have children, and therefore incur more costs.”

But whatever politics decide, these differences must in any case be included in the decision-making process, says Koning.

In the past eight years, the net AOW benefit has also risen slightly faster than social assistance, due to all kinds of tax benefits, the ESB article stated. The authors of the article, the economists Jan Donders and Flip de Kam (self-retired), offer a possible – and somewhat cynical – explanation: “That politicians do not want to lose the favor of more than three million elderly voters, while the much smaller group of welfare recipients in elections also has a lower turnout.”

It was clear this week that the government wants to improve the purchasing power of pensioners. The most important question is: in what way?

A scheme that MPs from coalition parties and Prime Minister Rutte mentioned this week was the Income Support AOW (IOAOW). A relatively unknown supplement to the AOW that all retirees automatically receive. But this scheme – just like the AOW itself – is not income-related.

There are ways to favor lower incomes through taxation, says Koen Caminada, professor of empirical analysis of social and tax regulations (Leiden University). For example, the cabinet could introduce a new ‘elderly allowance’, even if this seems politically unlikely after the Allowances Affair. “You can also look at an increase in the health care allowance,” he says. “It is mainly requested by two groups: students and seniors.” 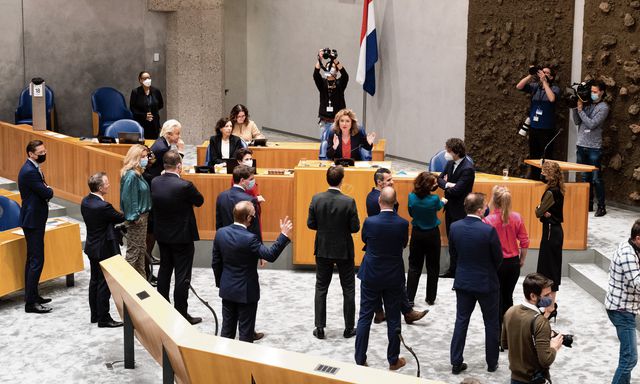 Also read: The billions are also a curse for Rutte IV

Professor Koning suggests ‘an annual allowance’ that people with a small pension can request from their municipality. That too has drawbacks. The most vulnerable retirees will then have to discover for themselves that this scheme exists and will then have to find out how to apply for it.

Another scheme offers more options: the Supplementary Income Provision for the Elderly (AIO). This is a kind of social assistance scheme for people with incomplete AOW accrual. This concerns people who have not lived in the Netherlands all their lives. The AIO supplements their benefit to slightly above the social assistance level – provided they do not have too much income and assets.

The cabinet can extend this arrangement, says Kees Goudswaard, professor of social security at Leiden University, “so that people with a full state pension and perhaps a small pension are also entitled to a supplement”. The question then is whether the strict capital requirements should continue to exist, because those who own a house can now, for example, not get an AIO.

Remarkably, this week there was no politician who mentioned the AIO. Although Caminada says that politicians should not interfere with technology at all. “Now one is calling: the AOW must go up, and the other: the elderly person’s discount must go up.” He would rather see politicians speak out about what they want to achieve: purchasing power repair for the poorest or for all pensioners. “And then officials can then look at how you can best do that.”