CAN 2022: humiliated by Côte d’Ivoire, defending champion Algeria is eliminated 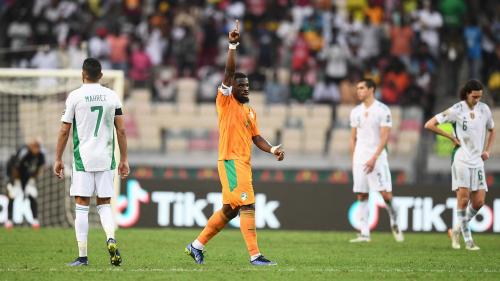 For the Fennecs, victory was mandatory to see the rest of the African Cup of Nations. But the Algerians, uninspired, cracked three times against the Ivorians (3-1), Thursday, January 20. Sofiane Bendebka saved the honor of his family by responding to goals from Franck Kessié, Ibrahim Sangaré and Nicolas Pépé. The title holders are eliminated from the competition.

It is on a lawn in a pitiful state, in Douala, that the Algerian nightmare in this CAN 2022 ended. Struggling since the start of the competition and unable to score, the Fennecs seemed overwhelmed against Côte d’Ivoire. Despite some changes in the starting lineup, with the tenure of Saïd Benrahma and Ramiz Zerrouki, the Algerians did little to worry the Ivorians.

Faced with the technical waste of the Algerians, the Elephants were much more inspired to open the scoring, in the 22nd minute, thanks to a goal from Franck Kessié. Ibrahim Sangaré doubled the mark shortly before half-time.

Returning from the locker room, Djamel Belmadi attempted a tactical move by bringing in Islam Slimani in second point, but it was the Ivorians who scored a new goal, thanks to Nicolas Pépé in the 55th minute.

On the edge of the abyss, Algeria reacted by obtaining a penalty, missed by Riyad Mahrez, then closing the gap a quarter of an hour from the end of the match, through Sofiane Bendebka. His teammates then multiplied the chances in the last minutes of the meeting but may regret a too late start. While remaining on 34 games without defeat before CAN 2022, Algeria, defending champion, is eliminated from the group stage, as in 2017 in Gabon.