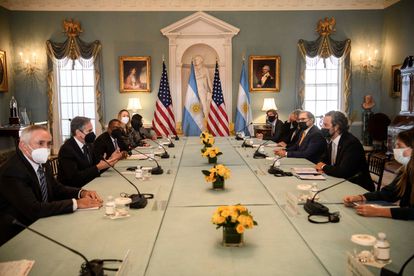 In February 2020, Argentine President Alberto Fernández compared the negotiation of foreign debt to a game of poker. “It is not true that we do not have a plan. It is true that we do not count it and we do not count it because we are in full negotiation. And to count it would be to uncover the cards. We are playing poker and not with boys,” he said during his trip to France. That August, the Peronist Executive announced the restructuring of 99% of the debt of 68,000 million dollars in the hands of private bondholders. The covid-19 pandemic was in its infancy and Fernández enjoyed high popularity.

Two years later, the game has been complicated for Argentina. The International Monetary Fund (IMF) now sits at the table for a debt of 44,000 million dollars and time is running out: in March the South American country must pay a maturity of 2,900 million dollars that it cannot face. A new extension with the creditors of the Paris Club also depends on the agreement with the IMF.

The Argentine economic team led by Minister Martín Guzmán warns that “no one will be happy with what is signed” and tries to counteract the criticism that comes from the opposition and part of the Government, but good cards are scarce. This week, instead of the expected backing from the US administration that he was seeking, it demanded that he present a solid economic plan to the international organization. The markets show signs of their distrust with falls in dollar bonds and a rapid devaluation of the parallel price of the peso, and the surveys reflect the great pessimism of Argentines regarding the economic horizon.

Argentine Foreign Minister Santiago Cafiero was received on Tuesday by US Secretary of State Antony Blinken. The North American country is the main shareholder of the IMF and Cafiero was looking for a clear signal of support for Argentina, but Blinken limited himself to supporting the ongoing negotiations. Biden’s chief diplomat also reiterated the message that the US economic authorities had previously conveyed: “He encouraged Argentina to present a solid economic policy framework that returns growth to the country,” the State Department wrote in a statement.

A few weeks ago, the IMF admitted that the credit granted to Argentina under the presidency of Mauricio Macri – the largest in the organization’s history – did not meet the objective of restoring market confidence or reducing fiscal imbalances. But he doesn’t want a new failure. Now, to grant the program to expand the facility of the fund requested by Argentina, and which would give it a grace period of at least four years before starting to pay the debt, it requires a “credible” economic plan aimed at reducing the deficit. tax and inflation, which closed 2021 at 50.1%.

Guzmán offers to achieve primary fiscal balance in five years, but his proposal does not convince the IMF negotiators in Washington or the opposition and the government sector in Buenos Aires, which rejects any adjustment. Among the latter is the influential former head of state Cristina Fernández de Kirchner, today vice president, who criticizes the fiscal restraint applied by the Ministry of Economy and this Tuesday attacked Macri again for having resorted to the IMF in 2018. “In the year 2021, the macrista pandemic was even more expensive for the National State than the covid-19 pandemic, “wrote Fernández de Kirchner in a public letter when comparing the 5,160 million paid that year to the IMF in debt maturities with “the 420,000 million pesos [cerca de 4.000 millones de dólares al valor oficial en 2021] that were allocated to measures aimed at mitigating the effects of the pandemic [de covid-19]”.

“The macrista pandemic takes away the foreign currency that we need so much as a country because the IMF must be paid completely and exclusively in dollars… because as much as we insist, it does not accept pesos from us,” concluded the vice president. In response, Macri retweeted a message from his former Economy Minister Alfonso Prat-Gay: “It turns out that the fault lies with the one who tried to order that disaster.” In his message Prat-Gay assured that Alberto Fernández has indebted Argentina more than Macri and asked the Peronist government to stop victimizing itself. “Take charge once and for all of the mess you got into and continue to get Argentina into!”

CFK looted the BCRA; he stole savings in AFJPs and years of co-participation to the provinces; it melted down the national state, transforming the surplus into a deficit and increasing the debt by US$129 billion.
But it turns out that the fault lies with the one who tried to order that disaster.#Don’tLieMore pic.twitter.com/nmMgsh4QmN

The exchange of accusations shows the polarization of the Argentine political class, another negative letter in the face of dialogue with the IMF. The agreement reached in Washington must be approved later by Congress, which will force the ruling party to agree with part of the opposition.

Waiting for the game to end, the nervousness grows. On Tuesday, the country risk exceeded 1,900 points and Argentine debt bonds in dollars fell again, with return rates close to 25% per year. This Wednesday, the peso suffered its second consecutive devaluation of the week in the parallel market, to which Argentines resort due to the restrictions imposed by the Fernández Executive on the purchase of foreign currency. The moneychangers offered 213 pesos for every dollar, a record price that is almost double the official value of the US currency. Pessimism is visible on the streets as well, with growing anger at politicians over the rapid impoverishment of recent years.