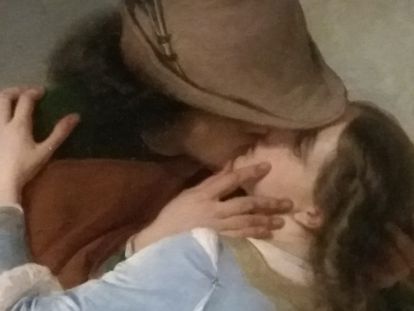 A fragment of ‘The Kiss’, the work of the Italian painter Francesco Hayez, made in 1859 and kept in the Brera Pinacoteca, in Milan.

There are times when scientific names are displaced by other names, much more evocative and literary.

This is the case of the so-called “anatomical snuff box”, which is the triangular area that remains on the back of the hand at the level of the scaphoid and the trapezium, through which the radial artery runs. Because it was used to place the monkfish before being sniffed, the name of anatomical snuffbox displaced that of radial fossa.

Another example, taken from a character from the Brothers Grimm, is the so-called Rapunzel syndrome, just like the protagonist of the story, famous for the length of her braids that she unfurled like a ladder along the façade of the tower where she was held captive. In this way, her lover could go up to see her. With the literary name of Rapunzel syndrome, the scientific name of trichophagia was displaced, a disorder of psychiatric origin that consists of the compulsive ingestion of hair with all that this implies for digestion, since, due to the sediment formed by the skeins in the intestines, a mass is created that is difficult to evacuate naturally, and surgery must be applied for this.

The latest example, which these days has jumped back into the news, is what is known as “kissing disease”; an ailment that alludes to a virus, and that every time we hear it takes us back to past times, when tuberculosis was an attribute rather than a disease for the artists of Romanticism, past times when Richard Wagner put music to the myths that they spit blood on their handkerchiefs.

The scientific name for kissing disease is mononucleosis. It is a virulent disease that spreads through saliva, hence such a literary name. The virus that causes mononucleosis is the so-called herpes virus 4 or Epstein Barr virus (EBV), named in 1964 by the British scientists MA Epstein, YM Barr and BG Achong, who were its discoverers in the cells of an organism with lymphatic cancer. Said like this, it is no longer so literary.

And all this comes to mind because a few days ago, an American study shed light on the origin of multiple sclerosis (MS), an autoimmune disease in which our own defenses turn against us, destroying myelin, which is the nerve cell envelope. This study, carried out by a team from Harvard University and published by the journal Science, comes to point out the aforementioned virus as one of the factors in the development of MS. But not the only one, since the genetic factor and the lack of vitamins are also factors that are related to EBV when it comes to developing MS.

In this way, not everyone who has the virus will develop the disease. What’s more, EBV is so common that few people don’t have it. All in all, the news these days may lead us to think that EBV causes MS, but we all know that 100% of divorcees have been married, and this does not mean that a wedding is the cause of divorces, although it is necessary being married and then getting divorced, as explained by the neurologist Federico Castillo Álvarez in one of his Twitter threads where it illustrates us in a simple way about everything related to MS.

With this, the so-called kissing disease becomes something more than a disease caused by an affectionate contact; it is a possibility that opens doors to the origin of a disease, MS, which affects about 2.5 million people.

the stone ax it is a section where Montero Glez, with prose will, exerts his particular siege on scientific reality to show that science and art are complementary forms of knowledge

News channel says sorry for crazy texts in the picture