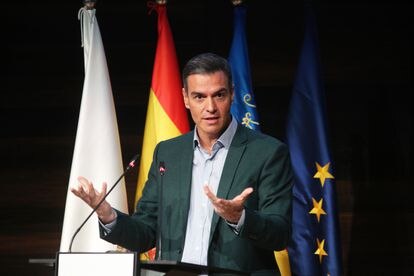 The President of the Government Pedro Sánchez, this Wednesday in Alicante.JOAQUIN DE HARO RODRIGUEZ

The Government anticipates that the 250-euro housing rental aid bonus for young people will be consolidated within the framework of Spanish social policy and even “expand both in beneficiaries and in amount” at the end of the two-year framework proposed in the newly launched proposal. In addition, the Executive also intends to expand the support of this same group for property ownership to “municipalities with a population of less than 10,000 inhabitants” with the aim of “fighting against depopulation”, as President Pedro Sánchez has advanced in a act in Alicante.

Sánchez’s visit was intended to disseminate the package of measures on housing approved this Tuesday in the Council of Ministers. To do this, he visited the works of a regeneration plan for the San Antón neighborhood in Elche and, subsequently, addressed a group of young people at the headquarters of the European Union Intellectual Property Office (EUIPO), with headquarters in Alicante. From there, escorted by the Minister of Transport, Mobility and Urban Agenda, Raquel Sánchez, and the President of the Generalitat Valenciana, Ximo Puig, he outlined the measures decreed to combat “the delay in emancipation suffered by many of our young people”. Official data says that “85% of young people still reside in the family home,” says Sánchez.

Among these aids, the President of the Government has highlighted the bonus that grants 250 euros so that low-income young people can access the rental of a home, applicable, in principle, for the next two years. However, his intention is that this type of social policy is here “to stay”, which is why he has advanced that he intends that the bonus be extended both in beneficiaries and in the amount they can receive. Sánchez also defends the financing of private insurance to cover possible cases of non-payment of rent, the expansion of the affordable housing stock, aid for cooperative housing and tax incentives for landlords. A plan that receives 10,000 million euros in total.

At a time when “housing prices are rising, as a result of the economic recovery”, assures the Chief Executive, “and the urgency in the demand of young people”, among other factors, the resolutions approved this Tuesday also deal with to “expand support to young people for access to property ownership”. The idea is that the purchase of real estate can be carried out both in large cities and “in small municipalities, with a population equal to or less than 10,000 inhabitants”, so that depopulation can be curbed.

In Sánchez’s opinion, the “job insecurity and the difficulties of economic and social integration” suffered by young people convert the proposals aimed at this sector of the population into “State policy”. Hence, investment is made in education to improve their employability, that the labor reform contemplates “fence the evil of precariousness and the high temporary nature of contracts” and that proposals are set to reduce “the impossibility of many young people to emancipate themselves and build a life project”.