Ligue 1: Strasbourg provides against Clermont, Lille strolls in Lorient … What to remember from the late matches of the 19th and 20th days 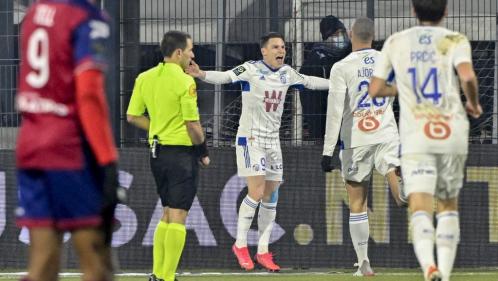 Candidates for maintenance in the elite were opposed to contenders for Europe, Wednesday, January 19, on the occasion of three late games. The Lille-Lorient and Montpellier-Troyes meetings counting for the 20th day had been moved following the detection of cases of Covid-19 in the Breton and Trojan ranks. For their part, Strasbourg and Clermont played a late match of the 19th day, which could not take place due to weather conditions. Strasbourg, Lille and Troyes emerged victorious.

It’s official, Strasbourg is playing in the big leagues today. Dominating, the Alsatian club won on the lawn of Clermont (2-0) on behalf of a late match of the 19th day which could not be played because of the fog. It was first Kévin Gameiro who opened the scoring just before the break, on a nice through pass from Jean-Eudes Aholou. The Clermontois Cédric Hountondji then deflected a strike from Bellegarde (77th) to offer the second goal to the Strasbourg.

With five wins in their last six games (for a defeat, against Marseille on December 12), Julien Stéphan’s players are now in fourth place in the standings, just two points behind Marseille. It has been almost fifteen years since the Alsatians reached such a position in Ligue 1.

Clermont, for its part, again showed its offensive limits in this match (a shot on target) and has still not found the net in 2022. Pascal Gastien’s players have won only one of their eleven last Ligue 1 matches (2 draws, 8 losses) and are currently 17th.

Lille surfs on its dynamics

Lille continues its unbeaten run. Jocelyn Gourvennec’s players showed no mercy at home against Lorient (3-1), thanks to a first professional goal from Isaac Lihadji (10th), then Moritz Jenz (19th, csc) and Reinildo Mandava (30th). ). Losc have not lost since ten games (six wins, four draws) and their defeat in Paris on October 29 (1-2). This new victory allows Lille to move up to only two points from European places and to consolidate their place in the middle of the classification (9th), ahead of Nantes.

For its part, Lorient, which had however started the game well, is struggling painfully for its survival in Ligue 1 and has not won a single match since September 22, at home against Nice (1-0).

Deprived of their coach Olivier Dall’Oglio who tested positive for Covid-19, the Montpellier residents did not manage to find the solution at home against Troyes and lost 1 goal to 0. A bad deal for the MHSC, which had the opportunity to return to equal points with Stade Rennais (5th, 38 points). They drop to 9th place and three points off the European seats.

But the misfortune of some is the happiness of others. Thanks to this success, Troyes finally gets some air and signs a second victory in ten games. Above all, the Trojans climb to fifteenth place, three points behind the first barrage.