French Presidency of the Council of the European Union: what to remember from Emmanuel Macron’s speech to Parliament

He set the tone for the French presidency of the Council of the European Union. In a speech delivered to MEPs gathered in Strasbourg on Wednesday January 19, Emmanuel Macron called on Europeans to be “bold” so that the 27 assert themselves as “a power for the future”. “Faced with the tyranny of anecdote and divisions between Europeans, we have to rediscover the sense of unity. (…) We have the strength, we have the means”, hammered the head of the State, at the head of the Council of the EU for six months. Franceinfo looks back on the highlights of its three-hour stay in the European hemicycle.

Emmanuel Macron was heckled upon his arrival

The arrival of the French president inside the building was a bit hectic. As he marched through the lobby of Parliament, environmental activists chanted: “Climate, climate, Macron guilty!” as these videos show. The activists were quickly led out of Parliament.

Emmanuel Macron booed when he arrives at the European Parliament pic.twitter.com/gtMv2pLRzu

Just before the arrival of the President @EmmanuelMacron, 4 people sang “Climate, Climate, Macron Guilty! » for 2 minutes. They were quickly exfiltrated by security @BFMTV pic.twitter.com/OFnEMSNTbR

Environmental activists had already, earlier in the morning, carried out an action near Parliament. They had soaked portraits of Emmanuel Macron in fuel oil, to denounce his lack of action in favor of the climate.

Actions by climate activists near the European Parliament on the occasion of Emmanuel’s visit #Macron. Portraits taken down in recent years are oiled. #strasbourg pic.twitter.com/v8VZ9VrPfi

He proposed “a new security order” against Russia

Before listening to MEPs and answering their questions, Emmanuel Macron gave a speech lasting around thirty minutes. He notably pleaded for “a frank and demanding dialogue” with Moscow. At the end of 2021, the Kremlin massed armor and military equipment on the Ukrainian border, raising fears of an invasion.

“These next few weeks should lead us to bring about a European proposal building a new order of security and stability. We must build it between Europeans, then share it with our allies within the framework of NATO, then then propose it to the negotiation with Russia, he affirmed. The security of our continent requires a strategic rearmament of our Europe as a power of peace and balance, in particular in the dialogue with Russia.” 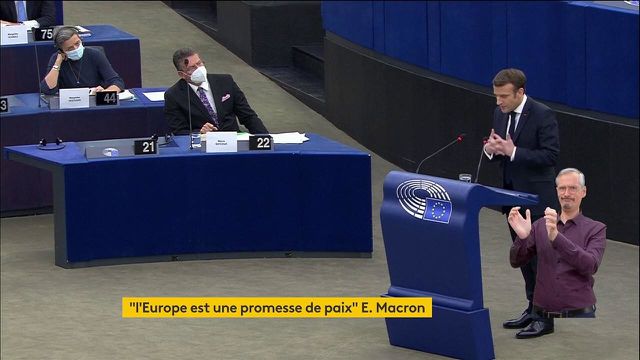 “What we need to build is a European order based on principles and rules to which we sided and which we acted not against, nor without, but with Russia thirty years ago” , he continued. The Head of State pledged to continue to seek “a political solution to the conflict in Ukraine” within the framework of the Normandy format, which brings together Paris, Berlin, Moscow and Kiev.

Emmanuel Macron also recalled that “the French presidency will carry out a reform of the Schengen area”, already announced in December. “We must protect our external borders, including by developing a government rapid intervention force,” he explained.

He called for an “update” of the Charter of Fundamental Rights

Emmanuel Macron insisted on the need to defend the rule of law, which “is our treasure” and “everywhere it is a question of reconquering the peoples who have moved away from it”. He affirmed that “neither the return to nationalism, nor the dissolution of our identities will be the answers to this world which is coming”, marked by “the return of the tragedy of History”.

To strengthen this rule of law, Emmanuel Macron wanted the Charter of Fundamental Rights of the European Union to be “updated to be more explicit on the recognition of the right to abortion or on the protection of the environment”. He spoke these words under the gaze of the Maltese conservative Roberta Metsola, the new president of Parliament and openly opposed to the right to abortion. 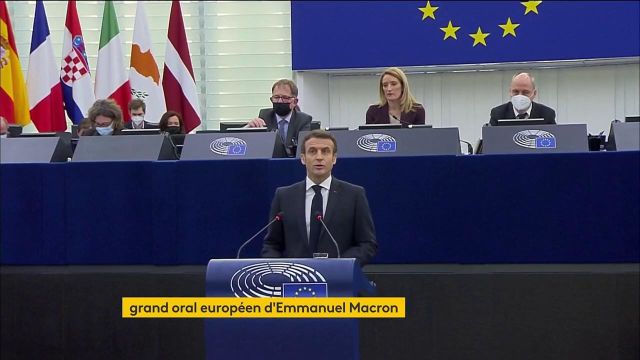 He called the climate the EU’s ‘first challenge’

“Europe is the place where, in Paris, in 2015, a universal climate awareness arose, recalled Emmanuel Macron during his speech. It is the continent which, with the objective of neutrality in 2050, has given the first the most ambitious goals on the planet. Now we have to move from intention to action.” Believing that the climate was the “first of the challenges” of the EU, the Head of State called for “transforming our industries, investing in the technologies of the future, whether batteries or hydrogen .”

He reaffirmed his economic ambitions

Emmanuel Macron also recalled the objectives of the French Presidency of the Council of the EU in terms of the economy and labor law. “I want it to take strong action to offer quality, qualified, better paid jobs to all, with decent minimum wages for all, he explained. The progress I have just mentioned is not simply words or promises, these are texts that will arrive in our hands in the coming weeks and that I wish to see completed during this semester.” 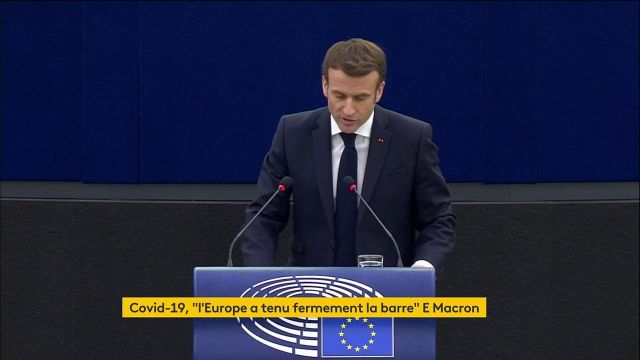 The Head of State also said he wanted to “build a real single digital market to create European champions” in this sector. To take the turn of the “digital revolution”, the EU must nevertheless “supervise the actors” such as the Gafam, he recalled. 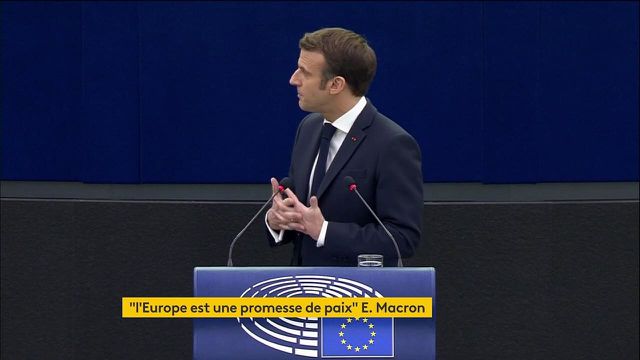 The president promised to carry, with Germany, “the right of legislative initiative for the European Parliament”, if this reform was recommended by the conference on the future of Europe.” For the moment, the Parliament cannot initiate laws, everything must come from the European Commission, explains Sophie Pornschlegel, political analyst specializing in the EU at the think tank European Policy Center in Brussels, interviewed by franceinfo. to propose laws. This would correspond to a strengthening of the institution.” 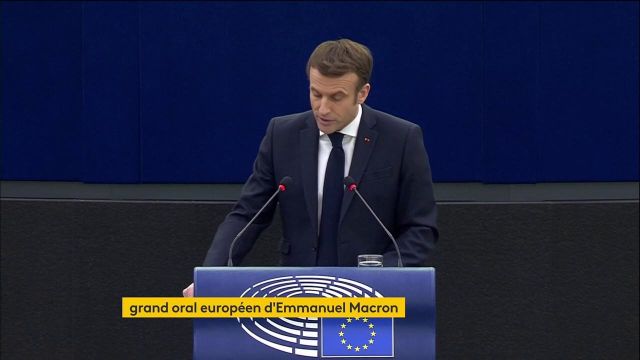 The presidential campaign was invited to the European Parliament

At the end of Emmanuel Macron’s speech, the various representatives of the parliamentary groups took the floor. French MEPs from the opposition took the opportunity to sharply criticize the head of state. “You are following another path, that of a climaticide alliance with Poland and Hungary, asserted Yannick Jadot, the only presidential candidate in France elected to the European Parliament. You are a climato-arranger.” “Our Europe will never be yours,” continued the environmentalist, which earned him a point of order. 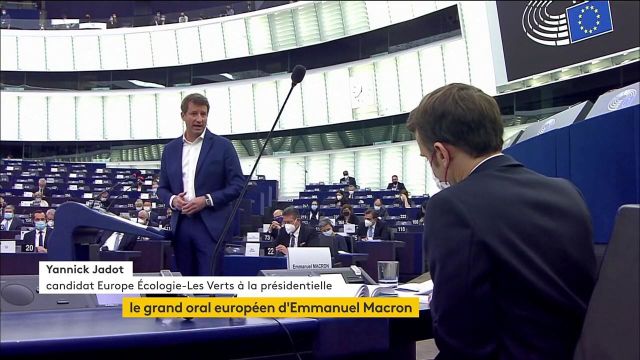 Another French MEP to intervene, Jordan Bardella focused his criticism on immigration, which has become a central theme in the French countryside. The acting president of the National Rally said European nations must “neither disappear, nor be replaced, nor be overwhelmed” by immigration.

Speaking after the far-right European elected representative, MEP Manon Aubry portrayed the Head of State as “Doctor Emmanuel who made a lot of promises, and Mister Macron who has nothing to do with the ‘climate emergency’. “The French presidency [de l’UE] should not be an electoral stepping stone”, insisted the elected official of La France insoumise, while the outgoing president has not yet declared himself a candidate for re-election. 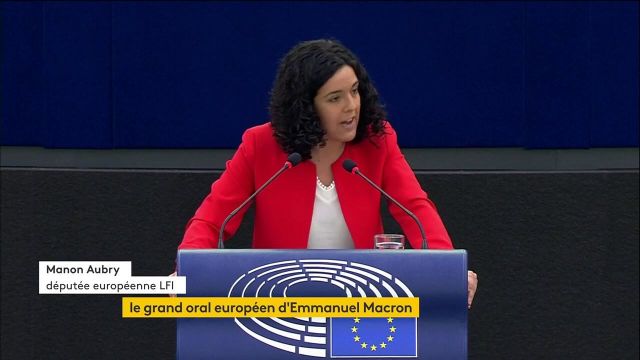