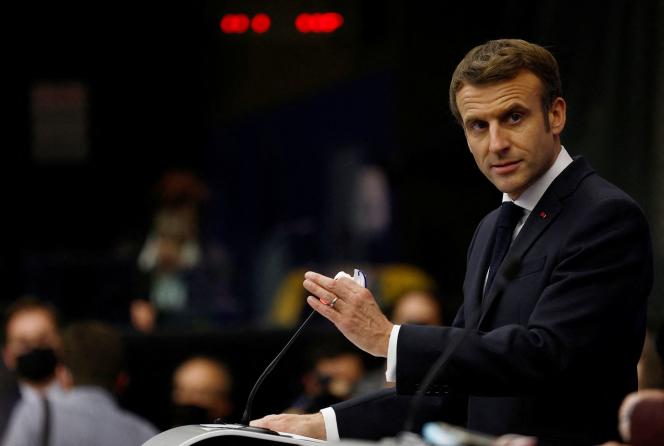 Emmanuel Macron at the European Parliament, in Strasbourg, on January 19, 2022. GONZALO FUENTES / AFP

“I hope that we can update the Charter of Fundamental Rights [de l’Union européenne], in particular to be more explicit on (…) the recognition of the right to abortion”, declared Emmanuel Macron, Wednesday January 19, when he came to present the priorities of the French Presidency of the Council of the European Union before MEPs meeting in Strasbourg. The day before, the President of the Republic had not planned to make such an announcement. But the controversy aroused by the election, Tuesday, January 18, of Roberta Metsola at the head of the European Parliament, undoubtedly convinced him to take this initiative.

Despite her anti-abortion stance, the Maltese, from the conservative ranks of the European People’s Party, was elected with the support of the Social Democrats (S&D), the Renew liberals – of which the Macronists constitute the main delegation – and Eurosceptic conservatives of ECR. Emmanuel Macron knows that his camp, even if he almost voted as one man for Roberta Metsola, is not comfortable with this affair. He expected to be challenged on this subject by the radical left or the Greens in the Hemicycle. The Head of State has decided not to show up empty-handed.

Read also Article reserved for our subscribers Roberta Metsola, an anti-abortion Maltese, takes over the presidency of the European Parliament

“Our Europe will never be the one that yields in this forum on the right to abortion (…) with the support of the far right”, did not fail to launch the environmental candidate for the presidential election Yannick Jadot. , also an MEP. “It is not enough to include the right to abortion in the Charter of Fundamental Rights. It is still necessary to defend it, to accept the extension of its deadline in France and not to make a pact with States like Poland which destroy this fundamental right to dispose of our body, ”added Manon Aubry (La France insoumise).

“A way to restore the image”

Emmanuel Macron’s initiative clearly did not convince. “It’s more of a political display. Beyond words, in practice, [amender la Charte des droits fondamentaux], it is difficult, if not impossible to implement”, judges the social democrat Sylvie Guillaume, who did not vote for Roberta Metsola. The revision of the Charter of Fundamental Rights can only be done with the unanimous agreement of the Twenty-Seven. And, at this stage, it is hard to see Warsaw supporting the introduction of the right to abortion in this text.

Read also Article reserved for our subscribers One year after the virtual ban on abortion in Poland, “abortion without borders” is thriving

In the case of Malta, this seems even less likely: a protocol annexed to the treaty of accession of the island to the EU guarantees to him that the European legislation, current and future, will not be able to modify the national law on the IVG – illegal – nor affect its application. “The revision of the Charter of Fundamental Rights presupposes a change in the treaties”, confirms the Elysée, which hopes that the Conference on the future of Europe will make it possible to move forward. Emmanuel Macron’s proposal, “it’s a way of restoring the image of women’s rights at a lower cost… And during this time, he remains silent on the ban on abortion in Poland”, contrasts Manon Aubrey.

You have 31.78% of this article left to read. The following is for subscribers only.