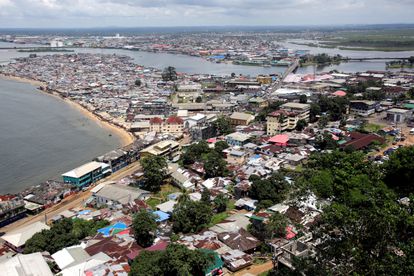 View of the city of Monrovia in an image taken on October 12, 2017.THIERRY GOUEGNON (REUTERS)

At least 29 people, including 11 minors and a pregnant woman, died this Wednesday night in Monrovia, the capital of Liberia, after a stampede during a religious celebration that took place on a soccer field, according to the police spokesman. Liberian, Moses Carter, who explained that the events occurred after an attempted robbery. The assailants were armed with knives, causing panic among those gathered. The balance of victims is provisional, as there are more people in critical condition admitted to the Redemption hospital.

The two-day religious gathering, attended by thousands of people, was held in the popular New Kru neighborhood in eastern Monrovia and was led by the country’s highly-regarded young preacher Abraham Kromah, a leading of a Protestant church known as More Grace. At the end of it, around 9:00 p.m. on Wednesday (local time; 10:00 p.m. peninsular time), people armed with knives tried to block the exit and demand that the faithful who left the sports venue hand over their personal effects, causing the stampede. A suspected assailant has been arrested, Liberian police confirmed.

“While those who had made their offering were leaving the place, a very loud noise was heard coming from the entrance,” Emanuel Gray, who was inside the football field at the time, told the France Press news agency, “when we got there we found numerous people lying on the ground, dead, and others who were fighting for their lives”. In statements reported in the local press, a witness refers to the assailants as zogos, a pejorative term used in Liberia to refer to homeless people who commit crimes to survive.

“Today is a sad day for the country,” said the Liberian Government’s Information Minister, Jalawah Tonpo, through public radio after confirming the figure of 29 dead. The president, former soccer player George Weah, plans to go this Thursday to the aforementioned Redemption hospital to find out the health status of the injured, as well as to the football field of the D. Tweh Memorial High School, where the stampede occurred.

Weah, who decreed three days of national mourning and that the flag fly at half-staff, ordered the Police to “carry out a large-scale investigation to determine whether or not there is criminal guilt,” according to the Liberian Presidency through a statement. “The president has conveyed his deepest condolences to the families of those affected and has thanked all those who provided help to the victims,” adds the press release.

Liberia, with some five million inhabitants, suffered two civil wars between 1989 and 2003, and was also one of the three states most affected by the 2014 Ebola epidemic, which caused 4,800 deaths in the country. George Weah succeeded President Ellen Johnson-Sirleaf, Nobel Peace Prize winner in 2011, after winning the 2017 elections.