The West redoubles diplomatic efforts to avoid conflict in Ukraine: “The risk of conflict is real”

Diplomatic efforts to prevent a new conflict in Ukraine are multiplying. Dissuading Russia from an invasion has become the main objective of Western powers, which are trying to reduce tension with continuous trips to the two warring countries, calls between senior officials and the convening of different formats of talks between the affected parties.

“The risk of a conflict is real,” NATO Secretary General Jens Stoltenberg stressed in Berlin on Tuesday. After meeting with the German chancellor, Olaf Scholz, the head of the Alliance sent several messages to Moscow, all along the lines of asking it to reconsider its position and reminding it of the consequences that a new attack against Ukraine would have. Stoltenberg announced that he has reconvened the members of the NATO-Russia Council (NRC) for new talks. “The tension is very high and that is why dialogue is especially important. We must do everything possible to reach a political solution,” he added. 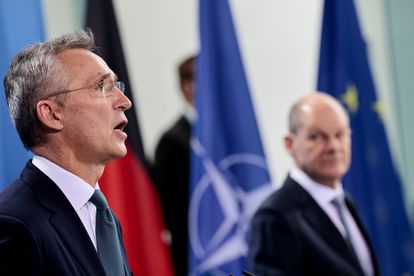 Stoltenberg and Scholz at a joint press conference this Tuesday in Berlin. HANNIBAL HANSCHKE (REUTERS)

As part of the diplomatic offensive, US Secretary of State Antony Blinken began a trip on Tuesday with a stopover in Kiev, Berlin and Geneva. In the Swiss city, he is scheduled to meet on Friday with his Russian counterpart, Foreign Minister Sergey Lavrov. The message that it will transmit, according to US government sources, is not far from what Washington has warned for weeks: that it is necessary to ensure “a diplomatic response.” What has changed is the context: the fear of Russia invading Ukraine is growing.

“We are at a time when Russia could launch an attack on Ukraine at any time,” say sources from the US Administration. “The United States does not want conflict, it wants peace,” they add, although they insist that the ball is in the Kremlin’s court. “We have been very clear, significant progress on the diplomatic track can only occur in an environment of de-escalation, but we have seen the opposite from Russia,” the sources consulted conclude.

The de-escalation, for the United States and its allies, consists of Putin reducing military pressure on the border with Ukraine, where it is estimated that he has placed around 100,000 soldiers. But not only that has happened. The US accuses the Kremlin of cyberattack operations and a plot to fake an aggression against its troops that will serve as a pretext to intervene in the former Soviet republic.

Blinken spoke with Lavrov on Tuesday, in a conversation in which the American stressed the United States’ “unwavering” commitment to Ukraine’s sovereignty. The meeting that both delegations held last week in Geneva also produced few results. In Kiev, Blinken will meet on Wednesday with Ukrainian President Volodymyr Zelensky and his Foreign Minister Dmytro Kuleba. The next day he will meet in Berlin with his German counterpart, Annalena Baerbock, to coordinate any response “if Russia decides to raise the tension.” The Spanish Foreign Minister, José Manuel Albares, stressed this Tuesday in Washington “the commitment of Spain and its allies” to the sovereignty and integrity of Ukraine “including Crimea”, a peninsula that Russia invaded in 2014.

The meeting of NATO members with representatives of the Russian Government in Brussels ended last week with very conflicting positions. The Alliance considers that Putin’s demands are unaffordable. Then, like this Tuesday in Berlin, Stoltenberg recalled what Europe is at stake in the face of the Russian demand to prevent new states from becoming part of NATO: “We are at a defining moment for European security.”

The new talks that Stoltenberg raises will allow “addressing the concerns [de los países de la OTAN], but also listen to those of Russia and try to find a way out of the crisis,” he said in a brief press conference with Scholz. The Alliance reaches out to the Kremlin to negotiate a way out, but the Western position remains very clear: “Any new escalation in Ukraine will have a high price for Russia,” warned the NATO chief. Stoltenberg defended the right of the former Soviet republic to defend itself and recalled that NATO allies are “united” and will act in concert in the event of aggression. “There will be very high costs, both political and economic,” the foreign minister stressed.

Baptism of the German minister

Germany has spared no effort to mediate the crisis. At the same time that Scholz received Stoltenberg in Berlin, Foreign Minister Annalena Baerbock met in Moscow with her Russian counterpart in a meeting that the German press has described as a true diplomatic baptism for green politics. The veteran Lavrov, who last year held a very tense press conference in Moscow with the head of European diplomacy, Josep Borrell, after which Russia also expelled several Western diplomats, maintained a calm and not too acid tone with Baerbock. 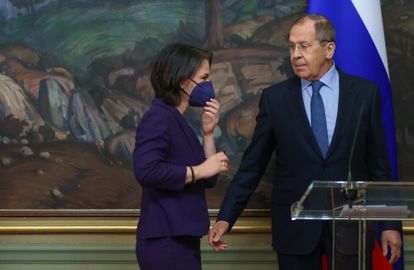 Baerbock takes a harder line on Russia than that advocated by the Social Democrats with whom he governs. The controversial Nord Stream 2 gas pipeline is a good example of this. The minister was much more forceful than Scholz when it came to reminding Russia that its start-up will be subject to respect for Ukraine’s borders. Last month, the chancellor still referred to this infrastructure – which will transport Russian gas directly to Germany under the Baltic Sea and without going through Ukraine and whose certification is paralyzed for not complying with European regulatory procedures – as “a private economic project”, minimizing its geopolitical importance.

Stoltenberg also referred to the gas pipeline and European energy policy this Tuesday in Berlin. “There is no common position among NATO members,” he assured, but at the same time he encouraged Europe “to diversify its energy sources,” in clear reference to its dependence on Russian gas. The reasons for doing so are climatic in nature, but also “security”. The German Greens leader also warned Lavrov that if Russia uses energy as a weapon there will be “consequences” that may include the controversial Nord Stream 2 gas pipeline.

Scholz reaffirmed on Tuesday the German refusal to supply weapons to Ukraine. The chancellor recalled that Germany “years ago” made the decision not to export weapons to conflict zones and that neither did his predecessor, Angela Merkel, consider changing that rule. Stoltenberg recalled that other NATO members have different views on the issue, but avoided commenting. Both politicians reiterated that Ukraine has their support. Political in the case of Germany and defense in the case of NATO. “We support them with training and improving the capabilities of their navy,” Stoltenberg said.

The German Foreign Minister warned Lavrov in Moscow that the time for diplomatic talks is running out and that both Germany and the European Union will be forced to take action against Russia in the face of any threat to EU rules, including those of human rights. Even if that comes at an economic cost, Baerbock said after a closely watched meeting to discuss the future relationship of the new German government and the Kremlin after the Merkel era.

“In recent weeks, more than 100,000 Russian soldiers with tanks and weapons have gathered near Ukraine for no understandable reason, and it’s hard not to see that as a threat,” Baerbock said grimly alongside Lavrov at a news conference. in which he also mentioned the imprisoned opponent Alexei Navalny and the attacks on Russian civil society with the liquidation of the Memorial organization.

“We cannot accept demands on our armed forces on our own territory,” stressed Lavrov, who pointed out that military maneuvers and training are something common in all countries. “We are not threatening anyone, but we are listening to threats against us,” he concluded.