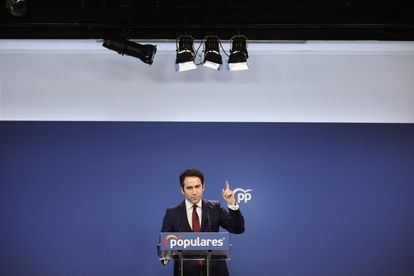 The PP insists on sowing suspicion about the distribution of European funds and relating them to corruption despite the fact that, until now, Brussels has ignored their complaints. The popular ones maintain that the distribution of aid is unequal depending on political color – although four of the six most benefited communities are governed by the PP – and they assure that they will continue trying to get the community institutions to take action on the matter. In parallel, the main opposition party launches a parliamentary offensive and has registered the request for the appearance of the 22 government ministers to explain “under what criteria they have made the distribution”, as announced by the PP spokeswoman in Congress, Cuca Gamarra.

The general secretary of the PP, Teodoro García Egea, criticized this Wednesday on TVE that the distribution of European aid is discretionary and harms the autonomies governed by the PP. “It is evident that the PSOE has established a criterion: those territories where the PSOE governs, we adjudicate, and those criteria where the PSOE does not govern, we punish. That is the objective criterion that currently operates with European funds”, defended the number two of the popular “What cannot be is that this becomes a PSOE fund and not a Spanish fund.”

The PP has launched a battle of funds against the Government on the basis that these are going to be managed to a large extent by the autonomous communities. Until now, the Executive has distributed 11,246 million euros of the 2021 budget year to the autonomies through agreements of the Council of Ministers and sectoral conferences, subsidies and agreements. In other words, the communities are going to manage 46% of the 24,198 million budgeted in 2021 in the Recovery Plan and 59% of the 19,036 million received from the European Commission in 2021. The Executive explains that the distribution of the funds has been carried out based on “permanent dialogue with the communities”, for which 59 sectoral conferences have been held in which the initiatives of the plan have been addressed.

Four of the six communities most benefited by the funds to date are governed by the PP: Andalusia, the first; Madrid, the third [después de Cataluña]; Castile and Leon [quinta después de la Comunidad Valenciana] and Galicia. The Government has assigned to Madrid, which has been the first to take the distribution of funds to court, 1,213 million euros, which represents 12% of all the funds of the plan assigned to the communities.

Despite this, the PP insists on its offensive and on relating the distribution to the possibility of corruption. The national leadership is going to inform the EU of any anomaly it detects ―with complaints to the Commission, led by the popular Ursula Von der Leyen― although for the moment Brussels is turning a deaf ear to these complaints, after the Executive of Pedro Sánchez has mobilized to neutralize criticism in the European capital. Spain is the only EU country in which a dispute has broken out between regional authorities and the central government over European funds.

The PP hints at the risk of corruption in the management of these aids, which are subject to exhaustive control by the European authorities. “We have already experienced this”, pointed out the general secretary of the popular in reference to the case of the ERE, in which the Andalusian Government, then in the hands of the socialists, was investigated for a payment mechanism for companies in crisis and that the courts have found to be fraudulent. “Last week a councilor from the Junta de Andalucía was imprisoned for stealing money from the unemployed, from the ERE [expedientes de regulación de empleo], and use it discretionally. Therefore, the same thing that happened with the ERE, which was also European aid to developing regions and ended up in the pocket of a few, is what cannot happen with European funds”. Pablo Casado’s party calls for an independent agency to evaluate the distribution criteria.

The Government accuses the main opposition party of disloyalty because it sows doubts in Europe about the management of the aid, which could hinder the arrival of the funds in Spain, and the PP defends itself by criticizing the Minister of Consumption. “The one who has sold a bad image of Spain is [Alberto] Garzón speaking ill of Spanish meat. That is the only serious matter that I have seen, unacceptable. Every time a member of the PP is accused of speaking ill of Spain, they should use Alberto Garzón’s statements”, García Egea defended. “To speak ill of the image of Spain, this Government does not win anyone.”

Morelos: Terrifying! They burn the body of a person in the streets of Cuernavaca