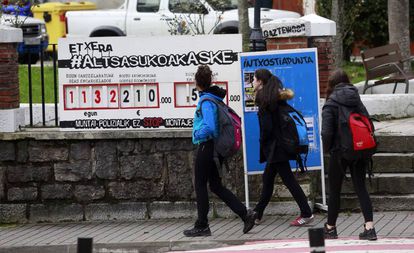 Some young women walk in December 2019 in front of the counter of days in prison for the prisoners of Alsasua.Javier Hernández

The European Court of Human Rights (ECHR) has not admitted for processing the appeal presented by those convicted by the Spanish justice for the Alsasua case, as reported this Wednesday Iñaki Abad, one of the eight young people who were found guilty. In October 2019, the Supreme Court lowered the sentence of the eight convicted of the attacks against a lieutenant and a sergeant of the Civil Guard and their girlfriends that occurred in October 2016 in a bar in Alsasua, a municipality of some 7,400 inhabitants of Navarra . The National High Court had sentenced them between 2 and 13 years in prison for crimes of attacking law enforcement officers, injuries, public disorder and threats, but all resorted to the Supreme Court and the high court partially upheld the appeal and reduced the sentences. in almost five years for some of them. After the Supreme Court ruling, the range of sentences was between a year and a half and nine and a half years in prison, but when the judicial channels in Spain were exhausted, the convicts chose to resort to the ECHR.

“Faced with the helplessness of all judicial institutions, there remains a society that has understood it perfectly, despite losing at the ECHR, we will always continue to denounce it,” Iñaki Abad said on his personal Twitter account.

Finally, the European Court of Human Rights does NOT admit our claim for processing. Faced with the abandonment of all judicial institutions, there remains a society that has understood it perfectly. Despite losing in #TEDH, we will continue denouncing it always.
End of story. pic.twitter.com/vV5OLUiOHE

It was in November 2020 when the relatives of the convicted, included in the Altsasu Gurasoak platform, announced that they would file an appeal before the Strasbourg court. In the presentation of the same, they indicated that “no body of the Spanish judicial system with powers to do so has shown the will to stop this set-up, demonstrating serious democratic deficiencies and violating the most basic fundamental rights.” However, the Strasbourg court has declared his claim inadmissible, also cutting off this path. Although the inadmissibility decision has now become known (which Strasbourg usually notifies only to the interested parties), it was taken at the end of September last year by a committee of three judges who examined the total of seven appeals filed around to this case, reports Silvia Ayuso from Paris.

The Supreme Court considered in October 2019 that there was evidence to maintain the convictions for crimes of attacking law enforcement officers, injuries, public disorder and threats, except for two convictions for injuries imposed on Aratz Urrizola and another for the same crime of the defendant Iñaki Abbot.

The court lowered the sentence for Urrizola and Abad (who later filed a joint lawsuit with the ECHR) by withdrawing the aggravating circumstance of discrimination and abuse of superiority in the case of the crime of attacking authority. It also suppressed two accused of the crimes of injury due to lack of evidence, although two magistrates —Vicente Magro, who was the rapporteur for the sentence, and Antonio del Moral— signed a dissenting vote in favor of having maintained the aggravating circumstance of discrimination. The Criminal Chamber of the high court did ratify the civil responsibilities for the psychological and moral damage caused to the victims, as well as for the physical injuries, although it did not endorse the terrorism crimes that did appear in the indictments of the Prosecutor’s Office.