Perception of insecurity in Mexico increases in December, says Inegi

According to the quarterly survey released by the National Institute of Statistics and Geography (Inegi), the perception of insecurity among Mexicans increased from 64.5% in September to 65.8% in December 2021.

This means that 65.8% of the population aged 18 and over perceives that living in their city is unsafe., an increase of 1.3 percentage points compared to the result of three months ago, indicated the results of the National Survey of Urban Public Safety. 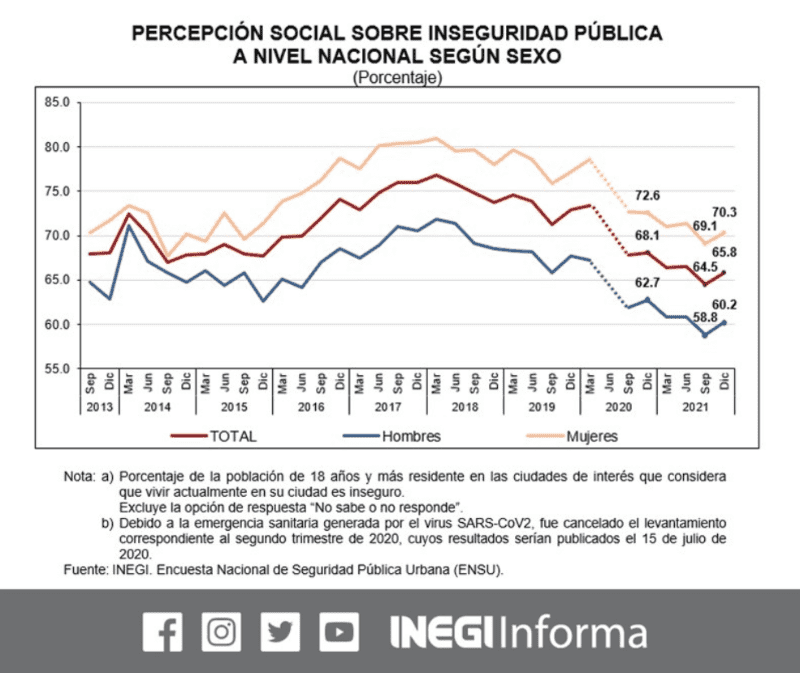 “In December 2021, 65.8% of the population aged 18 and over considered that it is unsafe to live in their city. This percentage represents a statistically significant change in relation to the percentages registered in December 2020 and September 2021, which were 68.1 and 64.5%, respectively,” Inegi said in the statement.

In the fourth quarter of the year, the perception of insecurity continued to be higher in the case of women with 70.3%, while in men it was 60.2 percent.

Regarding the perception of insecurity in specific physical spaces, in December 2021, 76.9% of the population said they felt insecure at ATMs located on public roads, 70.2% on public transport, 62. 4% in the bank and 57.9% in the streets that you usually use.

During the fourth quarter of 2021, the percentage of the population that mentioned having seen or heard criminal or antisocial behavior in the surroundings of their home was: alcohol consumption in the streets (61.7%), robbery or assault (55.7%), vandalism in homes or businesses (42.7 percent).

Mexico has recorded the most violent periods in its history in the first two years of the mandate of President Andrés Manuel López Obrador (AMLO), with 34 thousand 690 murder victims in 2019 and 34 thousand 554 in 2020.

According to preliminary data from the federal government released in early January, Mexico closed 2021 with 33,410 intentional homicides, a reduction of 4.1% compared to 34,554 murders in 2020.