In Rennes, the removal of the Vilaine car park still divides the population

We could almost make two teams. In red chasuble, opponents of the removal of the Vilaine car park. To simplify, there are old people, shopkeepers from the city center and inhabitants of the metropolis who do not live in Rennes and want to come there by car. In green chasuble, those who plead for the complete transformation of the place to make it a space for strolling at the edge of the water. The green team is much younger, also more urban and uses less cars. The day after the announcement of the demolition of the famous car park to reveal the charms of the Vilaine, we improvised a little argument match between the two camps. Notebook in hand, we walked the slab of asphalt to glean everyone’s opinions. Clearly, two camps oppose each other.

Jacqueline, Patrick and Dom are getting ready to leave Rennes. These residents of Pacé parked in the Vilaine car park to shop on this cold Tuesday in January. “Not everyone can come by metro. This car park is very practical, it makes me feel safe. It’s been there for so long, why delete it? asks Jacqueline. Built in 1960 at a time when France thought of everything for the car, the parking area offers 250 paying spaces close to République and the city center of Rennes. Mentioned for years, its deletion had been recorded by the candidate Nathalie Appéré. Re-elected mayor for a second term, the socialist had admitted “not knowing what to do” in the Vilaine car park, before asking a citizen jury to take up the question. 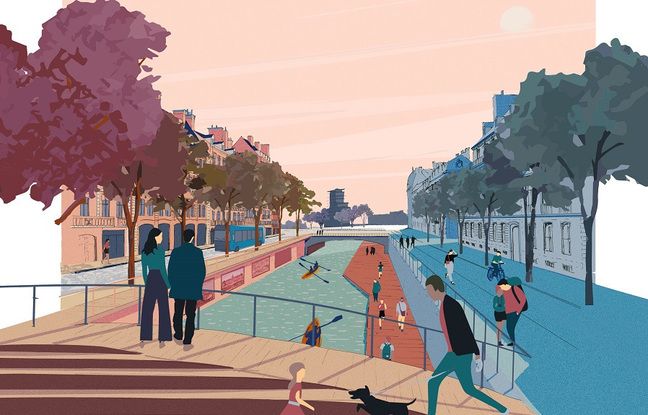 In Rennes, the citizen jury opted for the demolition of the Vilaine car park in order to discover the river. – Open city/Atelier Jacqueline Osty and associates

The option to discover the Vilaine selected

After months of reflection, the 30 members of the jury presented two projects: one discovering the Vilaine, with large pontoons allowing you to walk along the water’s edge, and trees planted on the surface. The other opting for a large wooded park, leaving the watercourse hidden underground. It is finally the first option which was retained Monday evening in the municipal council, not without debate.

“The Vilaine at this place is a miserable river. The water there is dark. Eyes will quickly turn away once the slab is removed, ”said majority elected Honoré Puil, who was rather in favor of the surface park project. “I’ve been here for twenty-three years and I’ve heard about it for twenty-three years,” slips the owner of the Play it music store located on the quays. He regrets that this choice “is a political act”. “Today, this car park brings a lot of people. Tomorrow, when we have discovered the Vilaine, who will come there? We don’t make a city just for those who live there, ”tackles the trader.

On the quay opposite, the owners of the La Bonbonnière store have the same point of view. Their clientele being mostly elderly, they come less “because of the removal of car parks”. “The hunt for the car does not solve everything. And then when we’re going to break everything, the docks will be ugly. Will it revitalize the neighborhood? I’m skeptical,” said the manager. Her husband is even more radical. “City dwellers, on weekends, if they want some fresh air, they go to the countryside, not to the banks of the Vilaine. We spent millions to build this parking lot and we’re going to spend millions to tear it down. It is nonsense”. The entire site is valued at 17 million euros, including two to three million for demolition.

Little survey from Tuesday to #Rennes. The day after the decision to demolish the Vilaine car park to rediscover the river, we wanted to have your opinion on this file. What is your preference ?

Here are the visuals of the project for information: https://t.co/3MxMFHOWHd

In the shop, an elderly lady disputes. Contrary to appearances, she is not on the red team. “This car park, I find it very ugly. I will be delighted when he disappears. It’s ugly, we can do much better, ”she slips with confidence. She is not the only one to ask for the erasure of this space confiscated by cars. “It would be much prettier and much calmer if there weren’t all these cars. I really like the idea of ​​showing the Vilaine rather than a park. After all, the water was there before,” slips Aziliz, a 30-year-old who lives in Rennes. By his side, Meghann has the same look. “The best thing would be if we could walk to the mall. It’s great what they did there. Greenery is good, because we lack it in the city center ”. 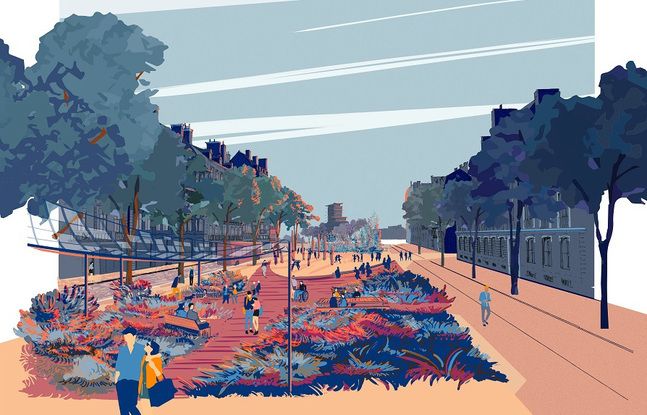 The second scenario of transforming the Vilaine car park into a large park was ruled out by the Rennes city council. – Open city/Atelier Jacqueline Osty and associates

The redevelopment of the Mitterrand mall is often cited as an example of the benefit of removing a car park. Since this choice, cafes and terraces have flourished in the shade of trees and sports facilities are taken by storm. The place has become a real place of life. Eric agrees. As he hangs his bike on the arches of the Place de la République, the one who has lived in Rennes “for fifty years” applauds the decision of the municipality. “You need a place where people can settle down, stay, walk around like in the mall. The car has nothing to do there, ”slips the cyclist. The latter, however, would have preferred that the Vilaine be left hidden. “When you see what the floating gardens look like on the other side of République, I find it a bit anecdotal”.

Each team has its arguments. The end of the competition is expected in 2027.