In Brazil, hundreds of police on the offensive in a district of Rio 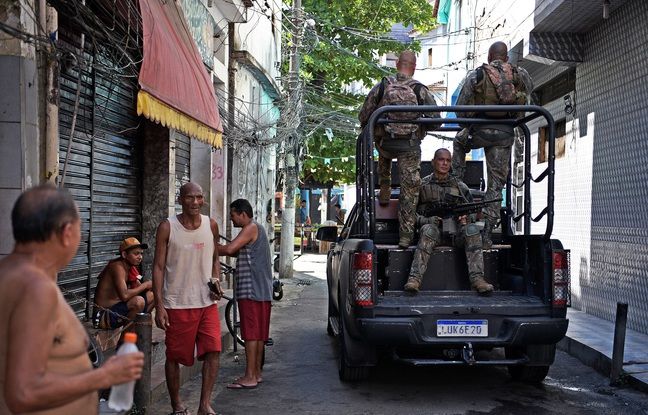 About 1,200 heavily armed police officers have been mobilized by authorities in Rio de Janeiro, Brazil, in a major offensive against drug traffickers. Their targets: favelas, starting with that of Jacarezinho. This district, north of Rio, near the international airport, was not chosen at random: in May, a police raid killed 28 people there. The UN had called for an “impartial investigation” into accusations of summary executions.

Jacarezinho, where approximately 90,000 people live according to community leaders, is considered one of the strongholds of the “Comando Vermelho” (“Red Commando”), one of the main gangs in Brazil. According to AFP journalists on the spot, the streets of Jacarezinho were almost deserted and most shops closed, while groups of police officers in fatigues or black uniforms patrolled with assault rifles, under an overwhelming heat. .

“It is an intervention in a conflict zone so that we can implement a project of the government of the State of Rio. Security is the first step,” Major Ivan Blaz, spokesman for the military police, told AFP. “It’s the next steps that will make the difference: the arrival of social, health and education services, the creation of jobs”, he added, stressing that the situation in the favela was “calm since the start of the operation, without a shootout between gangs and law enforcement.

The operation was organized as part of the “Cidade Integrada” (“Integrated City”) program, a “major project for the transformation of favelas”, according to the governor of the state of Rio, Claudio Castro, of the Liberal Party, formation of far-right President Jair Bolsonaro. Similar operations should take place in the coming months in other neighborhoods of this city of 6.7 million inhabitants, nearly a quarter of whom live in favelas, poor neighborhoods where organized crime reigns.

But this program, considered by some as a simple announcement effect at the start of the election year, is already the subject of criticism from the opposition. “Dispensaries are closed, vaccination and anti-Covid tests are suspended in Jacarezinho, where this military occupation is taking place at a critical moment in the pandemic,” tweeted Renata Souza, regional deputy for the state of Rio for the Party. socialism and freedom (PSOL). “This logic of militarily occupying a territory to integrate it is wrong! This totally violates the rights of the inhabitants! “, she added.

Many security experts have for years castigated the policy of combating drug trafficking carried out by successive governments, believing that it is based essentially on the violent confrontation of gangs and not on in-depth and more targeted investigations.

Residents are both victims of violence between gangs and the police and between gangs themselves. According to the G1 news site, the authorities plan to install facial recognition cameras in Jacarezinho as part of the “Cidade Integrada” program. This program is to replace the Peacekeeping Police Units (UPP), created in 2008 during the term of ex-governor Sergio Cabral, imprisoned at the end of 2016 for corruption.

With local police officers permanently present in the favelas, the UPP initially reduced violence, but the situation deteriorated over time, in particular due to the serious financial crisis which affected the country. State of Rio after the 2016 Olympics. According to the Network of Security Observatories, a collective of universities and NGOs, “Cidade Integrada renews the formula that failed with the UPP”, with “a military occupation without dialogue with the inhabitants “.