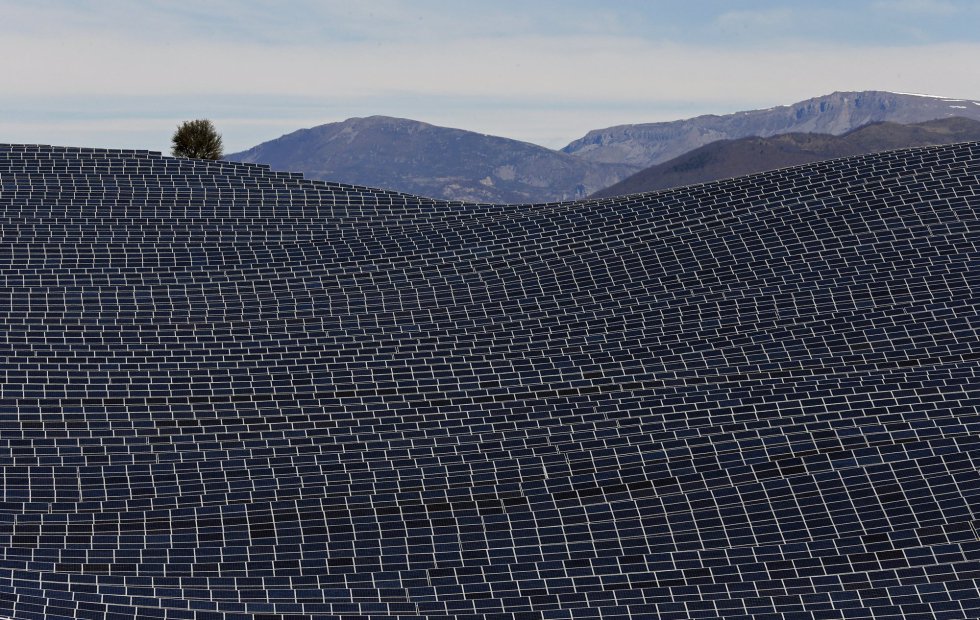 Hard blow to France’s green reputation: it is the only one of the 27 members of the European Union that has not done its homework on renewable energy. In one way or another, all the countries of the EU have met the objectives they had for the share of renewables on total energy consumption for 2020. But, according to the final data released this Wednesday by the European statistical office, Eurostat , the second European economy did not reach the 23% that it had set. It is quite far away —at 19.1%— despite the fact that the covid has made it easier to comply and despite the facilities that the European Commission has put on the table, which a few years ago opened the possibility that the countries will exchange, after payment, the so-called “statistical transfers” to comply, a figure that five States have finally had to resort to in order to reach their objectives, among which the Netherlands stands out. As a whole, the EU has comfortably met the 2020 goal: a level of 20% should be reached and 22% has been reached.

Failure by France could lead in the future to a file by the Commission and some hypothetical sanction. But the Gallic country has decided not to resort to these purchases of quotas from other countries. Y Eurostat data represent a notch in French environmental credibility, questioned by many environmental groups after the country has strongly supported the inclusion of nuclear energy in the so-called green taxonomy, a classification drawn up by the European Commission that distinguishes what is a green bond and what not, and whose objective is to remotely direct community finances towards the ecological transition. Right now, just over 70% of France’s electricity comes from nuclear power plants, making it the European country with the greatest dependence on this technology, which does not emit greenhouse gases but does produce waste that has complicated and expensive administration.

To calculate the 2020 European targets for renewables, not only the electricity sector was taken into account, but also transport and industry, in which the dominance of fossil fuels is still much greater. The EU as a whole had to reach a 20% share of final energy consumption and it has reached 22%, according to data released this Wednesday. Then, each country had its own objective that it had to reach so that the sum of all the members of the EU would help to reach that 20% jointly.

The national goal was set taking into account the starting situation of each State more than a decade ago and their capacities. France was marked that 23% share of renewables, which has failed by four points. Spain, for example, was set at 20% and has managed to reach 21.2%. Germany has reached 19.3% (it should have reached 18%). Sweden was the country with the highest target, 49%, and it has reached 60%. It is followed by Finland, which should have reached 38% and has remained at 43.8%.

The pandemic has been one of the factors that has made the EU as a whole and several countries have managed to comfortably meet these renewable energy targets in 2020. The advance of these clean technologies continued to increase in the electricity sector despite the pandemic, while the sectors with a lower penetration of renewables —transport and industry— reduced their activity considerably due to restrictions to contain the advance of the coronavirus.

Information is the first tool against climate change. Subscribe to it.

To this favorable context has been added an instrument that the European Commission launched a few years ago to make it easier for countries to meet their objectives: the so-called statistical transfers. This compensation tool allows a country that comfortably meets its goals —for example, Denmark— to be able to sell part of its renewable power on paper to another with difficulties —for example, the Netherlands—. The States are not obliged to make public the prices at which they buy and sell this renewable power, but sources familiar with these exchanges place these exchanges in a range of between 10 and 20 euros per MWh. According to the data provided by Eurostat, in 2020 the countries bought around 22.2 million MWh to meet the objectives, with which, taking an average price of 15 euros, the disbursement would exceed 330 million.

Although transfers of this type had already taken place in previous years, the large volume of these operations was in 2020, the year that was taken as a reference to meet the European renewable energy targets. The State that has had to resort to these statistical transfers the most to comply has been the Netherlands, which would have acquired 60% of all transfers in 2020. If an average reference price of 15 euros is taken, this country would have had to disburse more than 200 million euros to reach the 14% share of renewables that had been set.

Belgium, Ireland, Luxembourg and Slovenia have been the other countries that have had to buy this type of statistical transfers to comply. And the big sellers have been Denmark, Sweden, Finland and Estonia. “In the future, Spain could become a seller as well,” says Pablo del Río, a researcher at the CSIC’s Institute of Public Policies and Goods, and an expert in renewables. The advance of solar and wind energy is causing the renewable share to grow in Spain at a good rate, something that could mean that in the coming years the country could sell these transfers to other countries that have more complicated the development of renewables , according to this researcher.

By 2030, the European Commission has proposed reaching a 40% share of renewables. Each member of the EU will have to adapt its energy and climate plans to reach that goal. And, again, Brussels will try to promote this type of instrument such as transfers. “From the point of view of the EU, it is a tool to achieve the objectives of renewables and for the countries it can be one more incentive to install more renewables”, adds Pablo del Río.

What is striking is that France has not finally decided to resort to this instrument and risks possible reprimands from the European institutions and a deterioration of the image of the country that hosted the climate summit in 2015, in which the Agreement of Paris.

The dissemination of these data comes at a time of great tension within the EU due to energy measures. On the last day of 2021, Brussels launched a proposal that includes nuclear energy (as France demands) and also gas (as requested by Germany) among the sources of electricity generation touched with the green wand of the taxonomy. The proposal, still in the consultation phase, has generated harsh criticism from environmental sectors, which reproach the green face wash; and has been censured by various countries, such as Spain – which has made a great commitment to renewables and believes that this initiative “would send the wrong signals for the ecological transition in the EU as a whole” – or Austria, traditionally firmly opposed to nuclear power.

The Commission’s current initiative considers nuclear power plants whose construction permit is issued before 2045 and gas-fired plants in operation that emit less than 100 grams of carbon dioxide (CO₂) per kilowatt hour (KWh) to be at the same level as renewables. or those of new construction, whose permit has been issued before 2030, that emit less than 270 grams of CO₂ per kWh, provided that this energy need cannot be covered with renewable sources and the installation replaces another pollutant.

After a consultation period that expires on January 21, Brussels plans to present “as soon as possible”, but without a specific date, its final proposal through a delegated act, according to a Commission spokesman. This type of non-legislative decision, of a technical nature, can go ahead even without the unanimity of the Member States: it can only be vetoed with the rejection of a qualified majority in the Council (55% of countries that group together 65% of the population ) or the European Parliament.