If the electrical reform is approved as it is, the Federal Electricity Commission (CFE) It will require investments of between 406 billion and 512 billion to renovate the current plants and for a photovoltaic park., estimated the Mexican Institute for Competitiveness (IMCO).

While, in an alternative scenario in which CFE buys the additional energy through long-term auctions, where the private sector continues to participate and suppliers and large users can have long-term annual contracts, the federal government’s spending will be only 94 billion pesos.

In the document “The costs of the energy reform initiative”, the IMCO explained that considering that in 2020 the CFE had a market share of 38% in electricity generation and that the reform initiative considers increasing that percentage to 54%, there are three scenarios to consider. 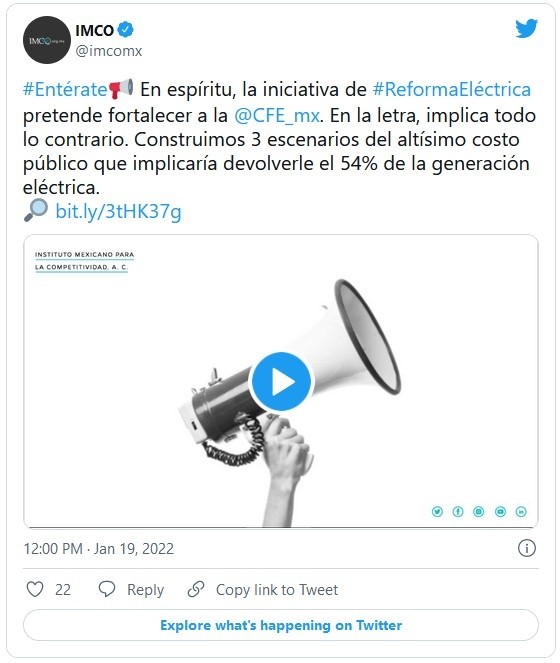 To which will be added the fact that, by increasing pollution, this will have costs for the population that will have to attend such as respiratory diseases, droughts and floods, which in 2028 can reach a value of up to 63 billion pesos.

The first is that the CFE will invest in the construction of the new photovoltaic park in SonoraIn addition to renovating 14 of the 60 hydroelectric plants and the rest of the demand will be covered by thermoelectric, coal-fired and combined cycle plants, this will imply a cost of 512 billion pesos for CFE.

The second scenario is that the plant factor of hydroelectric plants will be increased from 40% to 60%, It is also considered that it will be invested in the Sonora solar park and that the rest of the electricity demand will be covered with combined cycles, thermoelectric and coal-fired power plants, so CFE will need 406 billion pesos.

The third scenario proposed by the IMCO is an alternative one, in which Clean Energy Certificates are maintained without any change and in which long-term annual contracts of 15 years can be made for energy and power, as well as 20 years for the Certificates, so in this case the CFE will buy electricity from suppliers and large users, which leaves a cost of 94 billion pesos.

This means that the CFE will have to pay between 312 thousand to 418 thousand million additional pesos to which it will need if it buys additional energy from private plants to meet demand.

For the IMCO, approve the electricity reform initiative without any change it will have “negative repercussions on public finances, costs for Mexican consumers and effects on the environment.”

In environmental matters, the current initiative will mean that although Mexico has promised to reduce its greenhouse gas emissions by 22% and black carbon emissions by 51% by 2030, in the first scenario emissions would rise above those figures.

The IMCO stated that these emissions will have a monetary cost for society, especially because “in the absence of carbon prices or carbon taxes, the costs of emissions are not settled as such, they are observed and paid in their physical expressions as droughts, floods, respiratory diseases, etc.”, reads the document.