Before the derby, OL condemns a banner of its supporters 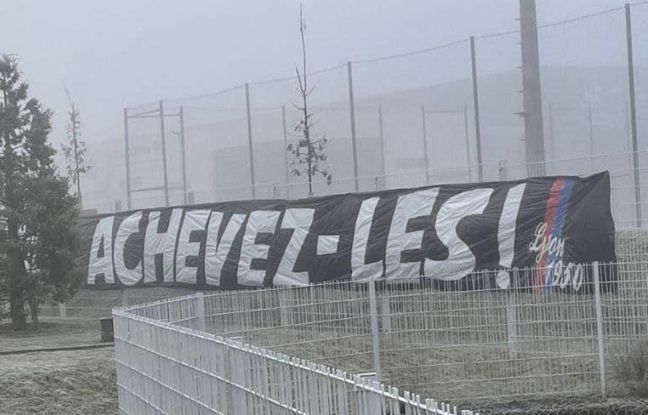 Three months ago, the Lyon supporters came, like every year, to watch the pre-derby training session, with smoke bombs and a banner: “Keep up the momentum… Push them! “. The images of this jubilation between players and groups of supporters were then relayed by OL on social networks. But the fiascos of the OL-OM and PFC-OL matches have since passed by and the famous pre-derby “folklore” is no longer welcome in the eyes of the Lyon leaders.

OL condemns the banner placed outside its infrastructure this Wednesday. No sporting rivalry can justify such remarks, even more so when they then take negative shape in our stadiums.

After having discovered, this Wednesday in front of the Décines training center, the banner of the Lyon 1950 group: “They are in agony… Finish them off! “, OL thus published a tweet to “condemn” this message.

“They are killing all the charm of the derby”

“No sporting rivalry can justify such remarks, even more so when they then take negative shape in our stadiums”, explains the club, which had until then never publicly pointed to other banners that have marked the history of the derby, like “Kill them” or “Les Gones invented the cinema… When your fathers were dying in the mines”. More than a thousand messages from Lyon supporters protesting the tweet of their favorite club quickly followed.

“It’s like that, the club is very zealous to show the League and the authorities that they are trying at all costs to calm things down in the stands,” said Jean-Pierre, a North Bend subscriber. They are all killing all the charm of the derby, and even football. “The Lyon supporters also had confirmation, this Wednesday via an email from OL, that their “match of the year” against the neighbors of Saint-Etienne would only be played in front of 5,000 spectators drawn by lot.