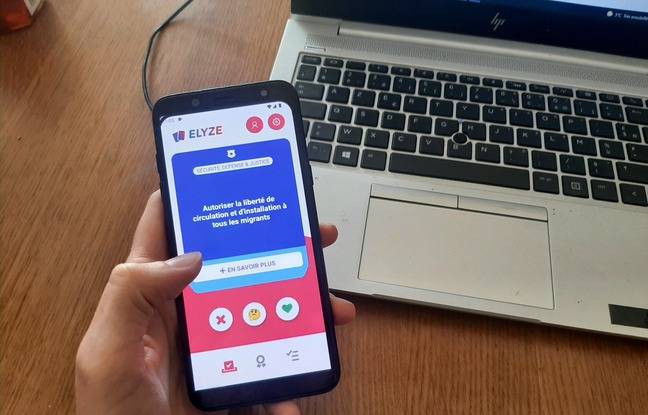 Does the new trending app for the presidential elections comply with “sensitive data” regulations? The CNIL, the French personal data policeman is currently looking into “Elyze”, this mobile application developed by two students and
top downloads since January.

This makes the users “match” with the candidates for the election. Like Tinder, we like or dislike bits of political programs without them being named. All of the answers indicate with which personalities involved in the race for the Elysée, the users agree the most and the least.

“The collection of this data is in principle prohibited”

The Cnil “cannot comment on the compliance of this application as it stands”. “We have been alerted and (…) we are examining its operation”, added the regulator, which reserves the possibility of “making use of its repressive powers” ​​in the event of a breach of the General Data Protection Regulations (RGPD) .

“In general, this type of application must provide strong guarantees to protect the data of its users”, explains the Cnil. “Compliance with these obligations is particularly necessary when sensitive data (data which reveal political opinions) is processed”, adds the regulator, specifying that “the collection of this data is in principle prohibited, except in exceptional cases, for example if the consent of people is collected”.

Some observers have noted negligence in data security and others question the collection of user responses and the storage of this data on an application server, at the cloud leader AWS (Amazon Web Services) .

The general conditions of use of the application indicate that it records the date of birth, the postal code and the gender of the user if he chooses to communicate them, as well as his answers to the political proposals. The application also reserves the right to resell this “always anonymized” data to third parties.

“No data is shared with Google and Facebook. The data is anonymous, the application does not individually identify any user,” Grégoire Cazcarra, one of the co-founders, defended on Monday. According to him, the saved data could be used for “scientific research” or if the application decides to offer new content, but “they are not intended to be provided to a party or a campaign team”.

He assures that “the starting point” of the project was “to fight a galloping abstention which increases election after election.