“If ‘Ulysses’ is not fit to read, life is not fit to live”: the best English-language novel of the 20th century still lives in Dublin

James Joyce (Dublin, 1882 – Zurich, 1941) was so superstitious that he wanted his Ulises It was published on the 2nd of 2nd, 1922. In fact, he was born on the 2nd of 2nd, 1882 and this whole novel takes place on June 16, 1904, the day he went out for the first time with Nora Barnacle (who would later become his wife). . The first copy of that first edition published by Silvia Beach in Shakespeare and Company, Paris, is exhibited at the MOLI in Dublin (Museum Of Literature Ireland) as one of its great relics and preserves the blue color on the cover intact, a blue almost identical to the one that gives shine to the flag of Greece, for that of winking at the main reference that the author handled: The odyssey of Homer, whose main character was Ulysses.

If Homer’s great epic of man in the eighth century BC consisted of crossing the Mediterranean fighting against species and beasts of all kinds until returning home after the war, Joyce’s epic of contemporary man in the twentieth century consists of overcoming a day in the city and also return home, after fighting against his own demons, lost in a narrative chaos measured, ordered and thought to the millimeter that its author took seven years to shape. Novel written in exile with the love for the hometown that distance usually grants, Ulises it was considered indecent by the majority of publishers who rejected it. To them and the critics (whom she still keeps entertained) who found the book obscene and unreadable, Joyce replied, “Yes. Ulises is not fit to read, life is not fit to live.” 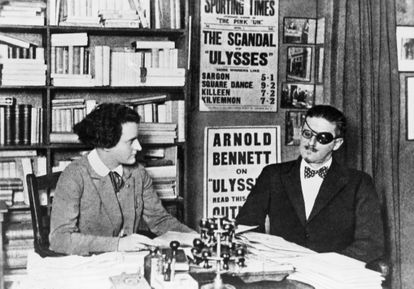 James Joyce and his publisher Sylvia Beach, who ran the legendary Shakespeare and company bookstore in Paris and published ‘Ulysses’.Bettmann (Bettmann Archive)

Ulises it is an imperishable classic whose reader discovers new things as he grows and rereads. Form and background merge. All in All. Language is in history and vice versa. The noises, the yawns, the digestion, the most inconsequential conversation, that impetuous dog… any detail is worthy of being sublimated, the most vulgar becomes venerable. That is probably why Jorge Luis Borges, in his poem Invocation to Joyce, he left lines like these: “We invented the lack of punctuation / the omission of capital letters / the dove-shaped stanzas / of the librarians of Alexandria / Ash, the work of our hands / and a burning fire our faith / You, meanwhile, you forged / in the cities of exile / in that exile that was / your hated and chosen instrument / the weapon of your art / you erected your arduous labyrinths / infinitesimal and infinite / admirably petty / more populous than history”.

Leopold Bloom, main character of the Ulises, goes for a walk through Dublin like the thousands and thousands of admirers who make a pilgrimage to the city every June 16 with the intention of making a route identical to theirs during the well-known Bloomsday, which lasts the same as the novel, 18 hours ( if you live, but 18 years, you know, if you read) and that begins at eight in the morning, when Stephen Dedalus has breakfast while his partner, the plump Buck Mulligan, shaves.

Among other things, Bloom will have fried pork kidneys for breakfast, will leave his house at 7 Eccles Street (whose original portal is intact in the courtyard of the The James Joyce Centre), attend a funeral at Glasnevin Cemetery (where Joyce’s father is buried), walk across O’Connell Bridge, see a ship carrying Guinness beer and a bullet of smoke, look at the clock on the building opposite, will think of his wife (the singer Molly), who at this hour of noon is still locked up with her lover (her road manager Hugh “Blazes” Boylan), you will see well-fed policemen, feeling so clogged by the weight of history you will put a potato in your pocket hoping it will bring you good luck, not being able to get into the Burton, you will get into the Dave Byrnes , and he’ll order a gorgonzola sandwich and a burgundy wine without being able to get Molly out of his mind, and he’ll eat remembering how he proposed to her. 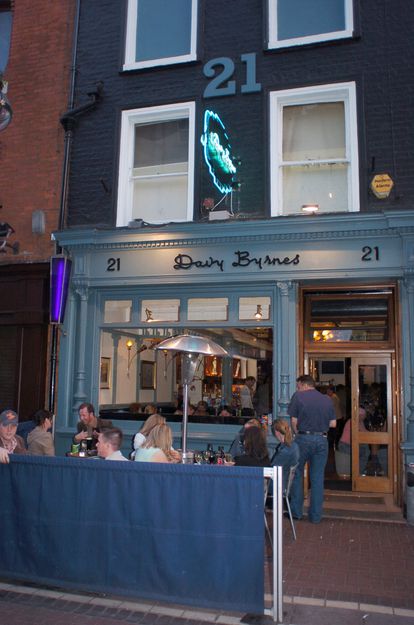 Then, on the way to the National Library, he manages to avoid a clash with Molly’s lover and buys her (yes, oops!) a bar of lemon soap at Sweney’s Pharmacy, and goes to the newspaper where he works as an advertising agent. and at dinner time she will meet Stephen Dedalus and accompany him to a brothel before taking a lonely walk into eternity and going to bed at two in the morning.

But beyond the classic Bloomsday route, there are other ways to tour Joyce’s Dublin. “When I die, Dublin will be written on my heart,” he wrote. To this day it is not known who owes more to whom: Joyce to Dublin or Dublin to Joyce. Without a doubt, this city is the great character of his literary career, present in his four great works: Dublineses (1914), Portrait of the teenage artist (1916), Ulises The Finnegans Wake (1939). To start, you should visit the James Joyce Centre, an exciting place that on its three floors reproduces the atmosphere and furnishings (almost entirely original) of Joyce and Nora’s rooms in Pola, Trieste, Paris (where the author ended up Ulises) or Zurich (where he is buried). also sold Romping through Ulysses, an instruction manual for behaving like a joyceano copy in which instructions are given to dress appropriately (hat, round glasses, Edwardian style suit) and go point by point Leopold Bloom’s sentimental map. 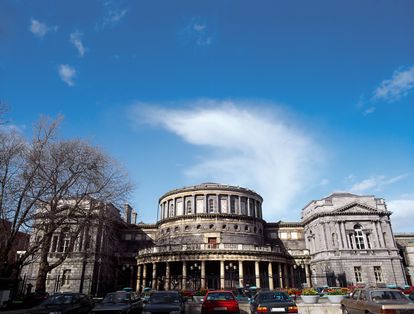 Any route under the indications of the guides of the James Joyce Center will show valuable details of the affinity between Joyce and Dublin, such as the Volta cinema (founded by Joyce himself in 1909 on Mary Street), the hotel where Nora worked when they met, the Joyce’s statue on North Earl Street sculpted in 1990 by Marjorie Fitgibbon, Stephen’s Green (the park that Joyce snatched and wrote “that’s my favorite green”), the Cabmans Shelter where Bloom and Dedalus have coffee, the Belvedere College to which Joyce went, the Gresham Hotel on Upper O’ Connell Street (final location of the famous tale The dead), the church of St. George whose bells resound “heigho heigho” in Ulises and in Dublineses, Barney Kiernan’s pub (where Bloom meets The Citizen, nickname of the real character Michael Cusack, nationalist pedagogue founder of the Gaelic Athletic Association) or the Ordmond Hotel, the ideal place to refresh Joyce’s taste for composition Matched me (from the opera Martha or the Richmond fair) with music by Friedrich von Flotow and libretto by Friedrich Wilhem Riese, and which Leopold listens to at the end of the day.

Another unique way to get acquainted with Joyce’s Dublin (and the rest of the Irish writers, as Dublin was designated a UNESCO city of literature in 2010) is to attend the routes organized in The Duke pub, a classic in the center of Dublin, or visiting the bookstore (of course) Ulysses Rare Books, of which Joyce was a client, as were Bono, Anne Enright or John Boyne. The Dublin Literary Pub Crawl are dramatized literary routes that make good that teaching of Samuel Johnson who said “no one in Ireland goes to a place where you can not drink”, because if Paris has its cafes, Dublin has its pubs. And if every episode of Ulysses has a style, every Dublin pub has its own atmosphere. In Joyce’s time there were 4,000 pubs in Dublin. Today there are about 800 left. 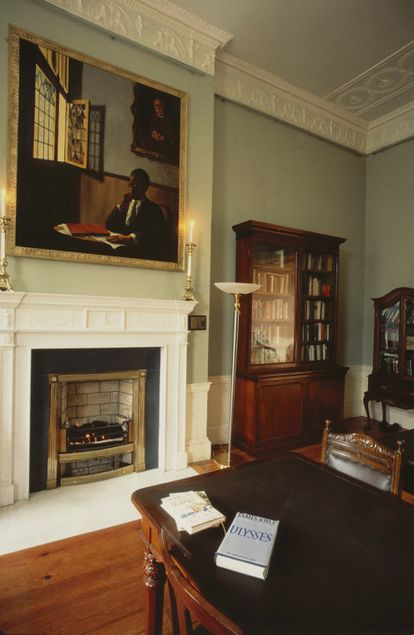 Colm Quilligan, author of Dublin Literary Pub Crawl: A Guide to the City’s Most Famous Pubs, is clear: “In the pub the loyalties and friendships are greater than at home. In Dublin, the owner of a pub writes letters of recommendation to his clients when they apply for a new job and, of course, can mediate with the police to save them in case they have inadvertently broken the law. Like churches, they are confessional centers.” The Duke is the starting point for all the routes, which accept a maximum of 20 people and take place between 7:00 p.m. and 10:00 p.m.: a pilgrimage through different pubs, where you drink and one follows the trail not only of Joyce, but also of Samuel Beckett or the great Edna O’Brien, whose characters in The girl with green eyes (2014) also go inside art Deco from Dave Byrne to take Pernod. The sensational O’Neill’s, halfway between Trinity College and Temple Bar and Grafton Street, was a bastion of the poet Brendan Kennelly, for whom poetry was the last democracy. When his doctors warned him to stay away from pubs and stop drinking because he risked dying within a year, the poet replied that he had to think long and hard about it, because a man can drink a lot in a year.

Brendan Behan, Eavan Boland, Seamus Heaney, Patrick Kavanagh, Flann O’Brien, Paula Meehan, George Bernard Shaw, John Millington Synge, Jonathan Swift, Oscar Wilde and William Butler Yeats are continually evoked. Also Joyce, of course, and especially chapter 8 of the Ulises, The Laistrygonians, that moment when hunger scratches at Bloom’s insides. And speaking of the matter, when Proust and Joyce once met, whose rivalry was notorious, they had a high-flying conversation: Proust told him about what it cost him to fall asleep and Joyce about what it cost him to digest.

As Borges said at the end of his Invocation, memory also has its talismans, its echoes of Virgil, “and so in the streets of the night endure / your splendid hells / so many cadences and metaphors of yours / the golds of your shadow / What does our cowardice matter if there is on earth / a single brave man / what does sadness matter if there was in time / someone who said he was happy / what does my lost generation matter / that vague mirror / if your books justify it / I am the others / I am all those / who have rescued your obstinate rigor / I am those you do not know and those you save”.

“At the Davos Economic Forum, there will be a lot of talk about geopolitics, since it is now what sets the course”

Bustle for the Utrecht police: many shoplifters and pickpockets | NOW

Seven years imprisoned in Mexico for an injustice

Weather in Tlaquepaque today: the forecast for Monday, May 23, 2022