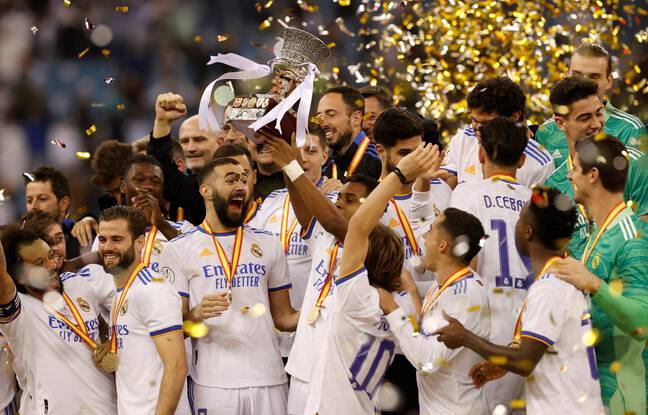 In Madrid, Karim Benzema remains the king. Breathtaking since the start of the season and still decisive on Sunday in the final against Athletic Bilbao (2-0), the center-forward carried Real to their 12th Spanish Super Cup in Riyadh, Saudi Arabia. With this victory, the Frenchman lifted his 20th trophy with the Merengues.

After the opener of the indestructible Luka Modric, who converted from the right a good foray by Rodrygo into the Basque area (38th), Benzema sealed the coronation of his club by transforming a penalty he himself provoked with a shot that hit the arm of Yeray Alvarez in the area (52nd). And after Eder Militao was sent off on a red card for a hand in the area at the end of the match, Thibaut Courtois, impeccable, stopped Raul Garcia’s penalty in the 88th.

RDV on February 15 with PSG

A month before facing Paris Saint-Germain in the Champions League (February 15), Real, leader of La Liga and still in contention in all competitions, begins its second part of the season brilliantly with this first title of the season . It is also the first gleaned by Carlo Ancelotti since his return to the merengue bench, last summer, after the departure of Zidane.

The figurehead of this white vessel is therefore called Benzema. The Frenchman, sparkling since the start of the season with 24 goals and 13 assists in 27 games in all competitions, was the first to alert Unai Simon in the 19th minute with a curling shot that barely flew out of bounds. Against his favorite prey – Benzema has scored 18 goals against Bilbao in all competitions since his debut, the captain of the Merengues, has moved one step closer to the podium of the top scorers in the history of the club, five behind legend Alfredo di Stefano (308 goals).

A record for Modric

At his side, it is another innkeeper of Real who illustrated himself on the lawn of the international stadium of King-Fahd. Croatian Luka Modric scored his first goal of the season at the best of times. The 2018 Ballon d’Or was on the downward slope two years ago, stuck between repeated injuries and the bench… But according to the Spanish press, at Real, negotiations are already underway to extend the eternal Croatian playing master, imperial in the middle of the field on Sunday evening. At 36 years and 129 days, Modric has even become the oldest scorer in the history of the Super Cup, ahead of Aritz Aduriz and Raul Garcia (both 34 years and 187 days).

The year 2022 therefore starts in the best possible way for Real. Above all, Ancelotti knows the path to follow to achieve an almost perfect course: in 2014, the club with “Carletto” won the Spanish Cup, the Champions League, the UEFA Super Cup and the Club World Cup. .