Queen Letizia’s huge wardrobe is used to receiving news frequently. However, this time the wife of Felipe VI wanted to give a surprise by choosing a design vintage which has aroused interest because it previously belonged, curiously, to his mother-in-law, Queen Sofia.

This special nod took place this Tuesday, January 17, in the second great act of the year for the King and Queen of Spain: the reception for the diplomatic corps held at the Royal Palace in Madrid. The event requires, like the Military Easter that is celebrated on January 6, a morning suit for the gentlemen and a long dress or suit for the ladies. The Queen has fulfilled the tradition and for this she has rescued a 1977 dress from Queen Sofía. A design by the firm Valentino – a brand that Doña Letizia does not usually use frequently – that the mother of Felipe VI wore during a reception of the then Kings in Germany with Walter Scheel, who was its president between 1974 and 1979. The King and Queen of Spain at a reception with Walter Scheel, President of Germany, at Gymnich Castle in 1977. United Archives / Wolfgang Kühn (Wolfgang Kuhn/United Archives vi)

The dress, from 45 years ago, is made up of a semi-transparent white chiffon body embroidered with pink flowers, long sleeves, ending in a pink waistband and from which a large green satin skirt starts.

Queen Sofía has used the outfit on at least two occasions, the first being in 1977 and another undocumented time, accompanying it in both situations with large jewels: the first time with diamonds and the second with matching necklace, bracelet and earrings. sapphires and, again, diamonds. However, her daughter-in-law has opted for a simpler outfit and has been seen wearing red and green stone earrings, in addition to the gold ring that always accompanies her, by designer Karen Hallam. 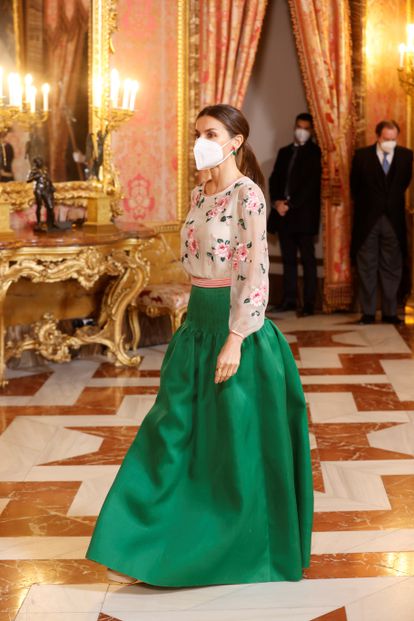 Queen Letizia, during the reception for the accredited diplomatic corps in Spain, in Madrid, on January 17, 2022. JUAN CARLOS HIDALGO (EFE)

This is not the first time that Letizia has made a similar gesture, which combines ecological awareness and winks at her mother-in-law. Just four months ago, at the beginning of last September, she decided to wear a dress that Queen Sofía wore at an event in Rome in 1981, this time for a reception at the Zarzuela Palace with the President of Chile, Sebastián Piñera. In addition, three years earlier, in January 2018, the current queen could be seen in a family photograph during the emeritus king’s 80th birthday celebration in a long-sleeved, roll-neck, striped-print dress that was once part of the style. Queen Sofia’s wardrobe, and that she had worn it in November 1984, at the age of 46, the same age as Letizia at that time. While the queen wore high-heeled shoes, Felipe VI’s wife accompanied him with high red boots. Just a few months later, in December 2018, Queen Letizia wore a red dress with puffed sleeves at the National Fashion Awards that Doña Sofía had already worn in an audience at La Zarzuela 36 years earlier, in the spring of 1982. 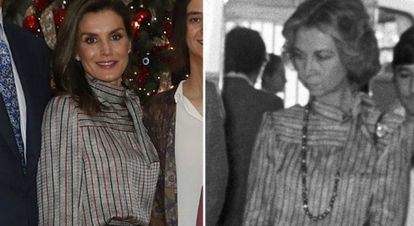 On the left, Queen Letizia on January 5; and on the right, Doña Sofía in 1984. GTRESONLINE / EFE