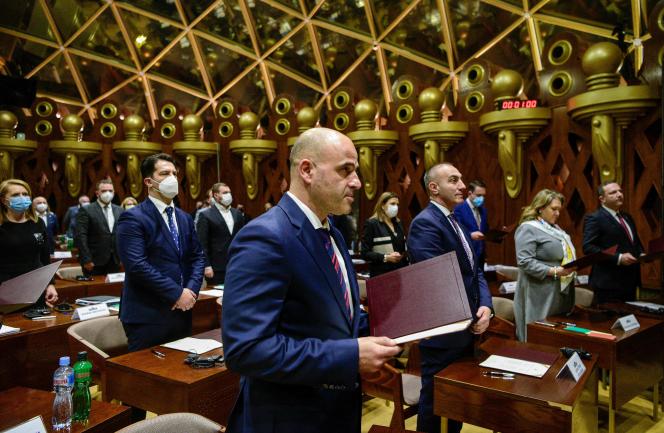 The country had been in political crisis for two months. The Parliament of North Macedonia finally elected, on Sunday January 16, the Social Democrat Dimitar Kovacevski as Prime Minister. The new coalition government, led by the Social Democratic Party (SDSM) of Mr. Kovacevski, was supported by 62 deputies against 56.

Deputy Finance Minister in the previous government, Mr. Kovacevski succeeds Zoran Zaev, who resigned in December after his party suffered a heavy defeat in the municipal elections.

In presenting his program to Parliament on Saturday, Mr. Kovacevski, 47, assured that his team’s priority objective would be “sustainable and stronger economic growth”. The one who took the head of the SDSM in December also promised to tackle the country’s energy crisis and to try to get closer to the European Union (EU).

The previous government, also led by the SDSM, survived a vote of no confidence in November after weeks of negotiations with smaller parties. Since then, the opposition has accused the government of lacking legitimacy and called for early elections. Mr. Kovacevski repeated that the poll would take place as planned in 2024.

The challenge of joining the European Union

In his role as deputy finance minister, Mr. Kovacevski, a doctor of economics, did not stand out. Political observers have questioned his ability to negotiate the challenges facing the country.

In domestic politics, he will have to deal with the complex relations between the parties of the coalition and fight the corruption which hinders the country’s economy. In foreign policy, the main challenge should be to advance the talks for membership of the European Union, blocked by the opposition of Bulgaria.

In 2019, the country added “from the North” to its official name to distinguish itself from the Greek province of Macedonia. This change, a prerequisite for opening the way to EU membership, allowed it to join NATO. But due to disputes over historical issues and the origin of the Macedonian language, Bulgaria continues to obstruct EU membership.